Is There Really Anything Else to Say? 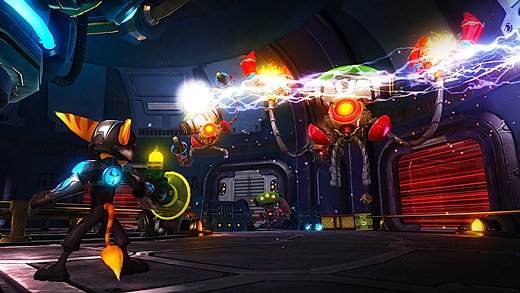 LOW Stupid, useless Qwark getting in the way all the damn time.

WTF The Great Clock must be protected from those who would abuse it—I get that. But then Clank seems to have no problem using it for himself and Ratchet.

Is there value in repetition? Can a game simply be more or less a copy of its predecessors and still have merit on its own? That is the quandary I pose to you when considering Ratchet & Clank Future: A Crack in Time. In my opinion the series peaked two iterations ago with Up Your Arsenal and has been on a steady plateau of quality since then. As with Tools of Destruction, the player knows what he's getting into assuming he's played any of the previous versions of Ratchet & Clank. Insomniac's flagship series has long been a standard-bearer for 3D platforming, and A Crack in Time is no different. Each PlayStation 2 sequel introduced something new to the mix that managed to keep things feeling relatively fresh, such as Up You Arsenal's multiplayer. Tools of Destruction on the other hand didn't really bring anything new to the table other than being really, really, really pretty. So does A Crack in Time carry anything that justifies going back to that plateau we've been to five times before?

The game picks up right where Tools of Destruction left off—Clank has been whisked away to the center of the universe, and it's up to Ratchet to find him along with discovering the legacy of the lost Lombaxes. While the characterization has long since moved on from the first game's "furry mascot with an attitude" getup, it still isn't the stuff of greatness. Everyone acts as expected, plot twists are seen coming a mile away, and Qwark is still going to be at the phony hero bit. I do realize that Qwark is kind of a mainstay in the series, but his act is really getting stale now, and I'm constantly left wondering why he keeps getting chances to screw Ratchet over. And on top of that, he always gets in the way of my shots and alerts enemies before I want him to. Other than that, the trademark wit and charm of Ratchet & Clank is still present, even if it feels old.

As I mentioned before, Tools of Destruction was one of the best looking games I've ever played. A Crack in Time is no different, with Pixaresque goodness at every turn. The Great Clock, a giant cluster of gears and glass floating in space, is probably the best level I've ever seen Insomniac produce, and that's saying something given their previous work. Every gorgeous environment is rendered smoothly, with little to no framerate slowdown or other technical problems. Nobody does this sort of art style quite like Insomniac, and they haven't even come close to losing their edge in this regard. 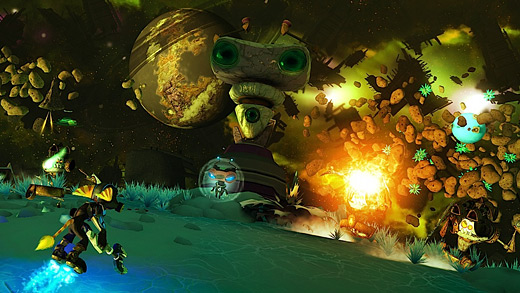 That said, all the prettiness in the world can't prevent A Crack in Time from feeling like it's just going through the motions. As I said, the series feels like it peaked with Up Your Arsenal, and if you've played any of the Ratchet & Clank games, you've seen it all before. Wrench bolt puzzles? Done it. Groovitron ball? Done it. Mr. Zurkon? Done it. Villain voiced by a former Star Trek actor? Done it. Same villain in fact. New version of the RYNO? Done it. Hoverboots? Done…wait, hoverboots?

OK, this is new. The hoverboots are a welcome addition to Ratchet's bag of tricks, and the segments involving them are among the most enjoyable in the game. The various ramps and winding paths throughout the game provide great opportunity to fling yourself through the world at breakneck speed with a certain doom waiting below. I found myself really looking forward to these portions, and ultimately they really help keep things lively. Another new feature is Clank's time puzzles, which provide a nice break in the more standard platforming action, and are the best pure puzzles I've seen in the whole series. And of course, any time I got to spend running around the Great Clock was a treat. Still, the rush from the old Ratchet & Clanks hadn't shown itself yet.

I'm very disappointed that Insomniac decided to abandon the multiplayer portion that was in Up Your Arsenal and Deadlocked. Given the kind of zany weapons found throughout the Ratchet & Clank universe and Insomniac's propensity for churning out excellent maps, this was a feature I was really hoping they'd come back to. Someday I'd like to see them make a multiplayer-focused game and take full advantage of what they've already created, which I think could be truly great. But I digress. As I neared the end of the game, I couldn't help but be underwhelmed. I had my mind made up. A Crack in Time is a solid title to be sure, but the most glorious days of the series are behind it. That, in fact, was going to be the last sentence.

But then I got to the ending.

Let me preface this with something—I am a sucker for bosses. They can damn near make an entire game for me. They're one of the biggest reasons I'm sold hook line and sinker on the new 8-bit style Mega Man games. The bosses in Ratchet & Clank however had always seemed on the cusp of greatness, but never quite reached it. That changed with A Crack in Time. While most of the game's bosses are fairly nondescript, the final two are exactly what I was waiting for. Fast-paced, multi-faceted, and grandiose in scale, these battles were, in a word, awesome. I wish that they weren't broken up into save points and that things could be a little more challenging, but I'm willing to let it slide just this once because I was so pleasantly surprised. This is one of the very rare cases where endgame content significantly altered my opinion of a game, and I'm glad it did.

So in the end, is it much of an innovator? Absolutely not. Is it any sort of landmark achievement? Not in the slightest. It is however, what Ratchet & Clank has always been, and there's value in that. Rating: 7.5 out of 10.

Disclosures: This game was obtained via retail store and reviewed on the PS3. Approximately 11 hours of play was devoted to completing the game once. There are no multiplayer modes.

Parents: This game has been rated E10+ by the ESRB. This is a good game for kids—nothing questionable in the slightest.

Deaf & Hard of Hearing: All spoken dialog can be subtitled, and there are no significant audio cues.