"Any fool can make things bigger, more complex, and more violent. It takes a touch of genius—and a lot of courage—to move in the opposite direction." —Albert Einstein 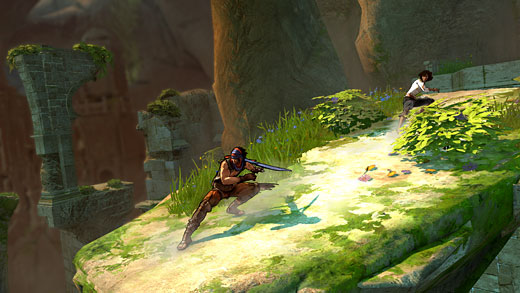 WTF The final "battle" where your opponent is apparently a drunk Pokémon on steroids.

Since its resuscitation way back in 2003 with Sands of Time, the Prince of Persia series has been nothing short of brilliant, even counting The Prince's unfortunate emo phase. Its smooth, acrobatic platforming along with scintillating aesthetics (again, minus the Godsmack-driven Warrior Within) make it an absolute treat. With Prince of Persia, Ubisoft is again trying to reinvent The Prince, and without the help of any name changes or unpronounceable symbols. The results are a mixed bag; parts of the game are monotonous and severely lack challenge. However, they are outweighed by advancements that will ultimately make the series, and possibly games as a whole, better in the long run.

This installation of Prince of Persia features a brand-new story, completely separate from the Sands of Time trilogy. The player again takes on the role of The Prince, but a very different one. While walking through the desert searching for his lost donkey, he runs into Elika, who is in turn running from some guards, who…..well, if you want the details you'll have to play the game, or at least look it up on Wikipedia. In a nutshell, the story is mostly acceptable although it doesn't quite measure up to Sands of Time. In any case, Elika is The Prince's new best friend, and within her lays both the true marvel of Prince of Persia and one of its greatest flaws.

The trademark acrobatics that have made the series great make a return here. The Prince runs, jumps, climbs, and otherwise scales obstacles with ease. The control scheme is as intuitive and natural as the other games in the series, so I was wall-jumping with the best of them in no time. Elika always follows right behind The Prince (curious, since The Prince has never been here before and she has) and provides hints, directional assistance through her compass ability, and generally enjoyable back-and-forth dialogue. Oh, and then there's that whole life-saving thing. Anytime The Prince takes a bad step Elika will swoop in and save him, like his own personal super hero. A fall in any place results in being taken back to the last piece of solid ground before the current set of obstacles. In other words, Elika will save The Prince from any fall, anywhere, and at any time. At first, this was completely mind-boggling. Why on Earth would they make death literally impossible? As I played on, however, I began to understand what I was seeing—Elika's role in platforming is absolutely brilliant.

Let's take a step back for a second and ask a question—what is a death video game? In the simplest terms, a death is a failure. Failure always carries some kind of penalty, like being forced to go back to the beginning of a level, a loss of some kind of resource, or having to reload the game from the last save. With Elika, that annoying middleman is cut out of the process. When I fail, the penalty is to be taken back to the beginning of the obstacle set that I failed to get through, without any annoying reloading or being asked to continue. This removes a lot of unnecessary frustration while keeping the intended challenge intact. There were quite a few instances where I missed a jump or hit the wrong button during an obstacle sequence, and having to reload my game every time would have been maddening. In fact, in Ubisoft's other Prince of Persia games, the time-reversal power gave me the ability to go straight back to the post or wall overhang that I jumped from to my impending death. Elika, on the other hand, takes me to the last piece of flat ground I stood on regardless of where I fell, so in some ways the penalty for failure is greater than the previous games. In any case, Elika is a welcome method of streamlining the failure process to minimize the player's frustration. 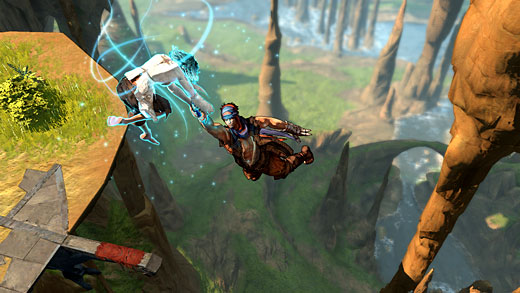 While she is golden in platforming, Elika has to settle for a corroded bronze in combat. In fact, combat in general is an area where the game could have used a little more work. The controls work well, as I never had any problems using The Prince's and Elika's abilities; the problems lie in the nature of the battles themselves. One of Ubisoft's stated goals during development was to make each battle a memorable event rather than just another encounter, and thus The Prince never faces more than one opponent at any given time. This is a great idea, but unfortunately the battles just aren't all that memorable. There are four main enemies in the game, each of which players must defeat six times before they can face the final boss, and each battle with them is essentially the same. To top things off, they all have the same abilities and tactics with a few slight variations. Even the quicktime events that occur when fighting them are identical. Their connection to the plot is also minimal, as only one of them allows for any insight into The Prince's and Elika's characters.

Getting back to Elika, her role in combat is the same as the rest of the game: to save The Prince if he is about to die. A death event occurs whenever The Prince fails to execute a certain quicktime event during the battle—"Press X To Not Die" quite literally. If Elika is forced to step in and save the day, The Prince and his opponent are moved to separate sides of the arena, and the enemy regains a small to moderate amount of health. Thus there is virtually no penalty for failure. Missing a jump or failing to grab onto a ledge is appropriately punished by forcing the player to start that sequence of events over. Failing in battle, however, incurs almost no punishment whatsoever. The enemy regaining their full health would have been ideal, as it would have been the same as being killed, reloading the game, and beginning the battle again.

However, even with the combat problems the most annoying part of the game by far is the collection of lightseeds. When an area is cleared, lightseeds appear in all manner of locations in the level. The Prince must collect lightseeds in order for Elika to acquire new powers, which are needed to access more parts of the world. This extended fetch-quest became extremely tedious, as I was forced to go back over the level I had just completed to find them; going back through the same obstacle set again and again looking for those last two or three that I missed was especially taxing. Fortunately I wasn't required to collect more than the minimum amount of lightseeds needed to gain new powers, and after I had enough to complete every area the experience became much smoother.

The game is not without its share of problems. Yes, collecting lightseeds gets incredibly boring after a while. Yes, Elika removes a lot of the challenge from combat, although this problem could have been tempered by simply giving the enemy their full health back in the event of being saved by her. In platforming, however, Elika is a godsend. With her, Ubisoft has revamped the failure process so that it is almost completely devoid of needless frustration and redefined the concept of death in games. The most common initial reaction to her (including my own) is shock at the apparent lack of difficulty she brings, but Elika's role is what makes Prince of Persia brilliant, and quite possibly transcendent. Rating: 8.0 out of 10.

Disclosures: This game was obtained through retail purchase and reviewed on the Playstation 3. Approximately 12 hours were dedicated to completing the game once.

Parents: According to the ESRB, this game contains violence, suggestive themes, mild language, and alcohol references. Young children might get the spooks from some of the monsters, but beyond that I didn't see anything to be concerned about.

Deaf & Hard of Hearing: All spoken lines are subtitled, and the audio is not a significant factor in gameplay.

I’m still very sceptical about the “no reload” approach, but at least the guest critic’s review helpfully discusses this unorthodox design choice in some detail. Apart from the penalty issue, another reason why I’m not exactly thrilled about the new PoP (and thus won’t play it anytime soon) is that the new “Prince” seems to be such a total dork. Apparently, he is depicted as some kind of unsophisticated ragtag adventurer who inadvertedly offends the decidedly more aristocratic Elika’s delicate sensibilities. The supposedly funny “odd couple” dynamic comes off as tired, uninspired and utterly lacking in intelligence, maturity and poignant… Read more »

Your comment would have been better if you quoted Einstein.

Any fool can quote Einstein to make a reviewer look smart. How did that dumb idea pass the site’s filter?

This site ain’t worth reading anymore.

You spend almost all of the review touting how you cannot die like it’s the second coming. Prince of persia – the sands of time, had a rewind feature that did the EXACT SAME THING, and you could control it! I am not a fan of really hard games but the prince of persia series have never been overly difficult, so who cares anyway if you can’t die. You think they have courage by dumbing down a game only to make money from a casual audience (the director said this himself, and ubisoft have made an announcment about all their… Read more »