Remember, the Enemy's Gate is Down 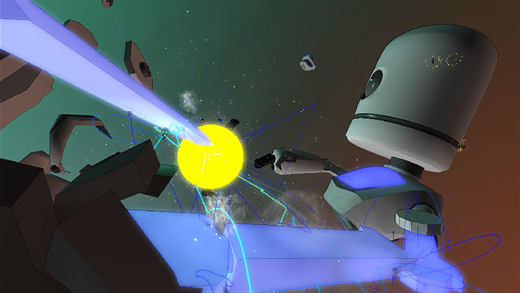 HIGH: Chasing an enemy all over the level and finally catching him.

LOW: Getting killed when there's no way I can see it coming.

WTF: The level with the two giant unreeled cassette tapes.

"Robot ninjas flying through space trying to kill each other so they can explode and become more powerful."

If the previous sentence didn't make your gamer parts tingle then you seriously need to look into whether or not you are a person.

Beatnik Games's Plain Sight is nothing if not straightforward. The very first image I was presented with once I got to the title screen was a cute little robot with a big blade who looked like he was just itching (metaphorically of course, since robots clearly cannot itch) to take some heads off.

I proceeded to enter the tutorials. My objective? Charge up, run headlong into the opposing robot ninja, and destroy him. Now do it with a moving target. Now multiple moving targets. Now pick one of these maps to practice on while doing the same thing. Then blow yourself up to get points and kill as many hapless onlookers as possible.

Game, you had me at robot ninja.

A multiplayer-only title, Plain Sight relies upon the sense of controlled chaos that is essential to any good large-scale multiplayer environment. Players zip and zoom along gorgeous maps that look like they might have come right of an M.C. Escher painting, perversely twisting the laws of gravity well past their limits. Locking onto another player and tracking him all the way across the map to finally nail a fully-charged rush on him is an absolute blast.

Even while soaring from point to point without touching the ground for what seemed like forever, I always felt like I was in full control of what was going on. The sights and sounds of all the other players flying by, doing battle, and exploding themselves fulfilled the chaotic part of the agreement.

In addition, gameplay strikes a nice balance between risk and reward. In order to gain points, the player must kill more enemy robots, then explode. Get blasted before exploding and all that hard work is gone. On top of that, the robot becomes a bigger target as he gains more power, meaning all the little fish in the pond will soon be gunning for him. Knowing the right time to explode (that would make an awesome band name, by the way) is key, as going too long without exploding can spell disaster—kind of like The Weakest Link. (And before anyone asks, yes, there is a similar game mode called The Weakest Clink where each team has a shared score.)

The experience isn't totally flawless, mind you. Many skills like the ability to repel attacks and sense incoming rushes are bought with points earned from, you guessed it, killing other robots. This must be done every single time a new game is started. While it certainly makes sense to reward players for doing well (and I can understand the motivation behind making all of these powers point-driven) some of the abilities would probably be better off coming at the start of every match—especially the warning indicator. The beginning of matches were sometimes very frustrating since I simply couldn't see whenever a scheming enemy robot ninja had his eyes set on my precious energy.

Another area I found lacking is the….um….lack of players on the PC version's dedicated servers. It may just be my location, but rarely have I found more than one or two servers on the list that are even close to full. There are lots of results that come up when I search for places to play and most of them even have decent latency, but the low number of players makes it difficult to enjoy a multiplayer-centric game. However, I can't really fault the game for this as they don't control who plays it, nor who is willing to host a game.

All of that aside, doing battle with ninja robots in space while telling physics to take a hike is definitely a winning formula. It's simple, fairly balanced, and damn near endlessly replayable, just as any multiplayer game should be. Well, done Beatnik Games, well done. Rating: 8.5 out of 10.

Disclosures: This game was obtained via publisher and reviewed on the PC. Approximately 3 hours of play was devoted to multiplayer modes.

Parents: At the time of this writing, this game has not been rated by the ESRB. There's nothing here for the kiddies to be scared of.

Deaf & Hard of Hearing: There are no spoken lines and no significant audio cues.