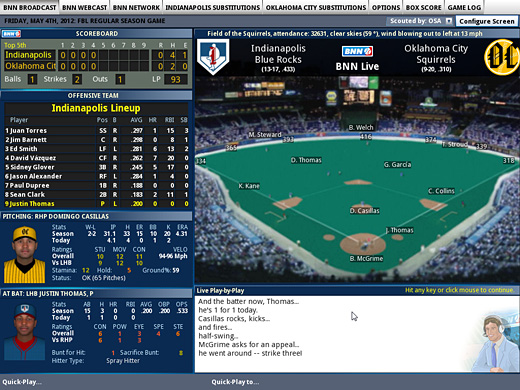 HIGH Making a choice on whether to hang onto a young, promising minor leaguer or trade in the hopes of making the playoffs.

LOW Being overwhelmed by the sheer number of options and information available.

I love baseball. Anyone who has the misfortune of following me on Twitter when I'm in Cardinals rant mode should be well aware of that. However, baseball video games and I have surprisingly never gotten along. Playing the games is never as satisfying as watching actual games or even playing impromptu softball. Personally, I've always been more interested in the management side (trades, roster management, drafts, etc.) in baseball titles, and that always takes a back seat to the in-game simulation until now. Out of the Park Baseball 14

, the latest entry in the series, still hits that same sweet spot.

The Out of the Park series covers just about every element one could expect from working in a MLB front office without actually working in an MLB front office. Everything including roster construction, trades, drafting, scouting, financial restrictions—even in-game strategy is covered here. The player can take control of literally everything involved in running the team, right down to ordering a hit and run, or telling a batter to take a pitch.

For the seasoned baseball nerd, this is wonderful. Being a (literal) armchair GM is exactly what I've always wanted out of a baseball game. My team is humming along, slowly working up from being a perennial loser to contention, and when that breakthrough season finally happens, I have a special kind of satisfaction.

In my previous review for OOTP 13 I criticized the lack of appeal to newer players, as the cramped UI and flood of information can be pretty overwhelming, even to me. However, after thinking about it some more and playing the sequel, I've come to accept that a game like this just is not designed for mass appeal, nor should it be. This is a game made by baseball nerds for baseball nerds, and there's nothing wrong with that.

That said, some UI redesign couldn't hurt in future titles. With the amount of data on the screen the interface can become very cramped, at times looking more like an Excel spreadsheet with a few buttons and dashes of color. Navigation isn't much better, as I often find myself getting lost and having to go all the way back to the home screen. In an age where web design is marked by clean, silky smooth interfaces, a little bit more work in this area would be welcome.

For someone like me who revels in the details of the game and who will also watch a contest between two terrible teams for the entertainment value, this is a wonderful feeling. Being able to run one's own team with such a level of control and watch it succeed (or fail miserably) is the absolute height of baseball geekdom. Out of the Park Baseball 14

, like it predecessors, does exactly what it sets out to do-it provides the hardcore fan with the most detailed front office sim experience possible. Once I got into the ebb and flow of managing my team, it was sheer baseball nerd nirvana, and there's a lot of value in that. Rating: 7.5 out of 10


Disclosures: This game was obtained via publisher and reviewed on the PC. Approximately 10 hours of play was devoted to single-player modes and no time was spent in multiplayer modes.

Parents: At the time of this writing, this game has not been rated by the ESRB. However, OOTP 11 received an E rating, and I saw nothing even slightly objectionable in this game.

Deaf & Hard of Hearing: There are no spoken lines or audio cues. The entire game is text/graphical interface-based, so you'll be fine.

I’m starting my 17th season (2029) with the Padres and in that time I’ve turned them into a perennial contender in a small market with reduced ticket prices, with three World Series’, while fighting off the behemoth Dodgers (8 postseason appearances in the same timeframe, no championships – woot!). I’ve achieved a level of success commensurate with the Cardinals of the last 15 years, so I’m calling that realistic. I’m playing fiscally prudent, with an emphasis on young talent, and having a great time. I disagree with your criticism of the UI, though maybe I just don’t know any better.… Read more »