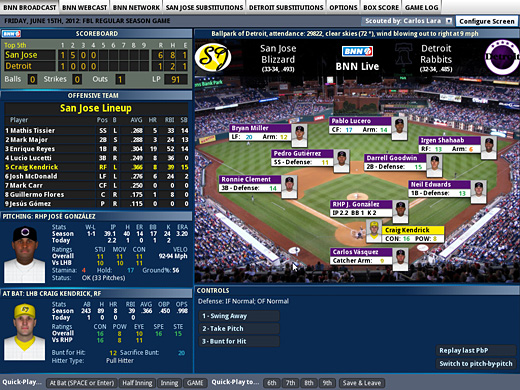 HIGH: Having to make a tough roster decision when a player came off the disabled list.

LOW: Being overwhelmed by the sheer number of options and information available.

I like baseball. Anyone who has the misfortune of following me on Twitter when I'm in Cardinals rant mode should be well aware of that. However, baseball video games and I have surprisingly never gotten along. Playing the games is never as satisfying as watching actual games or even playing impromptu softball. Personally, I've always been more interested in the management side (trades, roster management, drafts, etc.) in baseball titles, and that always takes a back seat to the in-game simulation until now. Out of the Park Baseball 13, the latest entry in the management-focused sim series, scratches that itch like no other game has.

OOTP13 covers just about every element one could expect from working in a MLB front office without actually working in an MLB front office. Everything including roster construction, trades, drafting, scouting, financial restrictions—even in-game strategy is covered here. The player can take control of literally everything involved in running the team, right down to ordering a hit and run, or telling a batter to take a pitch.

Eventually I was going through game after game, stopping only to manage the roster/disabled list occasionally or read something my scouting director sent over. When the draft rolled around I giddily agonized over who I was going to take, and I made a hard choice to trade a good young prospect for a starting pitcher with an eye towards making the playoffs. My baseball machine was humming along swimmingly, and I kicked back in my GM chair as I imagined all the executives, scouts, and coaches that were toiling to make my team philosophy a reality. When the minutiae of managing all the little aspects of the game becomes more familiar, OOTP13 really hit a sweet spot.

For someone like me who revels in the details of the game and who will also watch a contest between two terrible teams for the entertainment value, this is a wonderful feeling. Being able to run one's own team with such a level of control and watch it succeed (or fail miserably) is the absolute height of baseball geekdom. However, the number of potential players who fit that mold is quite small, and the game does not make much of an effort—if any at all—to rope in new players.

To put it bluntly, this game is made for people who are already serious baseball fans and want the general manager/field manager experience. If one isn't familiar with the definition of WAR or the infield fly rule, then there won't be much of interest here. Even as a fan, the mountain of things to deal with was a little overwhelming before I got the hang of it. While there is something to be said for a game knowing who it is for and focusing on them rather than trying to please everyone and potentially harming the experience, the fact remains that OOTP is appealing to only a tiny subset of players.

OOTP 13 does exactly what it sets out to do—it provides the hardcore fan with the most detailed front office sim experience possible. Once I got into the ebb and flow of managing my team, it was sheer baseball nerd nirvana, and there's a lot of value in that. Rating: 7.5 out of 10.


Disclosures: This game was obtained via publisher and reviewed on the PC. Approximately 12 hours of play was devoted to single-player modes and no time was spent in multiplayer modes.

Parents: At the time of this writing, this game has not been rated by the ESRB. However, OOTP 11 received an E rating, and I saw nothing even slightly objectionable in this game.

Deaf & Hard of Hearing: There are no spoken lines or audio cues. The entire game is text/graphical interface-based, so you'll be fine.

I had intended to reply here with my own experience – basically that I was as casual a baseball fan as you could meet, with the sum total of my baseball interest being to check the standings every six weeks or so to see what is going on. This should ‘prove’ that this game is accessible to the casual fan as well. However yesterday things took a turn for the worse, when I bought a subscription to MLB.TV and got it streaming through the PS3. I spent my Saturday night watching the Giants Vs Phillies, and this morning I looked… Read more »

There are some really good tutorials out there, and there is a ton of depth to it. However, even after I got the hang of things the UI was still a hindrance.

Like I said at the end, the game knowing who it’s for isn’t a bad thing, but I just don’t see people outside that relatively small intended audience getting much out of it.

Great to see this game getting reviewed on GameCritics. However, I think you’ve slightly misjudged it when you say it’ll appeal only to the hardcore. I still don’t understand the difference between hit-and-run and run-and-hit, and BABIP (for example) is still a mystery even having looked it up, but I would say that lots of people will enjoy this game without knowing any of that baseball arcana. The beauty of the game is that you can easily customise it to the level at which you can have fun. For example you can go through the season and manage each game,… Read more »