I apologize in advance for any biology-related discrepancies 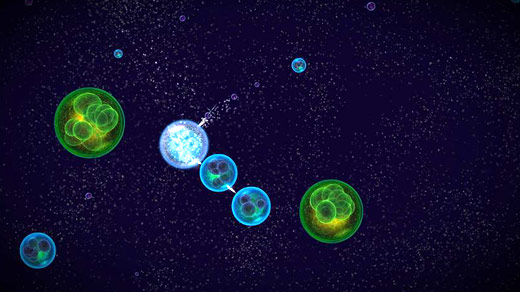 HIGH Absorbing a big lifeform just slightly smaller than me.

LOW Miscalculating my orbit in the sun levels and dying when I was close to finishing a level.

WTF Shouldn't my lifeform become intelligent at some point after consuming so many others?

Osmos is a game that very much resembles a lot of other games (Asteroids and Katamari Damacy to name a few) but does enough on its own to be considered unique. The premise is simple—the player is cast as a single-cell organism and must become the biggest fish in the primordial pond by consuming as many life forms as possible. There's nothing really new or exciting here, but Osmos can provide a very soothing experience after a day's work with its relaxing sound, visuals, and low learning curve. And while the reprieve is appreciated, is a game in which I've seen almost every  gameplay mechanic before worth a full price purchase?

The spacelike ambience surrounding the game is by far its most appealing aspect. The amoebas float about in a simplistic but charming liquid environment that could also pass for a group of planets and asteroids in space. The techno/electronica soundtrack is fantastic, lending itself well to the idea of a bunch of single-cell organisms creating new lifeforms. The free feeling that the game conveys is what really makes it stand out from the similar titles, as what could have been a stress-filled attempt at the high score or level completion becomes a relaxing drift through the process of single-cell evolution.

Gameplay is entirely physics based, as the only way to move is to expel a little bit of mass in order to gain propulsion. Placing the mouse cursor in the appropriate place and left-clicking is the only interaction the player makes with the game outside of the menus, making for a very minimalist interface that serves the game well. The dynamic that this scheme presents became apparent right away, since I always had to choose between going after the organism I wanted to consume or letting it go by and conserving my mass. Any organism smaller than me can be consumed, adding to the little mote's total mass, while I was lunch to anything bigger than I was. There were several instances where I was in hot pursuit of another organism, only to use just a bit too much mass to get myself there and then being consumed by my supposed prey.

As the game progressed I was introduced to several new game types and obstacles, giving the game some fangs to go along with its chilled out atmosphere. I eventually came upon more intelligent organisms that would actively pursue and consume the normal motes and attempt to avoid me if I came after them, forcing me to strategize around how to corner them. Another scenario had me being placed in orbit of a "sun" object with a constant force pushing me around, making me keep my eye on the other motes that I had to consume and also on the orbit path to make sure I didn't float right into the center.  In short, Osmos manages to provide a great challenge while at the same time keeping everything easygoing and smooth.

It's tempting to write off Osmos as a "been there, done that" experience. While all of the mechanics in play here certainly aren't new, the team at Hemisphere Games does a wonderful job of wrapping them up in a cool, calm, and collected package that makes it feel new and refreshing. Rating: 7.5 out of 10.

Disclosures: This game was obtained via Steam download and reviewed on the PC. Approximately 2 hours of play was devoted to single-player modes. There are no multiplayer modes.

Parents: At the time of this writing this game has not been rated by the ESRB. I would have no problems allowing young children to play this.

Deaf & Hard of Hearing: All game instructions are printed text on the screen, and there are no significant audio cues.