Intruder is a Class A ninja! 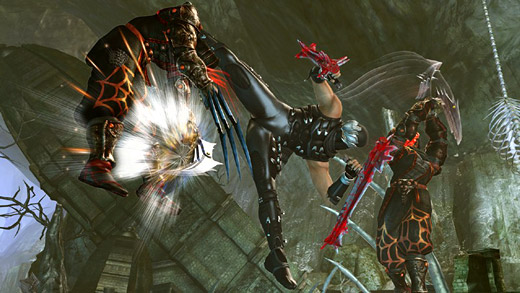 HIGH Pulling off the dual-sword finishing combo that turns your opponent into the second-best thing since sliced bread.

WTF Big-boobed sidekick gets her own helicopter and a bazooka, while I get little throwing stars and arrows.

Ninja Gaiden II, like its predecessor, is the kind of game that I am usually ready to write off as stupid and immature after about an hour of play time. Honestly, how else can one describe a game that features numerous patches of excessive frustration, a bunch of half-assed "get the key" quests, female characters with breasts as large as their freaking heads, and a horrendous story? However, whenever I play something like Ninja Gaiden II or its blood-splattered, equally ridiculous ilk, something strange happens just as I'm ready to place it in the "meh" category—I start having fun.

The premise behind Ninja Gaiden II is simple, as it was in the first title. The player is a ninja named Ryu. Within the player's plane of existence there are other ninjas and some demons along with other assorted snarling assholes that apparently don't like ninjas all that much. As a ninja, it is the player's job to eviscerate all of them. Got that? Good, because that's really all there is to it. Sure there's a bunch of nonsense about the resurrection of some snarling asshole that is bigger and badder than all the other snarling assholes in the game, but everything is so contrived and ludicrous that it isn't worth trying to follow.

The narratives of both the recent Ninja Gaiden games aren't bad—they are pure drivel. I know for a fact that there are lots of independent writers out there who could come up with a story that would be infinitely better than what Team Ninja slapped on this game, and they could probably be had for a reasonable price. Granted, I understand that a game about a ninja slicing everyone he finds into thousands of tiny pieces isn't exactly a venue for storytelling excellence. But this game obviously had a significant budget, so would it really have killed them to hire a writer to make something that would at least be decent enough not to make me cringe when someone talks?

Also, let me say first that I very much enjoy females and their breasts. I am a fan, one might say. However, I can't stand the juvenile portrayal of Sonia, the jiggly, apparel-challenged CIA operative whose apparent mission is to find random ninjas and tag along on their adventures, similar to the ridiculous character of Rachel in the original Ninja Gaiden. This sort of thing makes me embarrassed to be playing the game, and ironically this is what pushes a title towards a "Mature" ESRB rating when in fact it fits the very definition of immaturity. It isn't cool, and it isn't sexy. It's just stupid. 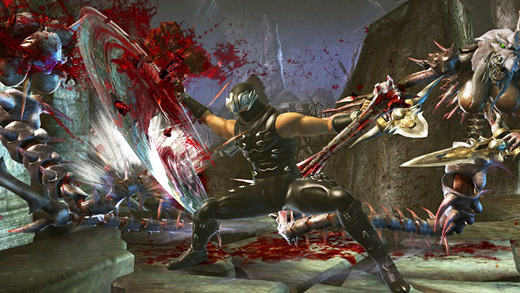 My ranting aside, Ninja Gaiden II effectively preserves the one thing that made the original fun to play—brutal, gory action. Ryu slices his way through horde after horde of opponents, leaving a trail of blood and dismembered bodies behind him. The controls are identical to the first game for the most part, making the use of combos and finishing moves very intuitive and easy to learn. From the very beginning I was executing massively over-the-top attacks with relative ease and sending limbs all directions, the height of ninja awesomeness. The additional weapons I came across weren't completely useless as they were in the original, but I still found myself switching back to the normal sword for the majority of the game. Jumping and wall-running is still a bit of a pain, as a forward jump will always take players a set distance forward even if they're standing still, making precision jumping harder than it should be. Wall-running has a similar problem, as the slightest miscalculation in where to start the run caused me to fall short of my destination. There are however fewer instances that require precision acrobatics, making the problem a little less evident.

While at its heart there hasn't been a whole lot of change, Ninja Gaiden II has actually made a number of small but worthwhile improvements over its predecessor in terms of gameplay. A weapon/item selector that is accessed through the D-pad takes away the tediousness of having to change items by pausing the game and using the menu. The use of arrows is much better, as they can be charged like a normal sword attack rather than in the original where I would always be at full capacity for the useless arrow types, but be out of the good ones.

While there is still no in-game map, enemies will no longer respawn if I run back forth through an area more than once, which is a very welcome change since the lack of a map makes it very easy to get lost or turned around. Also making a return are the bothersome little fetch-quests, which consist of finding a locked door, then finding a key ten feet away in a chest out in the open. This only serves to take time away from hacking and slashing, and none of these incidents are even remotely challenging in any way. I'm confused as to what purpose the key quests are meant to serve in a game whose appeal lies entirely in constant action, and I was disappointed that the game decided to keep trying to masquerade as something it's not.

Ninja Gaiden II is as challenging as the first game if not more so, even on normal difficulty. As a result frustration and a lot of cursing abounded throughout the game. As taxing as it was however, ultimately the challenge proved (again, as it did in the original) to be very refreshing in a way. The feeling of satisfaction after pulling off a massive combo and sending body parts flying in all directions or defeating a particularly challenging boss was very real. Make no mistake—this game will constantly be throwing enormously cheap opponents your way and push your ragequit urge to its limit. And when I made it through (granted, with a ragequit here and there), the feeling of accomplishment was all the better for it.

Ultimately Ninja Gaiden II retains everything from the original, for better or for worse, and makes a few small but very noticeable improvements. It's immature, it's nonsensical, and its image of women is apparently that of a 14-year-old boy who has seen Heavy Metal a few too many times, but underneath all that is a very polished action game that delivers what one would expect from the genre. Rating: 6.0 out of 10.

Disclosures: This game was obtained via rental and reviewed on the Xbox 360. Approximately 12 hours of play was devoted to single-player modes (completed 1 time). There are no multiplayer modes.

Parents: According to the ESRB, this game contains blood, gore, and violence and has received a Mature (17+) rating. Simply put, this isn't for kids and they shouldn't be playing it for all the reasons listed above.

Deaf & Hard of Hearing: All spoken lines can be subtitled (not that it helps to understand what's going on) and gameplay is not dependent on audio cues in any significant way.

Im grateful anytime someone plays a Ninja Gaiden sequel so that I don’t have to.

I would like to add that your view on the weapons is very shallow. Not that you commented too much about them, but their usefulness (and the fun of mastering them) is evident in the higher difficulties and therefore your view on the whole game isn’t really complete. This is one of those games that can’t be fairly judged with 12 hours of play time as it depends a lot on the player trying to take on the harder modes. And if possible, beating them.

[quote=Omer Altay]Just one little typo you made in the ‘WTF’ section at the top. You spelled ‘Throwing Stars’ as ‘throwing starts’.[/quote]We’ve corrected that little error. Thanks for pointing it out.

Just one little typo you made in the ‘WTF’ section at the top. You spelled ‘Throwing Stars’ as ‘throwing starts’. I hate when games put in mindless fetch quests to fill time.

An accurate review and score, and one not many people get the opportunity to relay in the sea of mediocrity that is modern gaming/gaming journalism (aside from this site, obviously). So kudos for playing and reviewing the game properly.