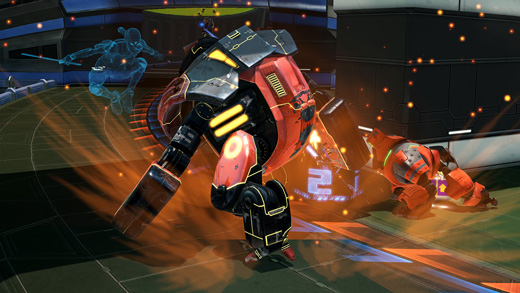 HIGH: Hacking an enemy turret and watching it wreak havoc.

LOW: Hearing the same announcer line for the third time in two hours.

Multiplayer is a difficult thing to do right. Creating a worthwhile experience for the player is tricky when faced with the most unpredictable, adaptive "AI" in existence: other human players. Nobody quite knows what's going to happen until real live humans start hitting the maps, which is why multiplayer can fall flat so easily. A good multiplayer romp often requires a sense of controlled chaos; a feeling of everything around you being out of control while being in total control of yourself.

While it might not have all the trimmings of a bigger game, Monday Night Combat, a class based third-person download-only shooter from fledgling developer Uber Entertainment, manages to capture this concept and all the oxymoronic goodness that comes with it.

The game is simple: teams must escort a group of robots to the opposing team's moneyball and destroy it. This constitutes the game's Crossfire mode. There are other single-team and single-player modes available, but they aren't all that relevant when compared to actually going up against other players.

The dynamics of the different classes and strategies in Crossfire can be pretty deep, resulting in a rewarding experience. The game is quite well balanced, as none of the classes seem seriously overpowered in any way. While I'm not sure that they all need grapple moves, the weapons are well-suited towards the intended strengths and weaknesses of each class. However, this has already been done by many other games, so how is Monday Night Combat anything more than a Team Fortress 2 clone?

Comparing the two, there are indeed quite a few similarities—most noticeably with the class breakdown. Each class has a distinct parallel to a class or combination of classes in Team Fortress 2. Gunner = Heavy, Tank = Pyro, Support = Engineer + Medic, Assault = Soldier + Demo, Assassin = Scout + Spy, and Sniper =….well, Sniper. However, these similarities are positive ones. 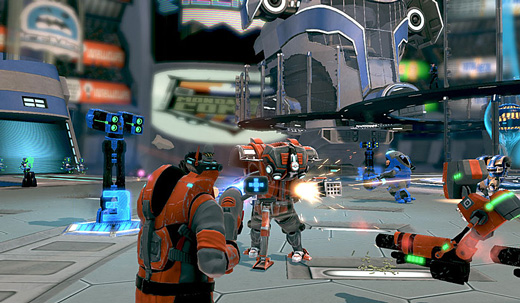 The role distribution works well, and playing one class in the same method as another is a recipe for getting an Assassin's blade stuck in your back. Borrowing mechanics from other games is perfectly fine as long as the game in question is able to present itself as something fresh, and Monday Night Combat is able to do that by incorporating elements from another, more unexpected title: Ratchet & Clank.

During actual gameplay, I got a very distinct Ratchet & Clank vibe, specifically in regard to the multiplayer component from the third game in the series, Up Your Arsenal. The multiplayer for that game was surprisingly well done, especially considering how many titles simply tack on multiplayer for the sake of having it. (See: Metroid Prime 2.) I was always hoping for a multiplayer-centric title to grace the Ratchet & Clank franchise, and Monday Night Combat, intentionally or not, seems to have captured that spirit. The cartoony weapon sets, abilities, and third-person perspective make things feel very similar to Insomiac's series, and the game is better off for it.

Looking specifically at Monday Night Combat's themes and designs, the cheesy sports motif feels fresh at first, but started to grate on me after a while. The announcer doesn't have very many lines, and I think I heard them all by my second or third game.

The personas of the different classes are kind of flat too. There are a few gems like the Support (who looks like Mario after aging 30 years) and the acrobatically silent Assassin, but the others feel a bit dull. The Tank and the Gunner are essentially the same personality-wise, and the Sniper's one-liners are mostly misses. This is obviously a very superficial complaint since it doesn't detract from the gameplay at all, but a little more character from the characters and more variety in the setting would have helped make the game world a bit more endearing.

Similarly, Monday Night Combat's larger problems don't lie in its core gameplay, but in its relatively shallow amount of content. For example, the maps suffer from a severe lack of variety, as they're all pretty much the same with maybe a few structural or minor cosmetic differences. A few different environments other than the default stadium would have been nice. Furthermore, as good as Crossfire mode is, it does get old after a while. Some different types of modes would have been very welcome. In particular, one idea I'd like to see would be a mode where each team had to protect one giant robot—but that's just coming from me.

Monday Night Combat may not come with as many of the bells and whistles of a bigger game, but the sweet, bacon-filled core is tasty enough on its own—even if it is a bit lean. Uber has turned in something good for its first offering, and hopefully it has something great tucked away up its sleeve. Rating: 7.5 out of 10.

Disclosures: This game was obtained via publisher and reviewed on the Xbox 360. Approximately 5 hours of play was spent in multiplayer modes and almost no time was spent in single-player modes.

Parents: According to the ESRB, this game contains violence and crude humor. I wouldn't consider anything in the game proper to be unsuitable for an teenager, but like any other online game things can get nasty over the internet. Parents will want to keep an eye on their children while they play this just to make sure they don't start acting like one of those kids.

Deaf & Hard of Hearing: You should be fine. Spoken lines aren't important and there are enough visual cues to make up for the lack of sound.