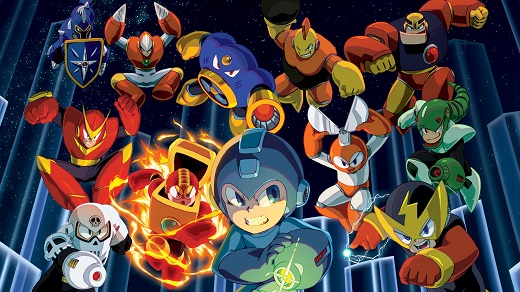 HIGH Another chance to experience the underrated Mega Man 4 and 6.

LOW The omission of the underrated Mega Man 7.

WTF How are there fewer games than in the Mega Man Anniversary Collection?

Recent history has not been kind to Mega Man.

Since the release of the fabulous Mega Man 9 and 10, Capcom has shown little interest in continuing the Blue Bomber's adventures. Instead they've been promoting merchandise, fan-made games, and now the Mega Man Legacy Collection—the most recent re-release of Mega Man's NES adventures.

This is normally where I would introduce the game and give a brief explanation of what it is, but Mega Man needs no introduction. The platformer genre itself would not be what it is today without him, and his influence can be felt in countless other games, and even across genres.

As for Legacy itself, it's mostly well and good.

The classics here are still classic, right down to the screen flickers and glitches found on the original NES cartridges. Mega Man 1, 2, 3, 4, 5 and 6 are presented virtually unchanged from the originals. While this might please purists, the lack of things like quick weapon switching via the L/R buttons is a bit irksome.

Younger players now have a chance to experience some of the underrated gems from the series' later run, like 4 and 6. This may not sound like a big deal, but in a world where the number of working cartridges is forever shrinking, another preservation effort like this is always welcome.

All the assorted bells and whistles one would associate with such a collection are here too, like art galleries, soundtracks, and special challenge modes. The only real sin the Mega Man Legacy Collection commits is the omission of anything past Mega Man 6, such as the excellent Mega Man 7.

Despite enjoying this collection for the most part, I still felt a sense of emptiness in my time with Legacy. It feels like Capcom didn't go far enough with the package, especially after the release of the Mega Man Anniversary Collection just a decade ago. That disc managed to include Mega Man 7 and 8, so why are they missing here?

Given the Mega Man's recent treatment, I can't help but be a little disappointed to see another incomplete collection, this time omitting almost half the series. Three of the final four entries are more than worthy of being included in any kind of Mega Man archive, and we might as well throw the putrid Mega Man 8 in there. I realize that the NES era was the focus of this particular collection, but leaving out some of the series's best entries is a glaring mistake. I will always love the games gathered here, but I can't help but feel a little shortchanged. Rating: 6.0 out of 10


Disclosures: This game was obtained via publisher and reviewed on the 3DS. Approximately 3 hours of play was devoted to single-player modes. There are no multiplayer modes.

Parents: According to the ESRB, this game contains mild cartoon violence. While some of the earlier games might be pretty frustrating for younger children, there's nothing at all objectionable from a content standpoint.

Deaf & Hard of Hearing: There are no spoken lines and all relevant information is displayed on screen.

Remappable Controls: Thankfully the buttons are fully customizable via the options menu. It even has an option for Mega Man 1's weird alternate pause button.