8-bit is Still Back 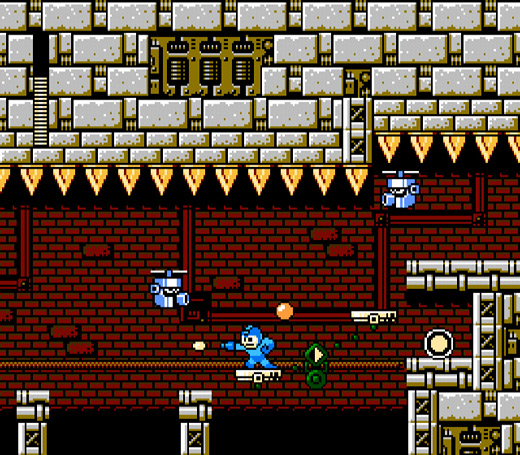 LOW: The weapon I got from Sheep Man.

WTF: Can Wily come up with a final form that isn't a disappearing ship?

Coming off the retrofied success of Mega Man 9, Capcom and developer Init Creates are once again going back to a familiar formula; find something that works, then start cranking out sequels. Capcom's 2D platforming trailblazer has been no exception to this rule. Mega Man 10, like its predecessors were all those years ago, is the same as the previous installment with a few minor differences.

The biggest change that Mega Man 10 brings to the table is the addition of a new easy mode for less masochistic gamers. This mode isn't simply a alteration to enemy health or quantity—the layouts of whole levels are changed, such as spike traps being removed in favor of easy to cross bridges. I certainly don't begrudge people who pick this mode, as the entire Mega Man franchise is the very embodiment of OH FOR PETE'S SAKE. Still, tempted as I was to save myself the grief of countless deaths right before a checkpoint, I couldn't do it. It just doesn't feel like Mega Man if my blood isn't boiling by halfway through the second or third stage.

Rest assured, all the franchise hallmarks are here. The levels are as creative as ever, and the expanded use of minibosses adds to the already mountainous challenge. The 8-bit musical stylings of ages past are back and still get stuck in my head like they did fifteen years ago. The game very much looks and plays like any other 8-bit Mega Man title, but it also manages to void Mega Man 9's signature achievement in my eyes.

One of the greatest flaws of the Mega Man series has always been the special weapons earned from the bosses. In every game there's always one or two weapons that are super-powerful (Centaur Flash, Metal Blades, Dive Missle, Rain Flush, etc.) and the rest are just plain worthless (Bubble Lead, Dust Crusher, Wind Storm, etc.). Mega Man 9 was different in that I kept finding myself using all of the weapons throughout normal gameplay for one reason or another. They all had some kind of purpose whether it be in combat or some other use. Mega Man 10 unfortunately falls back into the rut, and is actually worse in some ways. There were only two weapons I used with any regularity outside of bosses, and even against bosses many of the weapons are so unwieldy that it was actually easier for me to beat them with the normal shot instead.

Speaking of the bosses, it's pretty clear at this point that Capcom has had to reach a little to find ideas for robot masters. And you know what? I think it's great. Sheep Man? Fantastic! Pump Man? Suggestive and superb! Strike Man? Seriously, why hasn't anyone else thought of an evil, robotic baseball before? In future installments I hope that the developers' creative freedom is expanded so we see things like more female bosses and more bizarre designs, like say Yarn Man, Ketchup Woman, Camera Man and the like. I mean, we all know that the standard fire/ice/lightning/earth/etc. tropes have been redone a gazillion times already, so why not go all-out? What is there to lose?

The same thing can be said about Mega Man 10 that was said about Mega Man 6, 5, and 4. It's Mega Man, and there's nothing wrong with that. I'll keep playing them as long as they keep making them, but that doesn't mean that this new iteration isn't vulnerable to the same stagnation that the original series was. The weapon design drop-off was very concerning, and if it isn't addressed I fear that this series may not make it to Mega Man 14. Rating: 6.5 out of 10.

Disclosures: This game was obtained via retail download and reviewed on the PS3. Approximately 4 hours of play was spent completing the game once on normal difficulty.

Parents: According to the ESRB, this game contains mild cartoon violence. Nothing to worry about here, although the kids may throw a bit of a tantrum after a sudden spiky death.

Deaf & Hard of Hearing: There are no spoken lines and no significant audio cues.