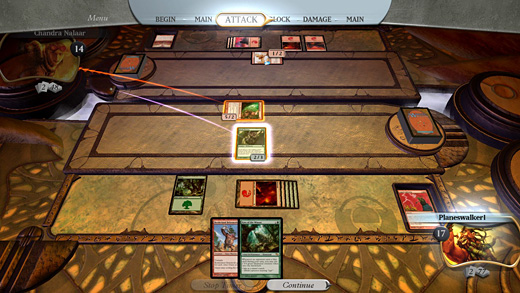 HIGH: Getting a good card that I know is going to wreak havoc on the next turn.

LOW: Having that card taken away by an opponent's insta-removal card.

I have never played Magic: The Gathering. Not because I didn't want to, but it just never came up. Some of my teenage acquaintances played it, but they were all douchebags. In my college years I was simply too busy with class and lovemaking. Now that I'm in my late twenties I thought I'd never get a chance to get into Magic, that mysterious game of mystery. Then along comes Duels of the Planeswalkers, a video game adaptation of the card game. My interest was piqued. Piqued like a Spined Wurm arching back and going for the kill.

Planeswalkers does a great job of initiating the uninitiated into a very complex card game. The tutorial game is thorough and explains the rules and structure of the game very well, including turns, combat phases, and the propensity of some cards to completely shatter the rules. I was into my first game and understanding everything within about twenty-five minutes. The gameplay (much like the real game I imagine) is extremely engaging, with lots of depth and strategy going into each turn. Originally introduced in 1993, it's easy to see why Magic has maintained a following for so long. The easy to learn yet tough to master playstyle is simply brilliant.

The advent of online play is a blessing for a game such as Planeswalkers, since my old problem of finding non-jerk friends to play with is no longer relevant. Of course, playing a real game is far different than playing the computer, and I was promptly spanked by our resident podcast master, Tim Spaeth. But even in losing to Tim's blue deck of death, the appeal that online play holds for a game such as Magic is undeniable. If there was ever an old-school card game that could benefit from the rise of the internet, it's this.

Of course, there is also the question of how well Planeswalkers recreates the actual feel of the card game. This of course is a question I cannot answer, but according to friends who are well-versed in the original game there is a visible lack of customization options over your deck. While this is a good thing for new players (like myself) so they don't get overwhelmed by the massive amount of cards and options available, it does leave veterans with a sense of confinement. Still, both of the people I spoke with said that the game is certainly worthwhile, especially due to its use of online play.

Duels of the Planeswalkers is a faithful, if watered down, representation of a classic game that excels at drawing in new players and reigniting the old fire in seasoned veterans. And I got into it without having to deal with those assholes from high school. Rating: 8.0 out of 10.

Disclosures: This game was obtained via publisher and reviewed on the PC. Approximately 1 and a half hours of play was devoted to single-player modes and 30 minutes of play in multiplayer modes.

Parents: According to the ESRB, this game contains: mild blood, mild suggestive themes, violent references. While smaller children might be put off by the complexity of the rules, content-wise there's nothing here I would worry about for any age.

Deaf & Hard of Hearing: There are no spoken lines and no auditory cues.

This game Started out to had to opportunity to be good, but after countless “new” game releases (with a hell of alot of deck bundles and and DLC´s there arent worth mentioning, since its almost the same as the game itself), this game has found no new way to do ANYTHING. Every other game has loading screen as long as fallouts worst, on top of that, you will often run into it not randomizing cards, so if you play on hard difficulty, you will spend most time refreshing games, and seeing the loading screen.. They have made alot of different… Read more »

DotP is one of the few games for which I’ve double-dipped (XBLA and Steam) and I’ve put about 10 hours into each version. I think it could stand to take a cue from Culdcept and offer a reward for losing a match. Maybe unlock 1 card for a loss, and two cards for a win? It would help soothe the “crap I just wasted 20 minutes” feeling just after a tough defeat. [quote=mythofheaven]Hmm. I was just wondering if video games based on card games could become a big thing. With DLC, it seems reasonable that a whole new game could… Read more »

Warhammer/figure games have always been appealing to me, but as you said I’ve never had the motivation to actually build/paint my pieces. A pre-made miniatures game would be up my alley though.

Had a very close childhood friend who loved warhammer, and tried to explain/play with me…i really liked it (didn’t understand it at that age) but couldn’t get into the idea of actually painting my own figures, and using rulers and crafting my own terrain, etc. He was really nice though; your warhammer story sounds like my magic experience at the local store. Not sure that that experience could ever entice you to look at “figure” boardgames (not sure how to label this genre) again, but heroscape is a lot of fun. The figures are already created/painted, each with a hero… Read more »

You’re right-I had no idea that Magic online existed. Even still, I appreciate the hand-holding of Planeswalkers and the fact that I can try and fail against the CPU.

I remember once an old friend of mine tried to teach me Warhammer. After starting the game he began laughing maniacally about how I couldn’t win and that I was doomed. I still have no idea how I was supposed to win that game 😛

Hmm. I was just wondering if video games based on card games could become a big thing. With DLC, it seems reasonable that a whole new game could be made and played solely off disc with new cards being introduced via DLC in a randomized manner for cheap, trading with friends, and tournaments. Even the resurrection of dead card games like Doomtown seems possible. I don’t know enough about the inner workings of card game communities to know if this would work, but a thought it is (you wouldn’t have to screw up the face of the cards with your… Read more »

Agree on all counts. Except for the part where you mention that if there was any way for this game to get more popular, then the advent of it on the internet is the way to go. Although you are clearly right, you may not know that it has been available on the internet now for years, and indeed is hugely popular. Hugely should be in quotation marks, but there is a substantially large pro circuit and pretty decent money involved. While I consider myself pretty seasoned in playing, it was very easy for me to appreciate the simplicity of… Read more »