You Won't Even Notice that All the Humans are Gone 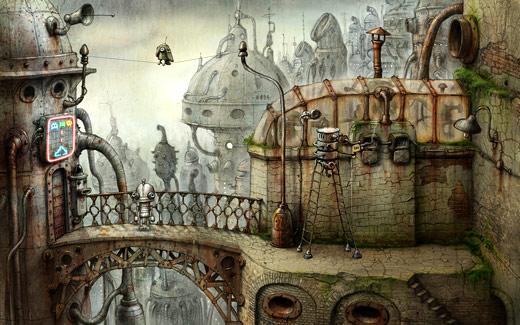 HIGH: Overlooking the city from the game's high points.

WTF: The oddly convenient series of pipes in one of the puzzles.

It's easy to think that adventure games are a stagnant lot. The formula really hasn't changed all that much in about ten years, so any new adventure game's mission consists mostly of two things. One is to make the puzzles and other obstacles interesting and challenging enough to make the player feel like he is actually progressing through the game rather than just tagging along for the ride. The other is to wrap a familiar set of gameplay mechanics in a good package of style and substance to make the experience feel fresh. Machinarium, the recent Flash-based adventure hit from Amanita Design, does both of these things and does them extremely well.

Saying that Machinarium looks good simply does not do it justice—this game is jaw-droppingly beautiful. The open areas that overlook the rest of the world are absolutely breathtaking, and at the beginning of the game the scenery looked so good that I thought I was playing some sort of introductory cinematic and the in-game graphics would be coming soon. Every single area, even the small enclosed ones, are so painstakingly detailed and stylistic that it really fells similar to playing an episode of Aaahh!!! Real Monsters. In fact, sometimes the game looks so good it can be difficult to see items that can be picked up or used in some way. I honestly can't put into words how well-done the visuals are in Machinarium—it's probably better expressed through a quick Google image search.

Machinarium casts the player as a simple little automaton known only as "The Robot" who must find his way back into the city after being taken out with the garbage. The game's backstory is told largely through a series of animated dialog bubbles that were always a treat to watch, as the hand-drawn sketch style used in them really lends itself well to the overall theme. Similar to the storytelling in Wall-E, the narrative is expressed mostly through gesture and a few emotionally charged spurts of sounds from the characters, and the result is something endlessly charming and always heartwarming. The music is also fantastic, creating a sometimes playful, sometimes sad, and always engaging feeling throughout the game. With its stunning aesthetics, Machinarium immerses the player into its world entirely, with all the wonderful quirks that go along with it.

Machinarium is a point-and-click adventure game executed to near perfection. The player must find and use items within the game world to solve puzzles and access more areas. The only interaction with the game world is clicking on things and using items on things by clicking on them, so the controls are pretty simple. This is where I make the only negative comment I have about that game, in that I wish that after taking an item out of my inventory I could right-click and send it back rather than having to drag it back up there (a la The Longest Journey), but even this doesn't come close to dampening the experience. The puzzles are challenging, extremely challenging in some cases, and the feeling after finding a solution was always rewarding. It was very, very satisfying to see such a gorgeous game (similar to what Aquaria did) not be afraid to show some bite to go along with the bark.

Make absolutely no mistake about it—Machinarium is a difficult game. Some of the brain teasers took me a long time to figure out, and the game is not afraid of throwing something out there that looks insanely difficult at first glance. That said, the player is also given a quick and easy way to find solutions if he so desires. Hints are given in two forms. One is in a small dialog bubble in the main menu which gives the player a hint as to what the end goal is in a specific area. The objective for a particular area isn't always obvious, so these can kindly give the player a little nudge in the right direction without feeling too cheap.

The other method is much more drastic. At any time the player can choose to play a little side-scrolling shooter minigame, and upon completion he is given the solution to the entire area. This might seem a little disconcerting at first, but in the end it really didn't bother me. A similar topic was also brought up in a recent podcast, and ultimately I felt that this was a perfectly fine way to walk the line between being too hard and being too easy, since any player who didn't want to use the guide could choose not to. I will admit, however, that I did wind up using it a few times. Four to be precise.

With a brilliant musical score, gorgeous artwork, solid adventuring mechanics, and a ton of other generic positive reviewer comments I can heap on it, Machinarium is elevated from merely good to gaming greatness, and I can only hope that the minds at Amanita produce some more masterpieces like this one. Rating: 9.0 out of 10.

Disclosures: This game was obtained by download through Steam. Approximately 10 hours were spent completing the game once. There are no multiplayer modes.

Parents: This game has not been rated by the ESRB at the time of this writing. This is a great game for kids, as there is no real questionable content and there are lots of good brain-teasers. There is one instance of innuendo, but it's probably more my filthy mind than anything else.

Deaf & Hard of Hearing: Unfortunately, colorblind players will likely have a lot of problems with this game. Many of the puzzles are color-based and there is no colorblind mode to assist them. The situation is mitigated by the guide system, but it still leaves puzzles that probably can't be solved. There is also a puzzle near the end that requires the player to play a song by hear, which would obviously be a problem for deaf players.

Hello, those of you who enjoyed Machinarium soundtrack might be interested in hearing that Machinarium 14 song soundtrack will be released in February by Minority Records (www.minorityrecords.com) in an edition of 555 hand-numbered LPs, 405 copies on black and 150 on clear yellow copies. Minor changes have been made in the track list: in comparsion to the official OST, there is new song “By the Wall” included, and the samba song (Prague radio) was left out. Each copy is signed by the author himself and contains three art reproductions by Adolf Lachman and coupon with a code to download both… Read more »

[quote=Matti]Every time I play the robot in the bar, he shakes and a bunch of screws fall out. They fly everywhere, but they never seem to stay anywhere. I can’t find them, and I cant pick them up because they’re no where. Any idea what might be wrong?[/quote]

Once you beat him once and collect the “screws”, there is no need to get more. You just have to figure out what to do with those that you already got.

I don’t recall the solution to that part exactly, but I think you can get them. If you’re really stuck try using the guidebook in the upper right corner.

Every time I play the robot in the bar, he shakes and a bunch of screws fall out. They fly everywhere, but they never seem to stay anywhere. I can’t find them, and I cant pick them up because they’re no where. Any idea what might be wrong?

Also, just as a heads up, I’ve contacted Amanita Design about a possible interview. If anyone has any questions they’d like me to ask them, post them here.[/quote]

1. What king of future do they see for point n click adventure games?
2. What’s behind their decision for telling stories in their games without using actual dialog.

[quote=Anony Mouse]. . . that the guy who made MACHINARIUM also made the similar and immensely popular SAMOROST games (there are two of them). So if you like more of this style of game, there is more fun to be had. :-)[/quote]

Yeah, and i think the first Samorost is free.

. . . that the guy who made MACHINARIUM also made the similar and immensely popular SAMOROST games (there are two of them). So if you like more of this style of game, there is more fun to be had. 🙂

Thanks for the positive feedback guys-it is appreciated.

Also, just as a heads up, I’ve contacted Amanita Design about a possible interview. If anyone has any questions they’d like me to ask them, post them here.

I haven’t heard of this game prior to reading the review. Shame on me, considering that I’m a bit of a p&c junky. Will rectify this problem soon.

The art style from the screenshot sure looks gorgeous, but had you not mentioned that it’s a p&c game I would’ve thought it’s an indie platformer.

This is my favorite release of the year, closely followed by Demon’s Souls. Anyone who admires illustration, animation, sound design and music will simply adore it. When so many artistic aspects come together to form such a coherent and convincing work, it’s impossible not to fall in love with it. It’s the sort of game that, by its sheer imagination and craft, manages to deeply move you. And if you’re into Warp Records, you’ll be playing the soundtrack constantly on your mp3 player.

Finally! Machinarium getting the praise it deserves. This game is simply brilliant. Reminded me of why i used to play and love point and click adventure games so much. Like you mention in your review “Machinarium is a point-and-click adventure game executed to near perfection”. Completely agree with you. With the exception of a couple of puzzles this was indeed a perfect game. Superb soundtrack (which you get for free if you buy the game from the official site) and gorgeous art. The real story is being told basically backwards as you slowly begin to unravel how everything started. In… Read more »