"Gettin' good players is easy. Gettin' 'em to play together is the hard part." -Casey Stengel 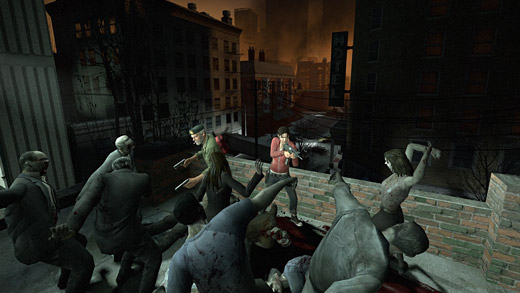 HIGH The frenzy of a tank battle.

LOW When my teammates quit in the middle of a match and I'm forced to deal with the CPU players.

WTF Since when is it healthy to chug an entire bottle of pills?

Team-based multiplayer gaming is a difficult beast to tame. The game must reward individual skill while simultaneously encouraging teamwork, and players who don't work well with others must be made to fail, at least to some degree. With Left 4 Dead, Valve has created an experience that forces players to rely on their team even more so than their other recent offering of multiplayer goodness, Team Fortress 2. The result is immensely gratifying….if you've got the right people to play with.

Left 4 Dead's concept is simple; there are four humans who must make it through the level without being killed by the hordes of zombies that stand between them and freedom. The survivors must move quickly and watch each others' backs in order to make it out alive. If one player gets knocked down, he/she needs a teammate's help to get back up. In addition to the normal stock zombies (similar to the 28 Days Later variety for you zombie enthusiasts), there are special zombies that are capable of killing a player outright…if they can catch one separated from the others. Staying together is vital for the survivors, as one player that runs off on their own can ruin things for everyone. Dysfunctional teams are an especially annoying problem when playing random matches, since they are often full of (insert your own preferred slang for incompetent/inexperienced players here).

It was abundantly clear from my first playthrough that there have to be four players (eight if you're playing versus) to experience Left 4 Dead at its fullest, as having to babysit the CPU player(s) is an exercise in frustration to say the least.  The NPCs never seem to understand the need to help me up when I was knocked down and they also have a nasty tendency to stay behind until the entire group has moved forward, making them prime targets for the boss zombies. Having a full team of human players is crucial to smooth and balanced gameplay. However, once the player slots fill up, things come together extremely well.

The notion of teamwork is absolutely essential and is what sets Left 4 Dead apart from other multiplayer first-person shooters—the player's teammates aren't just along for the ride, they are the ride. Players must move as one and watch out for each other at all times. This interdependence is the game's most distinguishing feature, and a player's opinion will be defined by how willing he is to place his virtual well-being in the hands of his teammates. Indeed, Left 4 Dead demonstrates a better fundamental understanding of co-op play than every other title I've seen that promotes itself as a co-op game. In many similar games the co-op mode essentially amounts to the player and a friend or two running through a level together, not having to depend on each other all that much.  Often times there is even competition among teammates as to who gets the most kills or who can move the fastest, rather than the focus being on completing the game—this is not so in Left 4 Dead. While individual stats and numbers are calculated, they are far overshadowed by the main objective of getting to that safe room before everyone becomes zombie dessert. The sense of "we have to keep moving or they'll get us" grabbed me from the beginning and never let go. 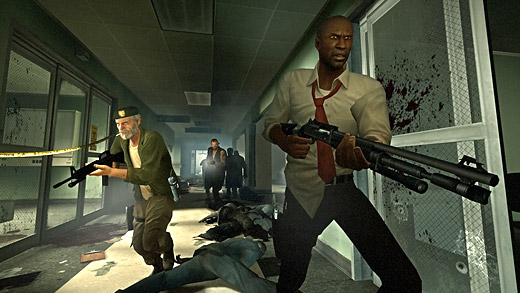 There are two game modes—campaign and versus. In campaign mode four humans are pitted against the CPU controlled zombie horde. This is fun enough by itself, but it isn't much of a challenge unless you're playing on expert difficulty. The AI director feature mixes things up to somewhat by randomizing instances like horde spawns, special zombie locations and weapon availability. The director also tailors the music and audio cues that each player hears to what they are experiencing at any given time, making some nice additions to moments of tension and relief such as an impending horde attack or the moments after said horde has been defeated.  However, even the director can't alleviate a general sense of stagnation after playing campaign mode several times. What really pushes Left 4 Dead over the top and into my favorites collection is versus mode, which is by far the game's most fascinating feature. The basic setup is the same, but the special zombies (minus the über-powerful witch) are controlled by an opposing team. Versus mode is a blast to play, and it satisfied one of my long-standing gaming curiosities to boot.

In all of the single-player games I've ever played through, one thing I've always wondered about is what it would be like to be among the ubiquitous enemies that the game keeps sending my way. Would it be fun to direct the enemies against the hero and try to take him/her down? What would it be like to take control of a boss and try to crush the puny little hero in front of me? In Left 4 Dead I was given the opportunity to do just that, and it was at this point that the game jumped from good to great. Taking control of the special zombies is loads of fun, and in the scattered encounters with the monolithic tank Left 4 Dead has even managed to create the rush of a boss battle, something I've never seen before in this type of game. This feeling is extremely impressive, and I find myself looking forward to hearing the tank cue music every time I play.

A major drawback is the small number of maps and gameplay modes the game was released with. This too-little variety leads to a sense of repetitiveness, especially when playing campaign mode. There are only four levels, only two of which are playable in versus mode, severely limiting the game's best experience. However, if Team Fortress 2 is any indication Valve will likely be addressing this through all sorts of downloadable goodies in the future. Ultimately a player's satisfaction with Left 4 Dead is wholly dependent on how much he enjoys true team-based gameplay. Those who like to go solo and run off on their own will die quickly and likely will not enjoy the game, and the player's extreme dependence on his team can be a real problem in random matches. For me however, getting a group of friends together and zombieing it up (yes, I have made a new word) is an immensely fun experience, and upcoming DLC and patch releases should only make things better. Rating: 8.5 out of 10.