This One Time, Me and My Friend Keith… 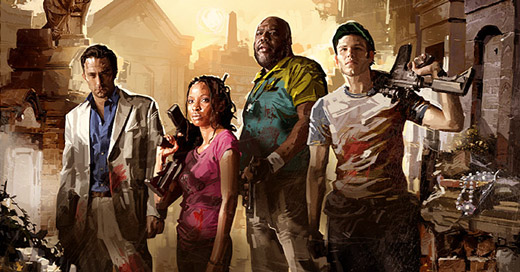 HIGH: Barreling through all four survivors with the charger.

WTF: Why can't the tank pick people up like the charger does?

The original Left 4 Dead, Valve's zombie-riffic first-person shooter from last year, redefined co-op gaming as we know it, providing a tighter and more team dependent play style than any other title in its genre. I've put about 120 hours into the game at the time of this writing, as the versus mode is near-endlessly replayable if you have the right people. However, after so much playing time the game's flaws and shortcomings become that much more apparent, like the universal "hide in a corner" strategy used by the survivors during horde events. Or some generally bland level designs. Or CPU players that completely ignore me when I need to be helped up. Or the extreme length of a full versus campaign. So while it might seem that Left 4 Dead 2 has the easy task of simply adding more content to its predecessor, there are quite a few things it needs to address to make itself worthwhile.

One thing is abundantly clear from the beginning—this game is hard, much more so than the original. And I don't mean that in the sense of "man, this part is kinda kicking my ass." Oh no no no. This is Battletoads level of challenge we're talking about. And to be quite honest, I wouldn't have it any other way, since it actually makes the non-versus campaigns fun to play.

While the regular co-op campaigns in the original were enjoyable enough, it eventually got to the point where my friends and I could blow through them on any difficulty with breaking much of a sweat. Left 4 Dead 2 is not so kind. Even playing on advanced difficulty is a struggle, with vastly improved zombie AI and new special infected specifically designed to counter the cornering strategy I mentioned earlier. The AI director has been improved as well, now having the capability to alter things like wall placement, lighting, and weather effects depending on the paths chosen by the players. Playing on expert difficulty is arguably harder than taking on a full team of players in versus, and adding in the new realism mode (no colored outlines on teammates and zombies do more damage) on top of that…well that's just for people that think Contra III was too easy.

Left 4 Dead 2 was released as a much more complete package than its predecessor. There are five full campaigns compared to the original's four (only two were playable on versus) and all five are usable on every game mode in some way. The levels are much more vibrant this time around—the game relocates from western Pennsylvania to ground covering Savannah, Georgia all the way to New Orleans. There is much more environmental variety this time around, as things can range from a daylight urban environment to a dark and muggy swamp, a welcome change from the four similar settings in Left 4 Dead. There are even special versions of the normal zombies unique to each campaign, which was also noticeably lacking. Fire and weather effects have also been utilized more effectively, especially in the Dead Center and Hard Rain campaigns. 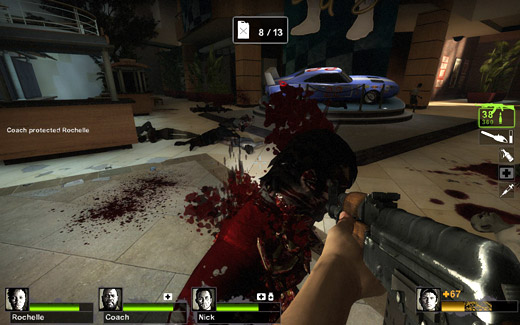 Most of the levels in Left 4 Dead have some sort of alarm that sets off a huge zombie rush, and usually the survivors would just hide in a corner and blast them away, making the event far less challenging than intended. Many teams simply began running away as soon as the event started, leaving the horde behind and taking the opportunity away from the zombie team to attack. Fortunately, Valve has gotten a lot more creative with events in Left 4 Dead 2, and by doing so has made them a much richer experience. Now the survivors must often complete some kind of objective before the horde stops, usually turning off an alarm or retrieving some kind of item. There are still events in the mold of the old ones, but even those are changed by the presence of chargers and spitters. In short, Valve recognized that people were playing the game in a different way than they had anticipated and adapted the sequel to counter it, making the game far more challenging and rewarding.

Playing as the zombies in either versus or scavenge is still the game's best experience, and the three new special infected don't disappoint. The burly, linebacker-esque charger is my personal favorite, as blasting through a team of humans that think they're safe is my favorite thing to do in the entire game. Along with the other two new infected, the jockey and the spitter, Left 4 Dead 2 presents a much finer line for the survivors to walk than the original. Get too far apart and the humans are easy pickings for the hunter, smoker, and jockey. Cluster too close and the spitter, charger, and boomer will have their way. This is a stark and welcome contrast to the original game, as survivors huddling against a wall during horde attacks made it practically impossible for the zombies to do any real damage. The new zombies, and the new style of events, change that for the better.

All of the gameplay modes from the original make a return, along with a new one that addresses the versus game length problem.Versus campaigns were by far the best feature of Left 4 Dead, but the near two-hour length was a big turnoff at times. Enter Scavenger mode, a 4 vs. 4 game that pits a team of zombies against the survivors for a quick set of matchups. This was exactly what I was looking for, as now I can play as the zombies without having to commit to a two-hour game. The four survivors themselves keep and sometimes exceed the charm that made the original group so endearing, especially Ellis's stories about his friend Keith. Rochelle is the big disappointment, as she rarely takes part in the banter and doesn't really say anything interesting when she does.

Unfortunately, the survivor AI still leaves a lot to be desired, making any game without at least four players considerably less enjoyable. While Left 4 Dead 2's CPU teammates are better about reviving me when I need it and not using their health items at stupid times, they still have way too much of a tendency to lag behind while also using grenade weapons hardly at all. Single player might as well be called training or practice mode, because that's about all it's good for.

As it was with the first game, what a player gets out of Left 4 Dead 2 depends on his expectations. Watching the game come to life with a full team is unique thrill among any game I've ever played, but without three other players the appeal is greatly weakened. If the player was disappointed by this scenario in the original, he'll probably be disappointed now too. However, with a wealth of new content and lots of other welcome additions and tweaks, Left 4 Dead 2 continues to focus on what it does best, and it's damn good at it. Rating: 9.0 out of 10.

Disclosures: The game was obtained via retail purchase and download through Steam and reviewed on the PC. Approximately 15 hours have been put into completing all five campaigns on various game modes.

Parents: According to  the ESRB this game contains violence, gore, and language. Left 4 Dead 2 is actually more gory than the original, as the damage to the zombies after being shot is much more graphic. It also seems like there's a lot more cursing, both from within the game and its players.

Deaf & Hard of Hearing: All of the audio cues can be captioned, and there is a colorblind mode to assist with the glows surrounding teammates if necessary.

Hey Richard! I was browsing through the internet to look for some reviews on Left 4 Dead 2 to see if a Left 4 Dead 3 version would be worth waiting for, and your article is definitely what I’m looking for. This is a great article regarding this topic because it has in-depth reviews and comparisons between the first and second versions of Left 4 Dead. Do you think the producers of Left 4 Dead should make a third installment? I really like Game Critics and I’m surely going to visit your website again in the near future.