I very much enjoy Left 4 Dead and Team Fortress 2. I have over 100 hours logged in both games and I continue to play today. So, when I first heard the announcement of Left 4 Dead 2 less than a year after the release of the original, my thoughts were of the skeptical variety. A sequel? Really? They hadn’t even released the map tools for the first game at the time. And where the hell is all the DLC Valve promised?

Well, it looks as if a lot of the things that were originally planned as free add-ons, like new special infected, different types of normal zombies, new weapons, and more robust melee combat will be rolled into Left 4 Dead 2 instead of being delivered via a series of updates a la Team Fortress 2. And my initial apprehension to a sequel notwithstanding, the more I see about these new features, the more I like them. It seems as though Valve has taken to heart many of the more serious problems with Left 4 Dead, such as survivors clustering in a corner during horde events and introduced possible fixes, like the two new special infected, the Charger and Spitter. Also on the horizon are new goodies like incendiary ammo and gauntlet-style horde events. All in all I think the new additions will be a tremendous boost, although I hope Valve follows through on the DLC promise this time.

I'm still dutifully waiting for Team Fortress 2's Engineer (my favorite class) update. One of the game's most glaring update needs in my opinion is some sort of defensive structure to replace the teleporter. Teles aren't worth all that much when defending the final point on Dustbowl, so some kind of shield or wall (possibly akin to the bubble shield in Halo 3) or maybe even a spy detector of some sort would be nice. 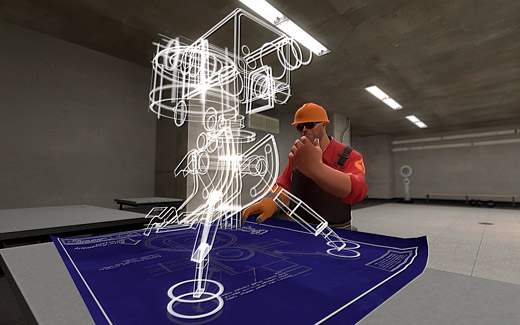 Valve has done a mostly good job as far as the individual class updates go, although the Razorback and the random item-drop system could've probably used another run of testing before being released. I'm perfectly fine with the unlockables-for-achievements system, assuming the achievements can be earned simply by being good at the game, and not the ridiculous feats asked of me by the medic update-seriously, why would anyone ever charge up their ubercharge, not use it, then go kill five people?.

Anyways, I eagerly await the engie, demoman, and soldier updates-here's hoping I get my shield generator. Anyone else have any creative update suggestions? And no, nude female pyro doesn't count.

Valve always seems to get it right-eventually. Their typical “over-support” for their games is the biggest reason why it surprised me that L4D2 was coming out so soon and thus L4D1 was nearing the end of its life-cycle. Nevertheless, I’m going to buy it anyway since it looks like a lot of the kinks in the original will be ironed out.

I really have enjoyed TF2 (until my PC died and I switched to Mac) and L4D. I haven’t seen a lot about Valves financial statements or discussion of their business model on my favorite gaming websites. It surely seems like Valve is raking in the cash hand over fist with direct sales via Steam in addition to the sale of boxed games from retailers. Lately, it seems like the number of free upgrades has surpassed the number of free upgrades for their previous games. Back in the day, we all paid for Opposing Forces and Blue Shift. The relatively quick… Read more »

I’m not sure about engine modifications, but I would imagine that they would be a big reason behind releasing a sequel rather than simply updating the first game (Valve also stands to make a considerable profit) since they were talking about a lot of the changes/additions (especially the new boss infected) before L4D2 was ever announced.

I, as well, am a HUGE L4D fan. No other series provides such a great platform for co-operative action. I love it. Talking your way through intense battles with teammates is one of my all-time favorite gaming experiences. While swallowing the news of the new platform is difficult, I wonder why we’ve heard so little about the game’s updated engine. Does it have an updated engine at all? I’m not sure, ’cause I haven’t read anything about it. I will say, however, that after playing the game at E3 on two consecutive days, it truly felt as if the developers… Read more »