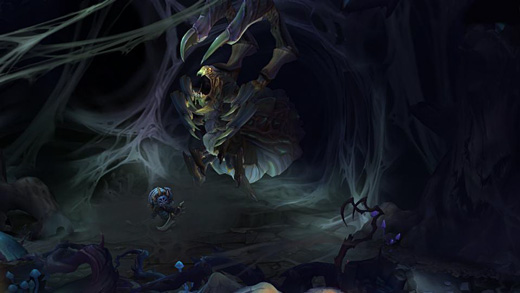 HIGH Catching an enemy in Veigar's combo and watching their health go from full to zero in about two seconds.

LOW Being on the purple team and having my view obscured by the HUD.

The enemy is pushing mid-lane hard, and our second turret is already down. I rush up from bottom lane just in time to meet up with the rest of my team.

After poking back and forth for a few seconds, their Vayne comes out just a little bit too far, and I nail her with a chain pull. I dash-pull over to her, use my E to send her towards my teammates, hit her with exhaust, then pop my ultimate. Vayne goes down quickly, and just like that, the enemy's biggest threat is gone.

Their Sona and Ryze are both caught in my ult, and our Darius starts cleaning house. We barely miss an ace when their Kha'Zix manages to leap away.

To the uninitiated, the preceding passages are probably meaningless. League of Legends, the undisputed ruler of the Multiplayer Online Battle Arena (MOBA) genre, has spawned its own vocabulary, to the point where any conversation about it between seasoned players can seem like a foreign language. While that can make the barrier to entry appear quite high, the language analogy also works in the other direction—once one spends enough time among native speakers, it becomes natural.

As the spiritual child of the original Defense of the Ancients, the rules of League of Legends are pretty simple: There are two teams, each with a nexus. The object of the game is to destroy the other team's nexus. Teams are composed of three to five (depending on the map) player characters, or "champions" as the game calls them. The game is played through an RTS-like interface with a mouse and keyboard, but the player only has direct control over his champion.

The possible team compositions are nearly endless—with over a hundred different champions to choose from, each game is different than the last, making for near-infinite replay value. This variety is the heart of League's popularity—no two games are truly alike, and with all the various champion abilities and applicable strategies, something that works in one game may flounder in the next. Veigar might wreak havoc on Katarina in mid lane with his high burst damage, but other champions can absolutely stomp him. 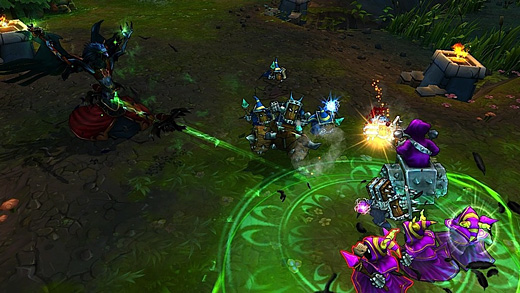 This unpredictability goes beyond the champion abilities and into what items one can buy for them as well. While champions are divided into classes based on their stats and powers (tanks, ranged fighters, support classes, etc.), the in-game items and customizable skill trees allow for any champion to be built many ways. If one truly wants to build Veigar as a tank or Soraka as a jungler, they may do so. It may not work well, but the deep customization options allow for so many different builds that anything is possible.

Playing with and against players who know what they're doing and can use their champion's strengths effectively is one of the most satisfying gameplay experiences I've ever had, but unfortunately this happens far too infrequently. The majority of the games I play through the random matchmaking system usually feature one team getting steamrolled pretty hard, whether I'm on the winning or the losing side. Sadly, a lot of players don't seem to care much about teamwork or even trying to win.

For example, I once saw an Annie who bought nothing but sight wards (which reveal an area around them for a few minutes) and placed them in a straight line down each lane, while never once attacking an enemy. No other items, no ability upgrades, nothing. People intentionally screw their team like this quite often, which gives me a chance to talk about the much-maligned League community. It has a pretty bad reputation, but I am here to say that it isn't that bad.

Even with my vast Team Fortress 2 experience I am continually taken aback by the callousness and immaturity of random players I encounter. While Riot has taken some pretty innovative steps to curtail this (mainly via the Tribunal judgment system) the negative attitudes are still overwhelming. Fortunately, I have a dedicated group of friends who I team up with regularly, so I usually don't have to deal with it. However, for those without that luxury, playing against other players can be an exercise in one's tolerance for repugnance.

Personality defects aside, there are a few technical problems with the game.

The purple team (whose base is at the top of the screen on the most popular map) often has their view obscured by the HUD, putting them at a distinct disadvantage because the direction they need to be looking in is frequently blocked. While this is something I might forgive in a new game fresh out of the oven, after almost four years it's baffling to me that there isn't some option to flip the HUD or anything else to make it easier for the purple team to see. The game is also prone to crashing during the loading screen, which can really hurt if I'm a dedicated lane partner for someone and they have to face two enemies by themselves.

A game like League is never truly "finished." New content in the form of champions, game modes, and play tweaks are constantly coming down the pipe. However, after almost four years and phenomenal popularity, it's certainly mature enough to be evaluated critically. I find that with League of Legends, Riot has cultivated one of the most unique spaces in gaming history—mostly for good reasons but also for some awful ones, and in the gaming museum of the future, League is sure to have its own wing. Rating: 8.0 out of 10.


Disclosures: This game is free to play and was reviewed on the PC. An ungodly amount of time was devoted to multiplayer modes. There are no single player modes.

Parents: According to the ESRB, this game contains blood and fantasy violence. The community's reputation speaks for itself, so while I wouldn't necessarily bar my kid from playing it, I would monitor his/her behavior very closely lest he/she become one of "those" kids. As for the game itself, there's a few off color jokes/dances by some of the characters, but nothing to be concerned with.

Deaf & Hard of Hearing: While nothing is totally audio dependent, players without audio will have to pay extra attention to their maps wince they will not be able to hear the ping sounds.

Thanks Crofto. The community is definitely a major part of the game, and its reputation is totally warranted. While that isn’t Riot’s fault, it is their problem, and they’ve taken some interesting steps to deal with it.

What’s an example of a game that has a “good” community?

The other posted mentioned that the WoW community sucks. I have heard similar things about the DOTA2 community. The reviewer also mentioned Team Fortress 2, implying he has experienced that level of bad and League of Legends was even worse.

I wouldn’t really know as nothing that has ever been said during a multiplayer game has offended me. To be honest, I would like to see rooms/lobbies/whatever with relaxed rules in any M-rated game.

When I used to play on Xbox Live a lot, most people didn’t even talk.

I just want to say this is a great article. I love League of Legends, however I recommend this page edited and reviewed from time to time. With every patch, this game changes drastically, and there are new game modes created all the time. For example, one of my favorite game modes which I wish they brought back was the ultra hard bots. This was an awesome challenge, because the bots had reduced cool-downs, no mana cost, and their ults were insane (EZ’s ult went 4 different directions). Also, on this website (http://www.cheapestgraphiccard.com/game-review/cheapest-graphics-card-for-league-of-legends/) they mention other game modes that have… Read more »

This was a nice read, a lot of what you said, i couldn’t agree with more. I’ve played league of legends since season 1, over 4+ years and it’s still my favorite game but the luck factor is always a bit flustering considering it’s 9 random players plus yourself there is always that luck factor. I have a site dedicated to league of legends if anyone may be interested, http://elohut.com/

Nice review Richard. I like how you factor in the game’s community as a positive/negative aspect of the game, since it is essentially an external and variable factor. However, the sole reason I avoid games like LoL is because of the steep learning curve and the toxic community. Those two factors do not create a welcoming atmosphere, but I’m sure LoL players are happy to keep it that way. It has enough players to sustain itself, clearly. The key benefit of reviewing the game at this stage is that you’ve been able to sample and report on the game’s community… Read more »