Who is Lunar Workshop, and where are you based?

I founded Lunar Workshop earlier this year to develop indie games. Currently it's me and two contractors, an artist and a composer. A three-man team is pretty small as per game industry standards, but here at Lunar Workshop we like to keep things simple. The company started by making a AO/Normal map generation tool called SMAK. But we're not just here to talk SMAK, so we recently began developing video games as well. We're based in the Raleigh, NC area, which is pleasant for two thirds of the year and too damn cold for the other half.

What's your background, both personal and professional? What's the story of your studio, or what's the studio's mission?

I was one of those kids who, when all of the other kids were out playing tag and ring-around-the-rosie, I was on my IBM compatible Windows 3.1 machine programming QBasic games because I enjoyed it. I started learning programming when I was 6 and it didn't take long for 6-year-old me to stump my dad (the computer engineer) so I was self-taught from an early age. My first program was "Hello World" but everything I wrote since then has been a game. I've always been attracted to making video games for some reason. I spent a lot of time when I was younger making MUDs and building mods for Quake, Half-Life and Source. One of the bigger projects I worked on was "The Specialists", a Half-Life mod that was pretty popular back in its day. I worked with a big team of artists and level designers all over the world, doing most of the programming and game design for versions 2.1 and 3.0.

At one point I decided I wanted to put my hobbyist days behind me and develop games for a living. I was a software consultant and contractor in my area for a long time, which I loved because I got to be my own boss (although it's not as fun as it sounds.) I made a good living for a long time being self-employed so I decided to draw from those skills to start Lunar Workshop. I'm aiming to build a small and fully independent self-published studio that focuses on PC downloadable games. (And we also sell SMAK.) The name is Lunar Workshop because I often work late into the darkest hours of the night when the only things alive are me, my dog, and whatever it is that keeps making that scratching noise outside my window.

How did this project come about?

I played a lot of Scorched Earth when I was younger and I was always disappointed that none of the newer entries in the artillery genre moved to 3D very well. There are 3D artillery games but the feel isn't the same and the gameplay is drained of all the fun by all that extra aiming and calculation. So, I wanted to see if I could fix that. Digitanks isn't about aiming tanks so much as about managing tank energy, so it takes a lot of the micromanaging out of artillery games. From there the game evolved into more of a strategy game, partly to quench my insatiable thirst for strategy (I love games like Civilization and Red Alert) but mostly because the game needed an extra bit of spice.

Once I had the basic prototype up and running, I brought in an artist to help take off some of the load. Adam Winsor is a fantastic guy who was a perfect fit for the project and he was thrilled to help out because he also played a lot of artillery games as a kid. 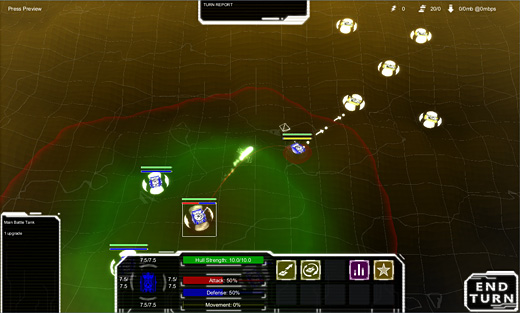 What was the inspiration for setting the game inside a computer?

When I was designing the game I realized my resources would be limited, so I restricted myself to art types that would be easy to develop. I loved the visual style in Tron and its visual style is pretty easy to work with. So honestly, that visual style stems out of it being the easiest to get to look good. Between you and me and everybody reading this interview, my motivation for the "inside a computer" setting was largely to cut out a lot of work. For example I designed the game so that there would be no animations required, which removed a huge chunk of work right off the bat. Since every animation is really just procedural, I never looked at a 3D animation studio for the entire project.

Besides that though there's huge advantages to not having to work inside a "real-life" setting. It frees up the design a lot when players aren't worried about things being realistic. In a AAA game if something is a little bit odd it sticks out a lot, but in Digitanks I can make things look however I like because nobody is expecting them to look realistic, only consistent. That lets me and Adam be more creative as far as what things look like and how they behave. Once we got into it we realized how much fun there is to be had in a computerish setting, like making the tanks have smileys :D! and the fourth-wall aspect of letting players control what's going on inside their own computer. I used to do "realistic-style" games but I don't think I'll be going back there soon, it's too much fun out in fake-world.

What went well for you, and what have been your biggest challenges in development?

Oh, man. Let's start with the challenges. One of the biggest mistakes was not allocating enough design time. Previous games I worked on followed a pretty steady formula that'd been established by other games. For example, most first-person shooters use the same basic mechanisms that nobody really thinks about anymore: ironsights, zooming, reloading. Digitanks on the other hand broke new territory with its strange combination of mechanisms. There's lots of strategy games but not so many with bases and turn-based and artillery. I tried not to venture too far off the beaten path, but there was lots of things that needed ironing out. So, I got to a point where the game was working fine but wasn't fun, and I had to put off my schedule quite a bit to work on design. That meant playing the game over and over again, removing things that didn't work and massaging the "fun parts." It can be one of the biggest chores in game development, but in this case it paid off.

Another big mistake I made was not doing enough planning for the visual style. Initially, I had wanted the entire game to be a bit more, for lack of a better word, silly. Silly like World of Goo or Psychonauts. Sillier music, sillier tanks, sillier everything. The problem was, that wasn't well-established enough at the onset, so we forged ahead with a more serious visual style until I suddenly realized that none of it was very silly, and we didn't have enough time to go back and redo it. I was forced to go with a more serious style. We brought in a composer, the genius man of musical foundations known as Ivan Porter to rework the silly music into something more powerful and energetic, and he produced what you hear in the trailer. Overall it wasn't a huge loss, but I think the game could have had a lot more character if it had taken itself less seriously.

One thing that I think went well from a business standpoint was my decision to keep it simple. My last couple projects all had large scopes and large teams. With so many people, the effort it took to coordinate could sometimes be more than the benefit that more manpower gave. Keeping the scope of the project simple and the team size small has been a huge benefit. Both the artist and the composer are people I've been working with for years, so communication is easy and progress gets made on things a lot faster than when I worked on larger teams. In just four months we reached the same point of progress that we spent two years trying to get to with one particularly unwieldy previous project. 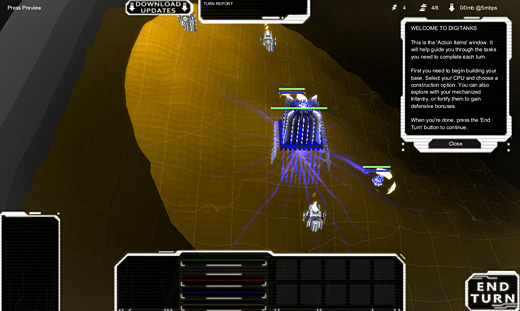 What parts of the game would you say you are most proud of? Any areas you feel still need improvement?

Oddly enough, I'm quite proud of the Rogue. The Rogue is a small recon unit that's used in the early game to torpedo enemy supply lines, which can cause the structures they've built to get disconnected and become neutral. The reason I'm so proud of it is because it was used quite effectively to solve the problem of a slow early game. I'm huge on problem solving, so when I'm able to nail a problem on the head it's a good feeling. Before we had the Rogue there wasn't enough action in the first two dozen moves of the game, but the Rogue's torpedo weapon makes it a formidable opponent even though it doesn't actually deal damage to structures. The threat of getting your structures disconnected is pretty serious and mandates good defenses, which really spurs a lot of action in the opening moves of the game.

As for things that need improvement, I think that's a question that you should never ask a game developer because just like any artist they're going to say, "Everything." I have a long list of stuff I would love to add and improve that we just didn't have enough time to include for the first release. A lot of this we're going to be adding in future updates though. For example, we have lots of ideas mind for new structures and units, new gameplay modes, and new kinds weapons. I want to add a Digicopter that would be a flying unit that players can use to bomb enemy positions, and a "capture the data" game mode where it's one team's objective to get a data disc to the opposite side of the map while the other team has to stop them. I have an "ideas" list that would be a dozen pages printed.

Valve has been a huge influence on my game development methodology for a long time. I've taken two trips to their offices to meet them and attended many GDC talks given by Valve employees. They very consistently produce fun high quality games. One of the things they excel at is usability, I sat my eight year old cousin in front of Portal and he was able to learn how to play the game without help from me. That says a lot about how good their execution is. My playtesting techniques come straight out of their playbook.

I've also been learning a lot from some of the more established indie developers. I try to hang around the same internet-places as established indie authors and I've learned a lot about how the business of indie games works.

Open mic. What's one thing you want readers to know about your studio or your game?

If you want to show your support for Digitanks and Lunar Workshop there's a couple ways to do it. The biggest one is to pre-order which will help me feed my dog and earn your name a spot in the credits. You can also join the Steam group and the Facebook page or follow me on Twitter.