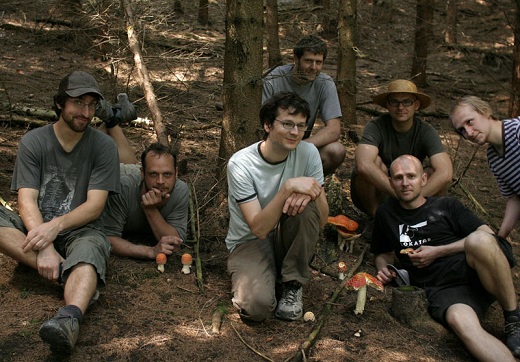 I recently had the pleasure of playing Machinarium, a fantastic adventure title from indie developer Amanita Design. Currently available on Steam and on their website, Machinarium has received accolades from many critics, myself included. Their CEO, Jakub Dvorsky, was kind enough to answer a few questions for me about the game his company, and his team (pictured above).

First off, tell us a little bit about yourself, what you do at the company, and how Amanita Design got started.

JD: I was born in Brno, Czechoslovakia and I still live here however it's only Czech Republic now. I studied at the Academy of Art, Architecture and Design in Prague and my diploma work was Samorost, my first Flash game. After my studies, in 2003 I established Amanita Design studio. In 2005 joined me animator Vaclav Blin and together we created sequel to my thesis – Samorost2. Since then we have found several excellent collaborators – musician Tomas 'Floex' Dvorak, programmer David Oliva, painter Adolf Lachman, sound maker Tomas 'Pif' Dvorak and animator Jaromir Plachy. Besides independent and commissioned flash games (Samorost1, Samorost2, The Quest For The Rest, Rocketman VC, Questionaut) the studio created also a couple of music videos (Plantage, Na tu svatbu),  websites, animations, illustrations and production design. Now we are focused mainly on games, but most of us have also some side projects, Vaclav Blin is preparing very strange interactive music video, I'm working on production design for animated feature film, Adolf Lachman is freelance painter and sculptor etc.

The artistry and music in Machinarium were superb-what sort of professional backgrounds do you and your co-workers have?

JD: Most of us are educated artists, me, both animators are from studio of animated film at the Academy of Art, Architecture and Design in Prague and our painter and also music composer are from different Academy of Art in Prague.

Where did you get the inspiration for Machinarium's setting and main character?

JD: When I was designing Machinarium world I was strongly inspired by old rusty machines, abandoned factories and industrial buildings. Of course besides this direct inspiration I was influenced by many artists, filmmakers and also writers (Yuri Norstein, Karel Zeman, Stanislav Lem, Jules Verne, Leonardo da Vinci, Max Ernst and many many others).

How much time did it take, from initial concept to rollout, to make Machimarium?

JD: It took us almost three years. It's very long time and it wasn't easy to stay focused on only one project all the time. Of course the whole game also changed significantly over the time. The basic concept was much simpler and our idea was to create longer but quite simple looking game and we thought it will take us about one year to finish it. In the end I'm really glad we spent all that time on it, because it's much better and more polished than what was the initial plan and it definitely paid off.

What was the hardest part of making Machinarium? Was Machimarium ever in any danger of not being finished?

JD: I was a bit worried about the technical side of the game until I found our current programmer and putting together the whole team which consists of 7 people was perhaps the most important part. Everybody has to be really passionate about the development as it's long and sometimes  frustrating process. The worst moment was, when I had to say goodbye to our first background painter who is talented, but he wasn't really interested in the game and was extremely unreliable. Then I had to find another painter very quickly – I was really worried about the whole project at that time, but I was lucky to find the best artist possible who was keen to work with us.

What are some of your (or your co-workers') favorite games, and how have they influenced your work?

JD: Here are some of my all time favourites: Myst – when I played Myst for the first time in 1993 I was inspired by it's atmosphere, graphics and logical puzzles and immediately started to learn how to make 3D graphics. I gave up and returned to 2D graphics a couple of years later, but the logical puzzles are still my favourite. Neverhood – probably the most inspirational game for me. Truly masterpiece. I love it's clay characters, environments and animations, the soundtrack, the story and puzzles but the most wonderful is the world where the game takes place. Grim Fandango – brilliantly written game. Great story, dialogs and world. I Have No Mouth And I Must Scream – I love the gloomy atmosphere and really deep story. Gobliins – very lighthearted game with funny characters and surreal puzzles. It was strong inspiration especially for my first Flash game Samorost.

You don't use any dialog to tell story in your games-how did this come about?

JD: We had several reasons not to include any language in our game. First of all I'm poor writer, it's also more accessible, easier to localize and it's also more funny – I don't have patience to go through those lengthy dialogues in most of the adventure games. However there is some kind of communication with other characters in Machinarium – it's all done only by comic bubbles with animations and symbols.

Most of your games are point-and-click adventure games-where do you see the genre going in the future?

JD: Yes this genre suits us well so far, however we want to experiment also with other game mechanics and try to enrich our games as much as possible. I don't know if this genre will be still called point-and-click adventure in the future but games, where the story, puzzles and relaxed pace are the main characteristics, will definitely stay here.

There are a number of standalone flash animations and websites featured on your homepage. Do you see Amanita moving away from games at any point? What is in the future for Amanita?

JD: Of course we had many general ideas, but it's too early to talk about it. We definitely want to continue in independent games development and maybe we will try to experiment a little and push our style a bit.

Big thanks to Jakub for taking the time to talk to us and for helping to produce such a great game. Here's hoping we see more from Amanita in the future.

Those were good questions, thank you for sharing them.

Crap, I should’ve asked them how the game was doing financially. Oh well.

Good thing we have Richard to give this wonderful game some visibility. 🙂 If you play the game, 3 years make perfect sense for the amount and quality animation details they’ve put in the game with such a small team. Hope the game is selling well enough to pay for their investment. I want to see more work from these guys.

I am really surprised that it took 3 years for Machinarium’s development. For some reason (maybe because it’s flash based) i thought that the development period would be a lot shorter.