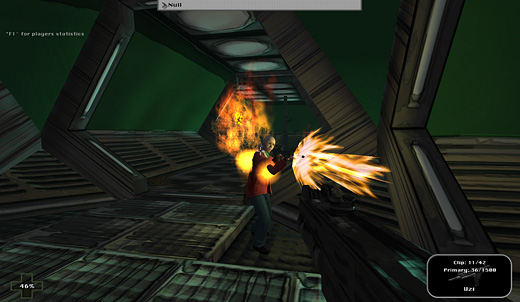 HIGH The first conversation with HEIDI.

LOW Not being able to save my game in certain areas.

After reading Sparky Clarkson's wonderful piece on the concept of camp in games, I came away convinced (as I had been before reading it) that a campy game is an nearly impossible thing to pull off, mainly because the novelty of camp wears off very quickly over the course of the time needed to complete a game. After playing the first episode of Magarathean Technologies' Incognito my viewpoint has changed. The graphics are dated, none of the gameplay really stands out, and there are quite a few technical problems, but I was still drawn in. The concept of a spastic tribute to old-school PC FPS/RTS/Tank Combat games (all in the same game mind you) was just too good.

Episode 1 begins with a middle-aged investment banker down on his luck. He has no family, no real friends, and his portfolio is in dire straits. Resolving to commit suicide, he jumps off the roof of his office building and at the last minute is saved by an immensely powerful alien entity named HEIDI. HEIDI is dying, and requires help in order to survive. Discovering that the protagonist has lost all purpose in his life, HEIDI offers him a new reason to live in exchange for saving her. After agreeing (Note: don't call HEIDI a bitch when you first meet her) the banker is placed in command of her ship and given tasks to repair HEIDI.

The influence of the Hitchhiker's Guide to the Galaxy books is evident from the beginning. In addition to the name of the development studio and the sight of a shiny "Don't Panic" poster during the opening segment, the eccentric air that surrounds the game universe feels like it's right out of a Douglas Adams book. This is a definite asset, as it was this charm that kept me interested in the face of the game's dated and clunky exterior.

Speaking of which, while the 90s-style graphics do lend themselves quite well to the game's motif, there are more than a few drawbacks. For example, the low level of detail on the enemy models can make them extremely difficult to see, especially in the tank segments. The often-similar background colors don't help either. The game is also far too resource-hungry for having Unreal Tournament level-graphical quality. Half-Life runs without a hitch on my PC, so there is absolutely no excuse for this game to cause a Radeon 4950 to sputter.

Although the concept of so many game types in one not-so-pretty little package was very intriguing, none of these mechanics are done well enough to stand on their own. Every piece of this game feels outdated, but not in an homage way. While it's clear that a lot of effort went into recreating the look and feel of old PC games, the gameplay here just isn't up to snuff. The FPS is hamstrung by unintuitive weapon switching and frustratingly relentless AI. The RTS is sorely missing the S, as every engagement turned into a game of whose AI would screw up first. The tank combat was the best of the three game types I saw, although the graphical and artistic style hinders it greatly.

However, the single biggest problem is the fact that I could never save my game when I was on foot. This almost caused me to abandon the game early on, and only the promise of the opening kept me going. I realize that Incognito is trying to emulate older games, but having to keep going back through the same tank segment again and again only to die by a sudden onslaught of robots was insanely frustrating. Had I been able to save my game in some places it would not have been nearly as bad. I'm extremely curious as to whether this was intentional or not, since if it was it's definitely something that needs to be done away with.

Incognito feels like it could be something beautiful; a sterling homage to a game generation long since past. It's obvious that a lot of love went into this project. However, it needs some more time in the incubator to iron out its flaws and dispense with some of the things that are best left in the 90s. I'm very hopeful that future episodes will take advantage of the potential oozing from this concept and guide Incognito to that wondrous, wildly imaginative place that so few games can reach—its own Magarathea. Rating: 6.0 out of 10.

Disclosures: This game was obtained via publisher and reviewed on the PC. Approximately 6 hours of play was devoted to completing the game once.

Parents: At the time of this writing this game has not been rated by the ESRB. The concept of depression and suicide might be a little too much for some kids, and there is a lit of blood flying in some places. But then again, the graphics are so blocky and the rest of the atmosphere so lighthearted that I would think it'd hard to to interpret that as scary.

Deaf & Hard of Hearing: Players with colorblindness or other vision problems may have some trouble, as the color schemes and lack of detail on models can be tough to see in some cases. All spoken lines are subtitled and while audio cues really helped in some situations, they aren't essential to the game.

I was actually more wondering about where you had heard of it, although there might not be such an elaborate story if it wasn’t worth mentioning in the first place.

Zippy’s link is right. It’s a fairly obscure title, but hopefully this gets the series some more exposure. It has a lot of potential.

Where did you find this anyway? I was hoping to find the answer in the review.