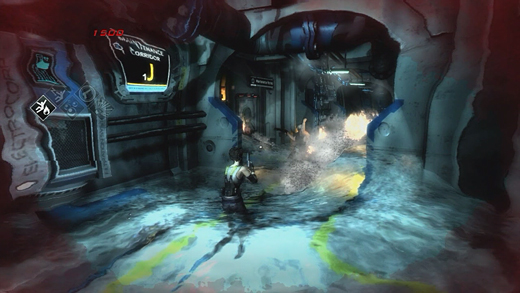 New technology is almost never fully utilized until it's generally been available long enough for its true utility to be understood. The home PC was once an oddity, and now can be found everywhere in the world. Cell phones used to be an exclusive perk of businessmen in nice suits, and now your average 14-year-old has one.

Hydrophobia's main selling point is the new HydroEngine, touted as a revolutionary implementation of in-game fluid physics; a true improvement over the usual texture work or areas with different gravity and sound effects. The HydroEngine's aims to bring realistic liquid behavior into interactive 3D environments has not, to my knowledge, been done before in a game. Dark Energy Digital is going for something big with this, and in terms of the HydroEngine itself, they have succeeded—but is there an actual game here, or just a tech demo?

The single best thing about Hydophobia is an ability called "water kinetics." The player is able to "pick up" chunks of water and move them around, make waves with them, and do all sorts of other superpower-type things. Throwing explosive barrels around or watching a giant crate slowly rise from the depths is very satisfying, as I think I spent about an hour just playing with this power—kind of like a wetter version of Garry's Mod from Half-Life 2. It is a game-changer, a showstopper, a deal maker, and a hard charger all rolled into one. Now, before I go on I want to make sure that all the preceding compliments I paid to water kinetics sink in, because I want to explicitly illustrate the full meaning of what I'm about to say. OK, ready?

The water kinetics ability is not in the main game. At all.

In fact, water kinetics is only usable in the Challenge room, which can only be accessed after beating the main game. Hydrophobia literally hides its best feature behind a substandard third-person shooter/platformer, and forces the player to endure all that awfulness before showing anything even remotely worthwhile.

Hydrophobia's campaign plays like a low-rent version of Uncharted. The acrobatics suffer tremendously from slow and often unresponsive controls, and framerate slowdowns in areas with lots of water make things even worse. The combat portions are besmirched by boring weapons and needless bullet-sponge enemies, and of course the camera (everyone's favorite 3D whipping boy) makes life miserable here too —especially when swimming. The campaign is a dull, uninspired experience with absolutely no shred of creativity to its name. If only there were some sort of special ability that could break the tedium and make this worth playing…

On that note, for all the vaunted talk of revolutionary water physics, the game is less about showcasing what the HydroEngine can do and more about lots and lots of running, jumping, shooting, and swimming. Hydrophobia isn't good at any of those things. The only time the game truly impressed was when I broke a window or opened a door, and a flood of water came rushing in. Wading my way through a half-flooded hallway felt right, as I was constantly tossed around by waves while the movements of enemies or objects elsewhere in the room caused realistic effects back at my location. It really would have been nice if I could have some way to go all "Storm" on the water and toss enemies around like the ragdolls they are.

Too bad they couldn't, you know, find some way to do that.

I don't think I've ever been quite as baffled by a design decision as I was with Hydrophobia's non-inclusion of water kinetics in the main game. We have a wonderful gameplay mechanic here with tons of potential for all kinds of kooky hijinks, and instead of showcasing that mechanic at every opportunity, Hydrophobia wraps itself in a layer of raccoon sh*t. The HydroEngine is absolutely for real, and is truly deserving of the word "innovative." Why the developer chose to hide this feature behind a downpour of mediocrity I will never understand.

Like any scientific breakthrough or new invention, Hydrophobia does represent a significant achievement in its own right. We're just going to have to wait until someone does anything worthwhile with it. Rating: 2.0 out of 10.

Disclosures: This game was obtained via publisher and reviewed on the Xbox 360. Approximately 5 hours of play was devoted to completing the game once on normal difficulty, and approximately 1 hour of play was spent in the challenge room.

Parents: According to the ESRB, this game contains language, blood, and violence. There is a fair amount of cursing, but the blood looks so bad that I didn't know what it was at first. Still, I'd keep kids away.

Deaf & Hard of Hearing: You may have some problems. While all the spoken lines are subtitles, audio cues are used pretty heavily to notify the player when combat begins and ends. Without being able to hear the music changes I think I would have a lot of trouble running right into a shotgun-wielding enemy.

“Hydrophobia wraps itself in a layer of raccoon shit.”

Full retail release or not, I expect a game to be at least competent. Hydrophobia isn’t.

So its more game prototype than game, it is DLC after all you kinda have to expect it sometimes.