C'mon! Through the White Castle! 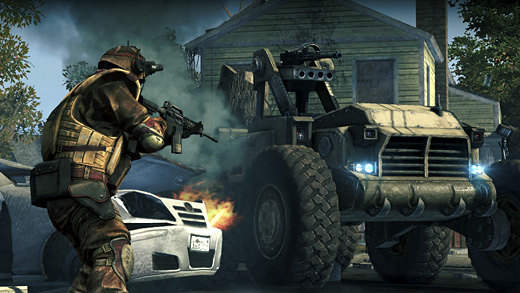 HIGH Running over someone with the humvee in multiplayer.

LOW Being killed by an unseen grenade/gas barrel/guy hitting me with the butt of a gun while my AI teammates shoot backwards.

WTF There are so many I'm willing to risk fines & sanctions by listing them all:

-Dying and being respawned well ahead of where I was.
-That the back of the box has the audacity to say "groundbreaking 32-person multiplayer."
-"New objective: follow Connor." New? I've been doing that almost the whole game.
-The absolute worst hidden rebel base of all time.

I think we're at something of a crossroads when it comes to dealing with war in games. Despite the numerous advances in storytelling over the past few years, we have yet to see gaming's Apocalypse Now or Full Metal Jacket. A game that can have a similar impact on how we perceive war would be a monumental achievement for the art form. Sadly, Homefront

is far from being that game, even though it desperately wants the player to think that it is.

Technically speaking, Homefront is a modern FPS, and I use the word "modern" in a derogatory sense. Oppressively linear and unwilling to let go of my hand for even the slightest moment, the game treated me like a seven-year-old the entire time. One particularly bad example is when I had to take a sniper position in a nearby tower to protect my teammates below. Every single target was relayed to me on the radio and pointed out with an objective marker. The ever-present hints and markers sap any tension or sense of accomplishment.

Even as an overbearing, formulaic experience, Homefront still manages to get a lot wrong. There are roughly five million different kinds of guns in the game, and while there's very little difference between most of them, they all seem to require different kinds of ammo. Running out is far too common an occurrence. AI squadmates usually aren't that smart to begin with in these kinds of games, but Homefront's crew manages to set a new standard for incompetence. I can't count the number of times I saw friendly NPCs running right past an enemy, running backwards for no reason, or just shooting at nothing.

And even when it came to the ground vehicle portions, I wasn't allowed to drive-the game just gave me a simplistic targeting scope and sent me on my merry way. I literally only had to look in the general direction of targets and press the fire button to blow things up. It was like looking at a chess board and saying "win." 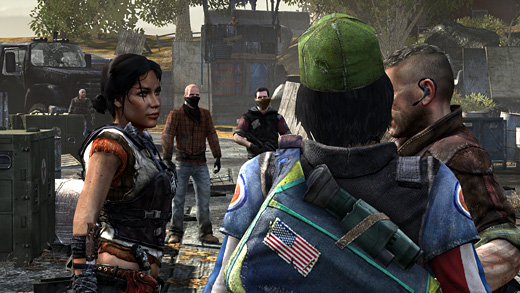 Of course, comparing Homefront to chess is still being too kind. This game is the most mindless, uninspired, right-wing power fantasy that one will ever likely come across.

Set in the near future when a mass of global crises somehow enables a united Korea to conquer most of the United States, the player is cast as a revolutionary trying to help fight back. The events leading up to the invasion are dubious to say the least. I mean, North Korea just integrates with the South seamlessly? Really? Still, the ultra-shaky Tom Clancy-esque plot isn't even the worst part-I've played games with awful stories before and lived to tell about it. The most insulting thing about Homefront is how it constantly tries to trick the player into believing it's special.

As I said, the game takes place in the United States; the Western portion to be exact. The main draw here is "what if war was on your front doorstep as opposed to being some far away concept you never have to deal with?" That's certainly a worthwhile premise to explore within a game. As such, we're constantly presented with images meant to invoke a sense of horror, like a baseball stadium being used as a concentration camp, a bombed-out suburb, and even some racism sprinkled on for good measure.

The comfortable world we as Americans (or any other country that's been free of war) have enjoyed for our whole lives is shattered, and the grim reality of what much of the rest of the world goes through on a daily basis is now staring us square in the face. I should feel varying senses of terror, revulsion, and outrage here. The problem is, none of it feels authentic due to the oppressive linearity I mentioned earlier.

The scenes and events that were supposed to grip me emotionally felt more like I was just riding past them, rather than experiencing them. The concentration camp segment felt like I was doing a quick passing by rather than actually taking in something terrible. Instead of actually feeling the kind of terror and helplessness that someone caught in this situation would feel, I'm a superpowered machine with no real concerns whatsoever.

Such overdone hand-holding makes it impossible to forget that I'm playing a game, and thus impossible to form any sort of connection with the events in the game's world. So, as it tries to stand out from the Call of Duties of the world, it actually blends in even more.

Games as an art form are ready for that next big step, I think. We're ready for that true war game that explores all of a conflict's facets and ramifications, but for now we're stuck with drivel like Homefront that's still about Buff McRockHard fighting evil foreigners. Homefront

is the most insidious kind of bad game-it's the kind that masquerades as something more special. Rating: 3.0 out of 10.

Disclosures: This game was obtained via publisher and reviewed on the Xbox 360. Approximately 7 hours of play was devoted to single-player modes (completed 1 time) and 30 minutes of play in multiplayer modes.

Parents: According to the ESRB, this game contains blood, strong language, and violence. There are lots of scenes that are meant to be scary and intense, including the sights of mass graves and torture. No kiddies.

Deaf & Hard of Hearing: You should be fine. All spoken lines are subtitled and audio is not a significant factor in gameplay.

Fair enough, I’m happy to agree to (somewhat) disagree. I saw more to appreciate and enjoy in the game than you did — I don’t want to repeat myself too much, so I’ll just mention two things: the imaginative attention to detail in the environments (take for example the guy on the water-pumping exercise bike in the rebel base and the cleverness and care that went into imagining and animating that contraption), and the many cinematically striking or dramatically effective (semi-)scripted sequences (the phosphorus lighting up the night sky over the mall parking lot, Connor’s helplessness as his squadmate goes… Read more »

@wily_codger You’re right in that linearity isn’t a problem by itself, since at their heart pretty much any single-player experience is linear. However, the linearity is so overwhelming it was impossible for me to truly take anything in. My window into the world is (usually) the reactions Connor has to things, and through that lens it feels like I’m watching the atrocities rather than playing them. As a result none of it was even remotely memorable to me. I obviously disagree that the faster-paced gameplay was a better fit than something that let me explore. Letting me off the leash… Read more »

Yes, it’s a linear experience (though hardly more so, in a world of shooters like Far Cry 2 and Borderlands, than Half Life 2 or Call of Duty:MW), but I don’t see that as a problem in and of itself, and I thought it was a fine fit for Homefront’s story. Homefront is the story of a single urgent mission that takes place over the course of just a day or two; what’s more, the player is part of a team that’s familiar with the gameplay locations & knows exactly what it needs to do. In this context, it would… Read more »

Heh, glad you spotted just how unbelievably awful their attempts to conceal the Rebel Base were. You can see the damn place from nearly any adjoining window, with clear views of it from the sky. I can only imagine how proud Boone must have been about the place while designing it, and nobody had the guts to tell him how bad it was in case they hurt his feelings. I will say though that, overpromised and underdelivering as Homefront proved, I did genuinely enjoy my time with the game. The core shooting was fine and the Multiplayer’s been one of… Read more »

It could be a game mode called “breaking new ground”.

32 people standing in one spot would probably break some ground. Maybe that’s what they meant.

As stated, the quote would lead someone to believe that 32 people playing is somehow groundbreaking, especially since “groundbreaking” and “32 player” are both emphasized in the quote. The emphasis and the fact that the statement is there at all means they’re trying to sell it as groundbreaking, when is absolutely is not.

I won’t argue that calling their multiplayer “Groundbreaking” is marketing buzzwording at its worst. However, I feel like you’re complaining about the wrong thing. That sentence doesn’t state that the fact that 32 people can play at once is groundbreaking. It simply claims that their multiplayer is groundbreaking (in an unspecified way) and factually states that it is for 32 players. It’s the same thing as saying “Incredible 4 person dining set”. The claim of it being incredible is not based on the number of people who use it.