Yes, You're Reading that Right 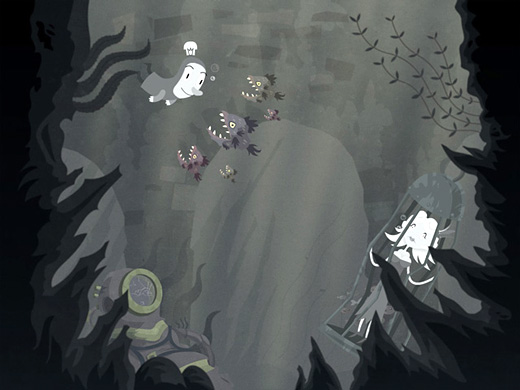 HIGH: Perfectly bizarre in every way.

WTF: Laertes is wearing a helmet like the one from Full Metal Jacket.

When one thinks of Hamlet, a game adaptation probably isn't the first thing that comes to mind. The Shakespearean tragedy isn't exactly conducive to a game narrative. How to put something like that together is an interesting question—what would need to be glossed over or embellished in order to make it work? Time travel? Make Polonious an green alien? Give Cladius an electric guitar? Throw a giant whale in for good measure? Maybe some puzzles too?

Actually, that's exactly what was needed.

Hamlet puts a new twist on an old story in order to make a charming puzzle game. After accidentally landing his ship on Hamlet himself, a traveler from the future must take Hamlet's place in the old tale and save Ophelia from the clutches of the evil Claudius. OK, so it's not exactly a faithful representation, but who cares? The game revels in its oddness, giving it a special charm that elevates it above what is otherwise just a series of puzzles.

The conundrums are the heart of the game, and thankfully they are creative and challenging, although sometimes too much so. Some of the puzzles (even when considering their respective clues) were very difficult to solve. Despite taking into account the hint system that kicked in when I took too long to figure something out, I still have no idea how I was supposed to solve some of them. Granted, maybe it's just me being dumb and my puzzling skills just aren't what they used to be, but I honestly don't know how I was supposed to solve those particular segments without looking them up.

Still, I don't want to knock the puzzles too badly since most of them are very well done. The solutions are unique and often amusing, especially the "boss" puzzles. I say boss in quotation marks since they are really just puzzles that just happen to have a health bar associated with them. Still, figuring them out was very satisfying, and watching that health bar go all the way down once the solution was found was especially cool.

Hamlet puts a comedic spin on a story that is probably as ill-suited for a game as it can possibly be, and creates a successful puzzler that has its own distinct tune. I can't say I've ever seen anything quite like this, and I hope that there is a Romeo & Juliet game in the works as the game's ending implied. Rating: 7.5 out of 10.

Disclosures: This game was obtained via publisher and reviewed on the PC. Approximately 4 hours of play was devoted to completing the game once.

Parents: This game has not been rated by the ESRB at the time of this writing. Nothing for the kiddies to be scared of here.

Deaf & Hard of Hearing: None of the puzzles have any significant audio cues, but there are a some that are heavily color-based that colorblind players will likely have problems with.