All the Tactics Without the Zerg Rush 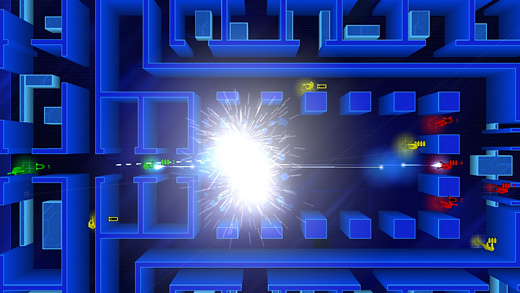 HIGH Wiping out half the enemy team in one turn.

LOW Trying to figure out if I'm in an enemy sniper's line of sight.

WTF Learning the hard way that I cannot fire a rocket launcher through a wall without it exploding.

While I enjoy the StarCrafts of the world, I am absolutely horrible at them. Real-time strategy rewards the quick-thinking player; the one who can process the most events at the same time. It's kind of like an extreme game of speed chess. Anyone that's had the displeasure of playing chess or poker with me will tell you that I am as quick as a turtle crawling uphill through molasses in a snowstorm. Turn-based strategy, on the other hand, is suited to deliberate and meticulous players that like to relish all possible strategies at their own pace. Thus the premise of Frozen Synapse, a turn-based strategy title from indie developer Mode 7, was immensely appealing to my turtle-like senses from the start.

Frozen Synapse is a very simple thing at its core. Each player gets a team of units with which to achieve the object of the game, which can be anything from eliminating the other team to freeing a set of hostage NPCs. On each turn the player makes his moves, then commits (or "Primes") them. A lot of thought must go into each move, concerning not just where I want my unit to go but which direction I want it to face, whether or not I want to engage the enemy on sight, and so forth. Once both players commit, the outcome is processed and displayed.

The rush of anticipation after the Prime button is pressed is a gleeful thrill, since almost every turn can drastically alter the outcome of a match. Frozen Synapse is easy to play and hard to master, attaining that elusive sweet spot between challenge and ease of access. The game also does a very good job of initiating new players, as the campaign and tutorial modes explain the combat mechanics and unit types in precise detail. When I finally began multiplayer I was more than prepared, and never felt overwhelmed or inexperienced.

That accessibility is a good thing, since playing against the AI in the lengthy campaign mode becomes far too predictable after a few matches. No, the bulk of Frozen Synapse's value lies in multiplayer, and it's here where the game truly shines. Trying to predict what my human opponent is going to next is a devious challenge and the simultaneous turn setup results in a rush of anticipation whenever the "Prime" button is pressed. There is a staggering amount of depth associated with each move when trying to take into account the actions of the other player, especially in the "Dark" game modes where enemies are not visible unless they are in a friendly unit's line of sight.

On top of all that, Frozen Synapse features a superb interface and matchmaking system. Finding any kind of game I want is extremely easy, and within minutes of signing into a server I usually receive one or two challenges from random users. I have noticed a bit of a problem with random players challenging me to a game and then bailing out almost immediately, but the annoyance is greatly reduced by the ease with which I can start up another game, or even take part in simultaneous games.

Frozen Synapse is also noteworthy from an artistic standpoint. The Tron-­style visual atmosphere took me in almost immediately, but the biggest factor in the game's distinct feel is the excellent soundtrack. The smooth, relaxing trance tracks are perfectly suited to the deliberate nature of the game. I even bought the version that came with the soundtrack, as the music is absolutely fantastic for relaxing after a stressful work day. All that said, I found myself wishing that the game world had a bit more personality to it beyond the music, as the universally blue rooms and the little green forms I was constantly presented with became just a little less cool each time I saw them.

Frozen Synapse is almost everything it needs to be. It's deep, accessible, stylish, and it has a great matchmaking system. It takes a very simple, familiar concept and wraps it in an elegant new package for all to enjoy. I was hooked from the beginning, and the easy-to-use online system kept me coming back for more. It's a fantastic way to scratch the strategy itch, and a damned relaxing one to boot. Rating: 8.0 out of 10.

Disclosures: This game was obtained via Steam download and reviewed on the PC. Approximately 1 hour of play was devoted to single-player modes and 5 hours of play in multiplayer modes.

Parents: At the time of this writing, this game has not been rated by the ESRB. While there is a fair amount of blood splatter when a unit is killed. I wouldn't have a problem with letting a teenager play this. I'd be hesitant with younger ones though.

Deaf & Hard of Hearing: There are very few spoken lines, and while they aren't subtitled they aren't relevant to gameplay. All in-game dialogue is text only.

I said it before and I will say it again: if you have ANY interest in tactics games you HAVE TO try Frozen Synapse. It’s really, really good and I’d love to see what Mode 7 would come up with if they would have the at least a fraction of the money that e.g. Blizzard pumped into Starcraft 2.

Nice, wasn’t expecting a review for this on here. It’s a shame cause strategy games have been really strong over the past few years. In fact, I’d say Shogun 2: Total War is game of the year so far this year, yet there’s no review for it on here! Nor for Civilization V. Sad face.