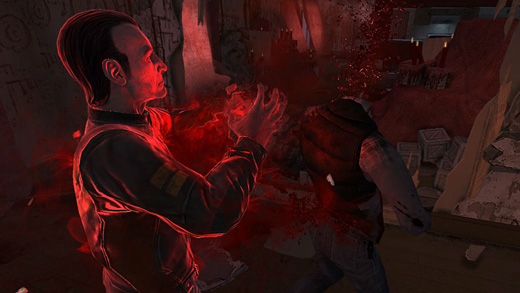 HIGH: Fighting over bodies to possess in Soul King.

LOW: Being given a mech suit in a game where I am supposed to be frightened.

WTF: In this world, ghosts can be shot, have sex, and become pregnant. M'kay.

Horror can be a fleeting thing in games. It takes a very finely crafted atmosphere to truly terrify a player on a consistent basis, as things must be meticulously designed to take full advantage of the human psyche. Very few games accomplish this, often instead relying on cheap thrills and sudden shocks in order to justify the horror label. F.E.A.R. 3

, the latest entry in the F.E.A.R. franchise, is a textbook example of the "fake" horror game. While there are several moments that are intended to make me feel afraid, none of it works since the game does so many things that completely undermine what its name implies.

F.E.A.R. 3 picks up where the original F.E.A.R. left off: in the aftermath of the destruction of a secret project to create psychic super soldiers. Main character Point Man is being interrogated by the enemy. The main antagonist from F.E.A.R, Paxton Fettel, appears in his ghost form and rescues him. The established backstory is actually decent, and well-suited to a horror game. However, the game doesn't do much to introduce new players to the world (I had to look things up myself) so there was a good deal of confusion about some of the specifics.

Point Man has the standard FPS assortment of abilities along with his trademark bullet-time powers, while Paxton has several psychic powers and the ability to possess enemy soldiers. The two form an uneasy partnership, setting the stage for the game's co-op mode, but the mere idea of co-op play in a game meant to frighten the player is bizarre, since being able to look over and see my ghost buddy dashes all sense of isolation. Worse, after taking the elimination of being scared out of the equation, F.E.A.R. 3 is a co-op experiences that gains absolutely nothing from having the second player.

Any initial gameplay differences between the two characters evaporate quickly, since as soon as Fettel grabs an enemy soldier, he becomes identical to Point Man (minus the bullet time powers.) His ghostly bodysnatching mechanic is a neat thrill at first, but its novelty is short-lived. Honestly, I might as well have been playing with the AI, since it never felt like my flesh-and-blood companion and I were working together in any real way. Instead of actually having to cooperate, it was more like two acquaintances that ran into each other at the gym—we're both doing the same thing, but not together. I could probably get into a co-op horror experience if said experience was designed to let both players share in the terror and play in tandem, but the true failure of F.E.A.R. 3 is that it doesn't seem to understand what its title means minus the superfluous number. 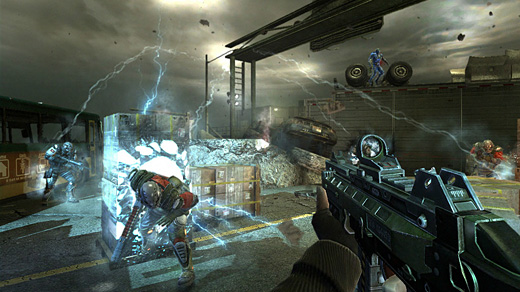 Point Man and Paxton Fettel are very powerful. They both have a multitude of strong weapons/abilities at their disposal, thus making it practically impossible to be truly afraid while playing as them. No matter what creepy screen flashes or blood splatters I ran into, my powerful character meant I myself never felt threatened. While there were plenty of real threats in terms of their ability to kill me, none of them felt like threats.

The absolute worst moment in the game for me was when I was given a near-invincible mech suit and allowed to mow down enemy soldiers while running through a house. I felt powerful during this segment (as I did throughout most of the game), the exact opposite of what I should be feeling. The rest of the campaign never alleviates this, instead falling back into the generic FPS mold and desperately trying to live up to its title with some predictable shock events. A sense of danger is the most central aspect of any horror gaming experience, and it's an area where F.E.A.R. 3 fails miserably.

Outside of the campaign mode, the multiplayer offerings are intriguing, especially Soul King. Playing as a body-hopping spectre and fighting other body-hopping spectres was the most fun I had with the entire game, and it felt like the devs were really onto something with this mode. Sadly, I had an extremely difficult time getting into matches, as the game browser would almost always return a "no games found" message. I was able to start some matches by hosting them myself, but even then I was waiting upwards of 20 minutes for a full party to join. Whether this is a indication of the game-matching system being broken or a simple lack of players I can't say, but nevertheless it was disappointing to see my favorite part of the game be so cumbersome.

Given the thematic problems in the campaign and the difficulty of finding/creating matches in multiplayer, one has to wonder whether it would have been a more worthwhile venture to ditch one mode and focus on polishing up the other. I could see the campaign becoming good if more care were given to dialing back the player's power and enhancing the actual fear factor, and with a better interface and matching system, the multiplayer could have been quite enjoyable.

is a prime example of a game that can't decide what it wants to be. In trying to be an intense horror campaign and an intricate co-op/multiplayer experience at the same time, it winds up being neither and pleasing no one. I see some good ideas in the story and multiplayer modes, but a distinct lack of focus brings it all down. Rating: 4.5 out of 10.


Disclosures: This game was obtained via publisher and reviewed on the Xbox 360. Approximately 7 hours of play was devoted to single-player modes (completed 1 time) and 3 hours of play in multiplayer modes.

Parents: According to the ESRB, this game contains blood and gore, intense violence, partial nudity, and strong language. There's lots of cursing and bloody corpses flying about, not to mention a few scary looking monsters. While it isn't the horror experience it wants to be, it's still a no-no for kids.

Deaf & Hard of Hearing: Spoken lines are all subtitled, but things like enemies shouting and music changes are used to indicate when a group of enemies has been cleared out. Not having these indicators could be problematic.

Honestly man, I understand what you’re saying but look at Fear 1 & 2. They’re horror games, sure, but they aren’t made to be exclusively horror. There are horror SEGMENTS, but there are also intense action segments. The mech didn’t throw me off, or detract from the horror segments, because at that point I wasn’t supposed to be afraid I was supposed to be unleashing wholesale death upon an army of clone soldiers. The game itself is more horror-action than straight up horror, and as such I found the mech fit in fine with the action component. I haven’t played… Read more »

And those mech suits also undermine any feelings of fear. Which is a shame, because there are many scenarios where being in an invincible suit could still result in fear. A player could be infected by alma while in the suit, lose control of the suit and watch as it attacks the co-op partner until the player can regain control. Or the suit itself can be a trap, harming the player once entered. Or there could be environmental effects that only harm the player when in the suit. It’s always odd when games get horror wrong, or think that it… Read more »