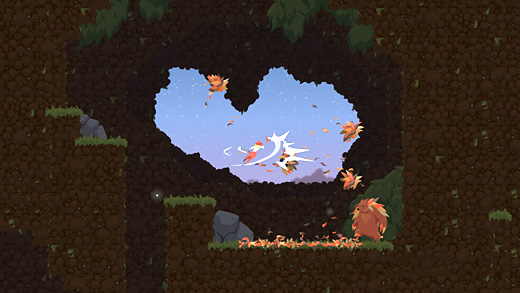 HIGH Flying through platforms without stopping and getting every dust piece.

WTF Why are level endpoints so inconspicuous?

A time trial-based platformer following a cadre of ninja janitors that fight dirt monsters by hitting them with brooms…  It sounds like a great idea, right? Dustforce, the first effort from developer Hitbox Team, attempts to fill this gap in gaming with their slick 2D platformer, and for the most part it does this successfully.

Dustforce entails running through a given level, sweeping up dust on the floors, and dealing with any monsters the dust may have spawned. The ninjanitors control very smoothly, and dashing up walls while smiting massive dust bunnies can be performed with ease. It feels much like a 2D version of Prince of Persia: Sands of Time (which is ironic since Prince of Persia itself began life as a 2D platformer) and conveys a delightful sense of effortless athleticism. That feeling is about all that's effortless in Dustforce, as the game is often brutal—but in a good way.

Dustforce is hard. One simply can't breeze through this game on the first try. While completing the initial levels is easy enough, opening the later ones requires getting an S-Ranking (a near perfect run) in earlier levels, making mastery of the game a requirement for progression. Getting an S-Rank requires a lot of practice and skill. Fortunately it's clear that a lot of work went into making the controls smooth enough to make the difficulty acceptable, as a game like this would crash hard without solid mechanics. However, beyond the mechanical successes Dustforce does have several annoying quirks.

First, there is no exposition whatsoever. None. I started as the primary janitor character, but after that the game wished me good luck (I think) and sent me on my merry way. While a deep background narrative is by no means necessary for this kind of game, it still would have been nice to have just the littlest bit of explanation as to why I'm doing what I'm doing.

There were also times when a level would end before I realized it. At the end of each level there are usually some enemies that, when defeated, trigger the stage clear screen. These enemies are exactly the same as the normal enemies encountered throughout the level, so I would kill them thinking I would still be able to go back and get any dust tracks I may have missed. While this isn't a major problem (very rarely will one have a reasonable chance at S-Ranking a level on the first try) some sort of "level will end" warning would have been nice.

Dustforce also has a pretty robust multiplayer mode with several different options, but I wasn't able to try it out since the game is not network-capable. This seems like a big misstep, as playing competitively/cooperatively with others seems like it would have been fun, but without the internet I don't have anyone to play it with.

While it doesn't approach the level of awesomeness that the concept of ninja janitors killing dust monsters might suggest, Dustforce is nevertheless an enjoyable, challenging romp. It's just a shame that the glaring omission of online multiplayer keeps it from reaching its full potential, while the steep difficulty of earning S-ranks might put off those looking for something that requires a little less effort. Rating: 7.0 out of 10.


Disclosures: This game was obtained via publisher and reviewed on the PC. Approximately 2 hours of play was devoted to single-player modes (completed 1 time, though I did not S-Rank all of the levels) and no hours of play in multiplayer modes.

Parents: At the time of this writing, this game has not been rated by the ESRB. It might be too frustrating for smaller children, but content-wise there's nothing to worry about.

Deaf & Hard of Hearing: There are no spoken lines and audio isn't a significant factor. You should be fine.