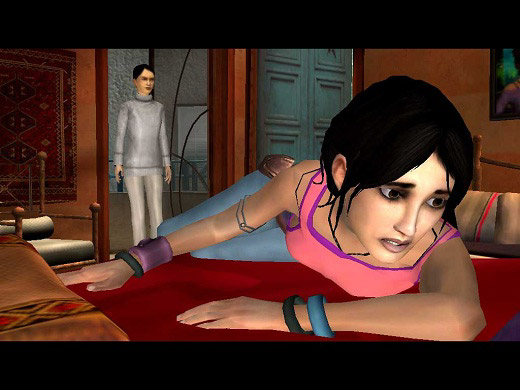 Recently I began playing Dreamfall: The Longest Journey, the sequel to the adventure classic The Longest Journey. My expectations were oh so high, after the original's blend of fantasy, sci-fi, and wonderful characterizations made it instantly climb onto my all-time favorites list. My reaction upon seeing about 45 minutes worth of Dreamfall was similar to one who may have just come home to see his dog ripping apart the giant K'Nex roller coaster/burger stand/space station he spent so much time building-who is this monster, and what did they do the my masterpiece?

The controls in Dreamfall suck. Hard. I wish there was a less blunt way I could say that, but it really wouldn't do it justice. Instead of the "click on things to pick them up, then click on other things to use them" system that worked so well in the original and in countless other adventure games there is now an awkward WASD moving scheme where the mouse controls the camera. The idea that I couldn't click on individual objects was very perplexing. It almost felt like I was using analog sticks.

Which in fact I was, in a sense.

Eventually it became clear that the controls were designed around the original Xbox controller, and the keyboard and mouse took the place of the left and right analog sticks respectively. Now, I could be wrong, but "point and click" adventure games are called such because I can point and click on things. This setup felt more like, I don't know, rotate and fondle? Spin and grope? Gyrate and caress? The point is that whatever sexual innuendo I can slap on it, it doesn't work. I could talk some more about what I like and don't like about Dreamfall, but that isn't the point here.

Over time, I've noticed certain kinds of games just don't work on certain platforms. Adventure games are the first one to come to mind, since they don't get along well with a traditional controller. Like I said, "point and click" got its name for a reason. The same thing goes for many western RPGs, as evidenced by the stark contrast between the console and PC versions of Dragon Age: Origins. When faced with interacting with so many intricate pieces of the environment, the ability to simply point to what I want far outweighs any sort of cycle-through functionality provided by a controller.

RTS is another genre that seems far more at home with a mouse. While I haven't dabbled much in RTSs since the heyday of Warcraft III (the days before Blizzard discovered the infinite money cheat that is World of Warcraft), I spent enough time with the N64 version of StarCraft to know to stay away. Again, just pointing at what I want is essential when there are so many little things I have to interact with. 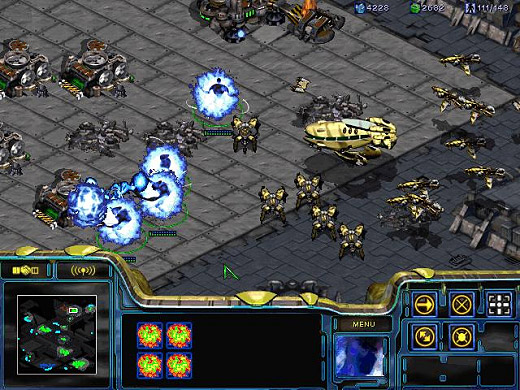 That's not to say that a mouse is always superior. Aquaria, for example, allows for both mouse/keyboard and controller input, but for the most part I found myself sticking with the controller except for a few matters of convenience. The controller feels more suited to freeform movements, such as running, jumping and flying. The controller also seems more natural when I need to perform maneuvers like swinging a sword. So in essence a controller is superior for imprecise (sorry, can't really think of a better word for it) movements like those associated with platformers or other action games.

I can't say I've ever encountered a game that has broken any of these rules aside from first-person shooters, although even then the difference between a controller and a mouse is like night and day for me, but it's supremely possible that I'm overlooking something. Feel free to inform me if I am.

yeah, the movement is much smother on PC, but I have gotten so use to analog sticks that anything else just feels weird to me (even d-pad).

I’m exactly the opposite. In FPSs I’m much more at home with a mouse/keyboard. Turning with the mouse is a lot easier for me, and lateral movement (left analog stick/WASD keys) is much simpler with the keyboard. I tried playing the Xbox version of Left 4 Dead once and it was like moving through mud. I had to turn the look sensitivity waaaay down just to make sure I didn’t turn past everything too quickly, and even then I just couldn’t get used to it.

To each their own I suppose.

I wouldn’t say that FPS breaks the rules, but just slightly bends them. I say this because FPS’s better suited for controllers by far. While a mouse is the superior shooting tool, the keyboard is one of the worst gaming controllers ever made (IMPO). Today’s FPS games require a lot more than just point and shoot. They often require quick reflexes and sudden movements better suited for analog sticks rather than keys on a keyboard. Rail shooters that require nothing but point and shoot are perfect for a PC, but IMO a quality FPS only feels right with a controller.

Don’t get me wrong, the story and such have been great so far, and the game looks great, but the mechanical flaws are so glaring that it’s pretty hard to ignore. Also, I haven’t finished the game yet so please refrain from any more detailed descriptions 🙂

I was thinking the same thing, Rob.

For instance, I’m still playing Dragon Age on the PS3 and although I know I’m missing the fluid tactics of the PC version, it doesn’t distract me from the important things: plot, character interaction and exploration. I can get over lousy gameplay if a title has personality (one that matches my taste, of course).

I played Dreamfall on PC with a wireless dual stick controller and found it pretty painless. Combat was definitely fugly. Dodge, strafe, punch, repeat (I got the feeling that someone in an office kept saying ‘you need more action scenes like in other games’)…

My love of the story generally overrode my criticism of the gameplay, except for some really counterintuitive situations.
(Took me forever to figure out to hide from the behemoth in the labyrinth in the April Ryan section)