This is not the Witch you're Looking for 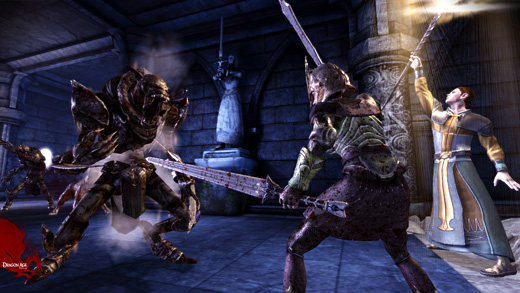 HIGH: Getting to make the choice I've wanted to make since Origins.

LOW: Enemies that float in midair after I kill them.

WTF: Why could this not have been part of Awakening, at the very least?

The downloadable content (DLC) for Bioware's masterful Dragon Age: Origins has been decidedly lackluster so far. I personally enjoyed Awakening a bit more than many others did, but the rest has been useless crap that I didn't find at all interesting—and even Awakening wasn't what it could have been thanks to a woefully short play time. Enter Witch Hunt, the small, $7 add-on that promises to bring closure concerning the saga of Dragon Age's most enigmatic character, Morrigan. However, closure is the absolute furthest thing from what Witch Hunt provides.

How much the player gets out of Witch Hunt (if anything at all) is totally dependent on how much that player cared about Morrigan in the first place. Even then, its maximum impact can only be felt if a very specific set of choices were made in Origins. As for my character, I did make those choices, so I got the full effect of the confrontation between the Warden and Morrigan, plus the obvious lead-in to the upcoming Dragon Age 2. Indeed, being intentionally left in the dark regarding some things was expected with a sequel right around the corner. However, I can see how what was meaningful for me would be worthless to others who didn't follow the same path. This greatly cheapens Witch Hunt's worth as stand-alone DLC.

A couple of new characters? Bah. Reunion with Dog? Psh. Visiting some familiar locations from Origins? Please. Witch Hunt is about one thing and one thing only—getting to see Morrigan again. It is this brevity that begs the question—why couldn't this have been part of Origins, or even Awakening? It's literally two extra hours with about six minutes of Morrigan at the end. It feels like it should have been a side quest in a larger adventure.

Witch Hunt did let me make the choice I wanted to make at the end (which was gratifying) but it doesn't do nearly enough to be able to stand on its own—even as an add-on. Indeed, it represents the fundamental problem with the concept of DLC in a game like Dragon Age: if it had been part of Origins or Awakening it would have been much stronger and had much more impact. As it stands now, it's an empty experience punctuated by a few extra minutes of Claudia Black's voice acting and a big tease for an upcoming game. No thanks. Rating: 2.0 out of 10.

Disclosures: This game was obtained via download purchase and reviewed on the PC. Approximately 2 hours of play was devoted to completing the game once on normal difficulty.

Parents: According to the ESRB, this game contains blood, intense violence, language, partial nudity, and sexual content. Although there isn't really much going on, the same rules apply here as they did in the full game. No kiddies.

Deaf & Hard of Hearing: You'll be fine. All spoken lines have subtitles and there's aren't any audio-centric segments.