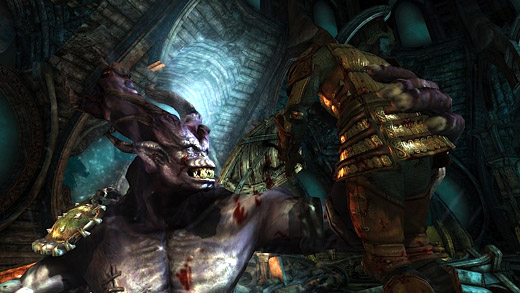 HIGH This is a very serious breach of protocol, but I have two: 1) Watching my companions change from fantasy archetypes into actual characters. 2) Glyph of Repulsion + Inferno + a doorway = awesome.

LOW The sheer amount of useless crap that I'm presented with while looting. (NOTE: This has been relieved somewhat by a recent update.)

First off, let me say that Brad's review is (probably, since I haven't played it) entirely accurate as far as the console version goes. After watching several of the videos of the combat system for the Xbox version, it's clear that it's less than their best. This comes as no surprise to me—I've always felt that a point-and-click interface was superior to a controller in most RPGs, especially those in the BioWare family. So instead of reading this as a refutation of anything in the original review, take it as a confirmation of the PC version's superiority, and as a statement of why Dragon Age: Origins is, to date, the crown jewel of BioWare's brand.

Dragon Age follows in the formula set by its predecessors—the player creates a character, gathers companions, and goes forth to defeat whatever unspeakable evil has decided to conjure itself. The path is a familiar one now, but looking back on many of Dragon Age's predecessors it's remarkable to see how things have evolved. For instance, the karma meter, a staple of classics like Neverwinter Nights and Knights of the Old Republic, is gone now, and is replaced only in spirit by your companions' reactions to certain choices. The decisions you make will often reside in a massive moral grey area, similar to the The Witcher, if not as expansive or morally ambiguous.

The depth of characterization has improved drastically over the years, and Dragon Age manages to create connections with the player like never before. In most other similar games, there are usually a few characters among your party that really stand out, while the rest are just also-rans. For every Wrex a Tali, for every Celes a Setzer, and so on. Not so in Dragon Age. There are no throwaways in the party, no also-rans. Everyone has some kind of redeeming value, be it in depth or pure amusement. This is the only time I can remember where I felt some sort of attachment to every party member, with nobody eliciting the "this guy kind of sucks" reaction. The companions are great about interacting with one another as well, as the ambient dialog between them is both revealing and amusing, often at the same time. This is something that I felt was missing in Mass Effect, and its inclusion was a very welcome addition. 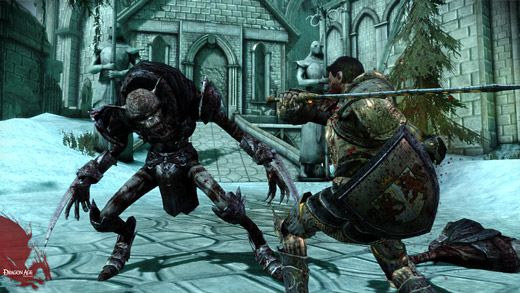 The way relationships are handled have also been drastically improved, having been elevated from a long side quest to a massive exploration of character that can have a huge impact on the rest of the game. In every other similar title where I had the option to be romantically involved with companions, the process of doing so consisted of me asking them to have sex with me about a hundred or so times, bedding them, and getting some kind of achievement and maybe a little reward for it. Everything amounted to little more than a side quest with some pixelated boobies and maybe a slightly different ending. Dragon Age's romance subplots allowed me to see the character change in front of me, adapting to my influence depending on the dialog options I chose. As any of the romance trees progress, the companion in question will start acting a little different, but only around the player—to everyone else they're as nice or mean as they always were. Eventually I was able to see wholesale changes in them, like renouncing a core belief/philosophy, or slowly breaking out of an emotional shell.

The PC version's combat system is solid enough, if a little unbalanced. Magic is by far the best weapon in the game against just about everything, and going into combat without a mage in the party is a surefire way to get a battle axe lodged in your face. While all classes are have their uses, the greatest satisfaction came from playing as a mage. Warriors and rouges are essential in combat and their abilities are useful enough, but nothing quite beats trapping a horde of enemies in a room and then summoning a 20-foot tall tornado of fire to roast them while they hopelessly try to get out. Other spell combos are just as satisfactory, like freezing a line of enemies and watching my melee attackers shatter them to pieces. As I said, the other classes are certainly worthwhile, and there are several mage companions to use if I want to play as something else. However, melee combat just isn't as thrilling, as BioWare has never quite topped the system they came up with in Jade Empire.

The battles themselves, again in contrast to the console version, proved to be enthralling as well. Some of the fights can prove extremely difficult, so choosing my targets and powers to use on them carefully came into play quite a bit. There was more than one occasion where I chickened out and simply lowered the difficulty level, which is mercifully available at any time through the options menu. Whatever problems the console version might have in this area, I can safely say they aren't present in the PC version. A mouse and keyboard are far better suited to this kind of setup than a controller, since the ability to click on party members/enemies/items/whatever is still the best and most intuitive way to interact with a game world such as this one.

It's very easy to write off Dragon Age as yet another fantasy RPG trying to siphon off what originality remains in the creations of J.R.R. Tolkien, and for the first few hours it certainly feels that way. But once I met my companions and the massive world of Ferelden began to show its true colors, it became clear that Dragon Age is without peer within its genre. As Brad said, nobody does this kind of game better than BioWare, and with Dragon Age they topped even themselves. After creating a wonderful universe full of plot intrigue and interesting dynamics in Mass Effect, BioWare did it again in a totally different setting with a brand new cast. And here I was thinking I was going to have to wait until Mass Effect 2 for something to outdo the original. I was wrong, and I'm very glad that I was. Rating: 10 out of 10.

Disclosures: The game was obtained via Steam purchase and downloaded and reviewed on the PC. Approximately 85 hours was spent on one and a half playthroughs on (mostly) normal difficulty.

You summed it up perfectly. We try to emphasize personal experience (i.e., “I” in most cases rather than “you”) and it’s something that originally drew me to the site way back when.

Also, I imagine my view on the game would be vastly different if I had played the console version, as the numerous problems would have no doubt dampened my enthusiasm quite a bit. However, in its PC form this was an absolute knockout.

[quote=Crofto]For a start, as ever with BioWare, the game lacks polish to the highest degree. The game is absolutely littered with glitches big and small, and there have been countless times where I’ve had to sigh at something going wrong or not working as its supposed to (such as poor team-AI not performing the tactics I selected). Furthermore, while I don’t take issue with the visuals as they (unlike most people who think the game looks dated) the performance is less than impressive; I see texture build often and the overall display isn’t exactly solid.[/quote] I honestly didn’t encounter any… Read more »

[quote=Crofto]a sign that the reviewer is rating the game based on their own novelty and enjoyment, and not overall gaming design (which is more important).[/quote] I do agree with what you are saying about Dragon Age being no more than an 8/10 (and i’ve only played the PS3 version. I do however disagree with the above statement. A games review is ALL about an individual’s experience with a game. If you review it any other way it is just adhering to a set of standards that every reviewer in magazines and across the internet must abide by, and if we… Read more »

A 10/10 seems awfully generous, especially considering the usual review-process with this website. While I admit that the PC version of Dragon Age is massively superior to the console versions, and that the game itself is finally a sign that Bio-Ware can still make games like KotOR (which is still, by far, their best game), I don’t see quality that could warrant such high praise. For a start, as ever with BioWare, the game lacks polish to the highest degree. The game is absolutely littered with glitches big and small, and there have been countless times where I’ve had to… Read more »