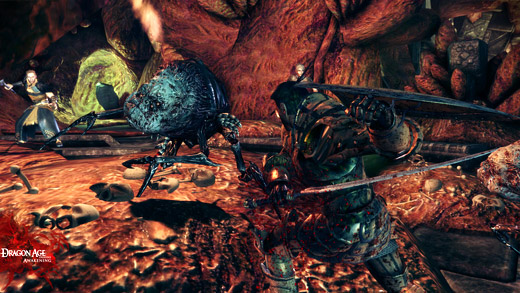 LOW: The fact that it was all over at 16 hours.

WTF: Nobody seems to recognize me as an elf now. Even other elves.

The first expansion to last year's RPG masterwork Dragon Age: Origins, Awakening has the unenviable task of trying to make better something that was already great. Granted, the burden placed on Awakening is considerably smaller than if it was a full sequel, but with a $40 price tag it needs to be something more than a few new places to visit and some new items. Ultimately Awakening succeeds in being everything an expansion is expected to be, for better or for worse.

Things start six months after the events in Origins, with the player being tasked with rebuilding the Grey Warden order. An Origins character can be imported into Awakening or the player can choose to start a shiny, brand new warden. While most of the items I had in Origins transferred over without a problem, things I got from DLC (like Avernus's robes or the Warden Commander armor) do not. This wasn't particularly a problem for me as my main character was a mage, but I know others who began the game with no weapons because of this and essentially had to play most of the opening mission unarmed. The idea that we paid for these items just to see them be taken away for expansions is a tad irksome, along with the idea that I can't play the choices I made in Origins if my character died.

Still, once things get going Dragon Age works its magic (pun intended) just like in the old days of 2009. There are quite a few new powers and specializations to be found, and some of the new mage abilities (like Repulsion Field) were very welcome. Combat is identical to Origins, so PC players will get the same smooth experience, while console players will probably be disappointed yet again.

The main storyline concerning self-aware darkspawn is a good one, so no fears on that front. Awakening explores something that I was wondering about in the original as well—the idea of thinking, rational darkspawn as opposed to simple monsters. Obviously I'm not going to spoil anything, but the arc revolving around the darkspawn and their newfound motivations kept me intrigued throughout the game. Unfortunately, it didn't have to do so for that long.

Awakening is quite short, as I clocked in at about 16 hours total. This pales in comparison to the 80 or so hours I put in on my first Origins playthrough, and because of this a lot of the best aspects from Origins feel very watered-down. The new cast of characters I'm presented with has just as much potential as the original bunch did, but sadly I didn't get to see much from them due to the length, sapping Awakening of what was Origins's greatest strength. The city of Amaranthine feels much smaller and more confined than Denerim did, and while I understand that Amaranthine isn't supposed to be as grand as Ferelden's capital, the lack of a hustling hub city was really glaring.

I think it's safe to say that the cliché expression is true—players that enjoyed Origins will enjoy this as well, and future returns to Thedas will definitely be welcome. However, when it's all said and done I couldn't help but feel that the immersion was a little thin due to the relatively small amount of content. I didn't get to know the cast as much as I would've liked, and the story, while good, probably could have benefited from some more substance. I'm certainly satisfied with the experience, but at $40 I'd expect some more meat on the bones. Rating: 7.5 out of 10.

Disclosures: This game was obtained via retail download and reviewed on the PC. Approximately 16 hours of play was devoted to completing the game once.

Parents: This game has been rated M by the ESRB. The same rules apply here as they did in the original—no kiddies.

Deaf & Hard of Hearing: All spoken lines are subtitles and there are no significant audio cues.