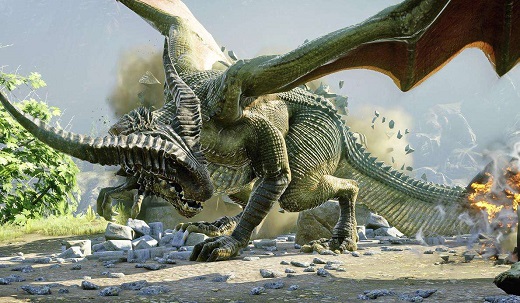 LOW: The persistent feeling that I had accidentally launched World of Warcraft

WTF: It sure is convenient that we found this giant castle with nobody living in it

Bioware games have settled into a consistent pattern over the past decade or so:

Step 1: Allow the player to create their own character.

Step 3: Create iffy game mechanics that may (or may not) work well.

Dragon Age: Inquisition follows this formula to a tee, and the result is both one of Bioware's most enjoyable and most maddening games.

Things get off to a muddled start. The player's character has mysteriously acquired a green mark on their left hand, the result of an explosion of unknown origins. After being initially blamed for the explosion, I was put in charge of the Inquisition (who, me?) and then dumped into a massive zone with about a zillion quest markers and told to get cracking on tasks for the cause.

What is the Inquisition? At that point, I had no idea.

However, the most galling thing about those first ten hours was that it was entirely unnecessary. It's possible to do everything required to advance the story within two hours, which would have been preferable to wandering around the Hinterlands without any real sense of what I was supposed to be doing. Nowhere in all the quest markers was it apparent that I could leave at any time.

This poor beginning was particularly disappointing since Origins and even Dragon Age 2 featured strong starts that gave the player a solid foundation and illustrated their place in the world. Inquisition, on the other hand, was content to toss me in with little explanation, resulting in an incredibly terrible impression. As such, the best possible advice I could give to anyone about to start Inquisition is this: Leave. The. Hinterlands. As. Soon. As. Possible.

Fortunately, things don't remain so sketchy once the player moves on. "It gets better later" might not be a pleasant thing to hear, but it does get better—the characters get deeper, the story begins to have meaning, and the player's role becomes clearer. The pacing picked up as I kept progressing further, eventually becoming as enthralling as any of Bioware's best work. By the time I reached Skyhold, the Inquisition finally felt like it was mine.

In addition to the improving pace, Thedas lore experts will be in for a treat, as Inquisition feels like the most expansive in-game look at the greater Dragon Age universe to date. The narrative is heavily tied to past events, and there are small references and callbacks throughout. While lore knowledge is by no means a requirement, it definitely enhances the experience.

Of course it wouldn't be a Bioware game without a rich cast of companions, and Inquisition features some of the best the Dragon Age franchise has produced. Even the characters who might seem like total dullards at first have something going on beneath the surface, and trust me, it's worth seeking out the hidden aspects of the entire party. There are some truly great character moments to be found, and those alone make Inquisition worthwhile.

Unfortunately, the high points are few and far between. 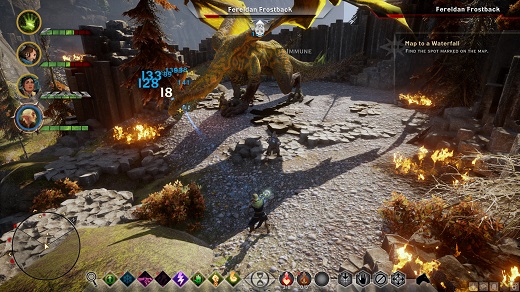 In contrast to the earlier titles, the exploration zones here are absolutely massive. Each area is about as big as the entirety of Dragon Age 2, with an open vastness to them similar to Skyrim or the recent Fallout games. The environments are gorgeous, ranging from lush forests to sand-swept deserts and opulent palaces. The criticisms of Dragon Age 2's confined spaces and repeated environments have been very much addressed.

Unfortunately, the size of these areas is also Inquisition's greatest problem. The majority of the quests in these areas are of the "go here and get this" variety, which offer little in the way of interesting story or character bits. In fact, the overall structure of these areas feels very much like an MMORPG, and not in a good way. Inquisition seems big for the sake of being big, stuffed with fetchquest after fetchquest solely for the purpose of increasing gameplay length.

In addition, progressing through the critical path requires "power" points, a resource that is gained by accomplishing these fetchquests. This results in sizable gaps of time between any meaningful story sequences, with a dull, grind-heavy experience filling that space.

On the plus side, combat and exploration are solid enough, so the time spent between story missions wasn't so bad as to be unbearable. Fighting enemies recalls some of the most memorable battles from Origins and has none of the randomness that made Dragon Age 2 so hard to deal with. While the inclusion of an overhead camera wasn't all that useful to me, the smooth ‘command, pause, move, pause, command' flow of battle is still intact.

Dragon Age: Inquisition is a frustrating game. I often found myself scratching and clawing through boring, MMO-like content for enough power points to progress to the next major plot event. However, the fact that I was willing to slog through it at all shows just how good this game can be when it hits its stride. The dichotomy between the narrative parts and all that shoddy fetchquesting is a shame because when it hits those high notes, Inquisition is an absolutely beautiful experience. Rating: 6.5 out of 10


Disclosures: This game was obtained via publisher and reviewed on the PC. Approximately 45 hours of play was devoted to single-player modes (completed 1 time) and 1 hour of play in multiplayer modes.

Parents: According to the ESRB, this game contains blood, intense violence, nudity, sexual content, strong language. The content descriptors are pretty self-explanatory, but nothing felt over the top or inappropriate. It's not something I would have a problem with an older child playing.

Deaf & Hard of Hearing: There shouldn't be much trouble. Everything can be subtitled and audio cues aren't a significant gameplay factor.

Thanks for this balanced review. I just finished the game after spending slightly over 80 hours on it. (So much for my Christmas holiday!) I’m really torn in regards to Inquisition. I think it’ll take a long time before I really make up my mind. Unlike Mass Effect 2 or Baldur’s Gate 2, I’m not in an immediate mood to replay the game, since I don’t think it’ll make a big difference. But definitely a game that’ll stay with me for a while. Pluses: + Best graphics so far in the series. Beautiful areas, from the Storm Coast to the… Read more »

Reviews that point out how mindnumbingly boring the first hours of Dragon Age Inquisition can be are few and far between. There have been so many raving reviews that called DA:I essentially the second coming of Origins, but better, that I was really wondering if I accidentally bought the wrong game. What I was playing seemed some sort of reskinned Ubigame, perhaps WatchDogs Creed: Dragon Age Edition. It got me to rant “a bit” in the gamecritics forums: http://gamecriticsdotcom.wpcomstaging.com/forums/showthread.php?t=25827 I haven’t had that many technical issues and problems to get a game to just START since Metro 2033. Keyboard &… Read more »

I actually had no issue whatsoever with the controls. Everything was fairly intuitive, no input lag or anything like that. The tactical camera was a little unwieldy, but I just didn’t use it much.

Like you (and many others) I spent 10 hours in the Hinterlands. I spent another 10 hours and then gave up out of boredom. The greatest sin DAI commits is that there’s nothing new. It’s a bigger version of the first two games. That’s it. I also want to point out that the female characters got uglier and more boring with each new release.

So you played this on PC and you have no comments on the Keyboard and mouse controls? I am continuously amazed by the fact that no reviewer I’ve come across notices how bad (borderline unplayable) this game is with a Kb+mouse… In my 20 years of gaming this was the first game to give up because of those controls…

I played up until I got to Skyhold, maybe about 15-20 hours. By that point, I was so bored with the story (hint to EA/Bioware writers: NEVER give subplots the same weight as the main plot) that I watched a video on youtube to see if the payoff would be worth it. Then I traded in the game. That kind youtube soul saved me about 40-50 hours of my life, for which I’m eternally grateful. Thanks for the honest “non suck-up” review. It’s refreshing (and not because I agree with the final score you gave the game). On a final… Read more »

So it’s the games fault that you don’t realize what the inquisition is even though they tell you in like the 4th cutscene? You also aren’t put in charge of the inquisition until skyhold. The fact that you also didn’t realize the side stuff is unnecessary while like 95% of the player base did shows you lack the basic skills to play a game like this. It seems like you just skipped all the cutscenes and blew through stuff because your lack of knowledge in parts where they explain things in dialogue points to this like you not knowing was… Read more »

My , so far, only issues with the game, are two: The first one happens to be a big issue for me, the specializations have been drastically reduced, there´s only 3 now (vs 4 in DAO) and you can only choose one (vs 2 in both DAO and DA2), and on top of that, they are very limited in scope and only mimic what your followes already have, so, in my case, where i went with necromancer, Dorian is absolutley redundant in my party, why even bother having him on when he dos the same things i do? (To some… Read more »

Agreed. I think that the bad KB+M controls are are partly because the game was built for consoles and ported to PC. But it appears that most aspects of the interface/controls were poorly implemented on all platforms. For me the combat is the biggest disappointment. DA:O had tactical, party based combat with deep character development. DA:O combat is more like Kingdoms of Amalur or even Diablo. The tactical view is basically unusable. And the combat is so simplistic that there is no need for it anyway. The new potion system and removal of all other ways of healing is also… Read more »

“It’s a bigger version of the first two games”

Oh if only that was true…

A bigger DA:O with improved graphics and a new story, but the same controls and combat system was what I’d expected. To no avail. “Nothing new” actually looks nice compared to what we’ve got in reality.

I won’t deny that the game has a slow start or some of the MMO-style fetch quests can get tedious, but for most of them I find them strangely compelling, mainly because of how completing them brings power and influence that I can use to bolster my ranks. Those actually appeal to me more than simply getting a powerful new item. What really keeps it from feeling like a slog is just thinking about what new story elements I’ll access after completing them. My biggest frustration is probably the jumping mechanic. It made the devs decide to be sneaky by… Read more »