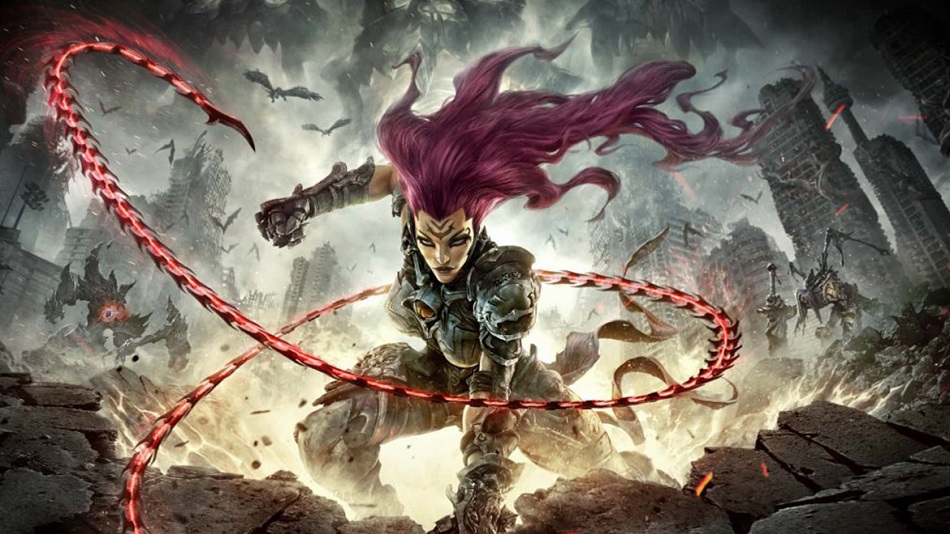 HIGH Landing a jump back/spear charge combo over and over

If nothing else, the Darksiders franchise has always been honest, gleefully ripping mechanics and systems from other games with no shame whatsoever. While this is not an unusual thing for games to do, doing so without understanding why those things work leads to the end product feeling hacked together. That’s why Darksiders I and II felt like less than the sum of their parts for me — they were pieces of countless other games blended into a tasteless sludge. However, Darksiders III course corrects to a certain extent and tones down the number of things it’s trying to emulate. The result is a more streamlined experience and the franchise’s best effort to date.

Fury, the sister of War and Death from the previous Darksiders titles, has been summoned to destroy the seven deadly sins and restore order to the post-apocalyptic human world. Frankly, the world, narrative, and protagonists of this IP have never been that interesting, and Fury’s journey is more or less the same as the others. There’s a lot of shouting, some treachery, and grandiose pre-battle speeches from the bosses. I will say that Darksiders III pokes fun at its own gameyness more than once (“why don’t you just give me all the power-ups now?”) and Cissy Jones’ voice performance as an incredulous Fury is perfect in these moments. While very little has changed in the Darksiders universe, the bits of self-awareness on display were appreciated. 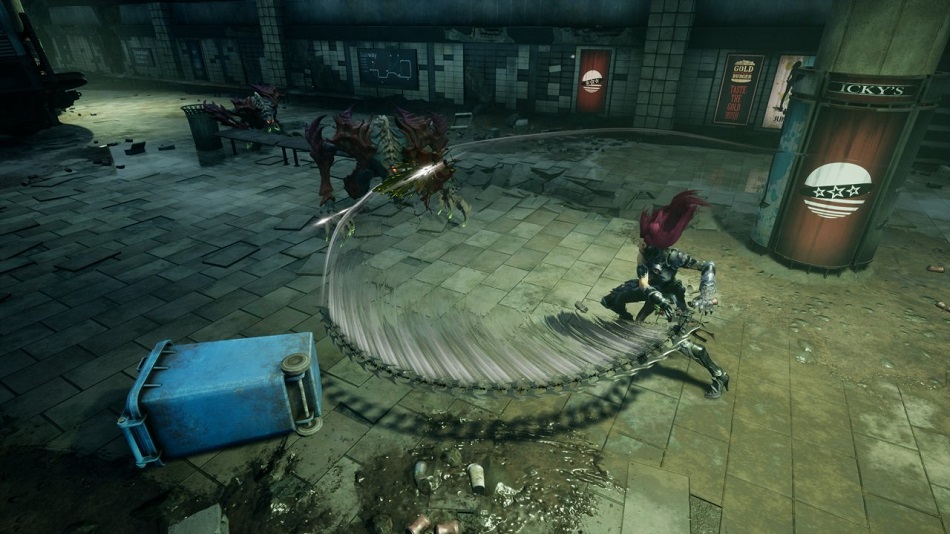 The series is generally known for its hack-and-slash combat, but it’s never been better than it is here. Fury’s moveset is fluid and engaging, allowing the player to get as creative as they choose when deciding how to approach an enemy. While it would have been nice to have some sort of reward for pulling off more complex combos (such as a Devil May Cry-type ‘style’ meter) I found myself mixing my attacks up on a regular basis just because I enjoyed doing so. In particular, Fury’s combat animations are fantastic, giving a real sense of heft and fluidity to each of her weapons.

However, the combat mechanics do feature some unnecessary complexity. Fury has two separate meters to keep track of, Havoc and Wrath. With a full Havoc bar, she can use a form that is essentially Devil May Cry’s devil trigger — she gains damage, durability, and healing. A full Wrath bar gives her the ability to do a weapon-specific super attack. While some type of chargeable ‘super’ form has been a staple of character action games for almost two decades, having two to keep track of feels unwieldy. Even worse, Wrath is activated by right shoulder button + left shoulder button, while Havoc is activated by right shoulder button + left trigger button. This makes it far too easy to accidentally do one when trying to do the other. Combine that with LB + face button weapon switching and D-pad item switching, and it’s a bit too much to handle in the heat of battle. 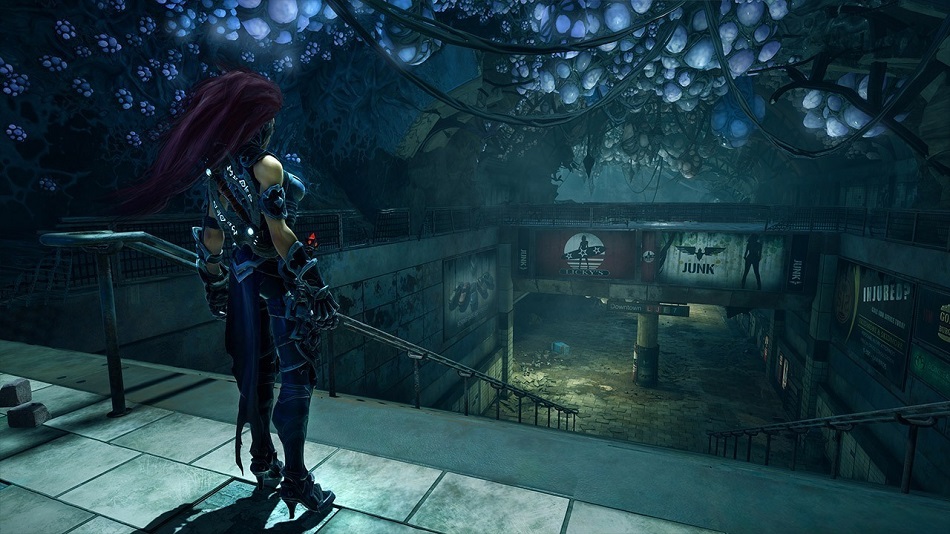 Darksiders III also dispenses it’s previous Zelda-lite level design in favor of more concentrated Dark Souls-style areas. This limited space allows for more creative enemy encounters, and each area feels genuinely unique. Bosses in particular feel like they had a lot of effort put into them, in stark contrast to the earlier games. Unfortunately this design choice does lead to many areas feeling too constricted, falling far short of the grandiosity of some of some of Souls’ famous locations. Still, I’ll gladly take constricted and unique areas over bland open spaces. Not having to deal with unnecessary open-world mechanics or more complex Zelda-style dungeon puzzles means that the pieces of Darksiders III feel like they actually fit together.

Darksiders III is shameless. It copies Souls level design right down to some of that series’ most famous tropes, such as hiding enemies around corners in long hallways with an archer. Fury’s Havoc form is strikingly similar to Devil May Cry’s devil trigger. However, in limiting the number of influences this time around, Gunfire Games has been able to focus on making those influences work together rather than fitting in as many popular game influences as possible. Instead of the tasteless sludge of the past, Darksiders III is closer to being a pleasant smoothie. Rating: 7.5 out of 10

Disclosures: This game is developed by Gunfire Games published by THQ Nordic. It is currently available on PC, PS4, and Xbox One. This copy of the game was obtained via retail and reviewed on the PC. Approximately 15 hours of play were devoted to the single-player mode, and the game was completed. There are no multiplayer modes.

Parents: The ESRB has rated this game Mature for Blood And Gore and Violence. I actually think the M rating is a little over-aggressive, as there isn’t much in the way of graphic or objectionable content. From the ESRB’s official description: This is an action-adventure game in which players assume the role of Fury, one of the Four Horsemen of the Apocalypse on a quest to hunt down demons. From a third-person perspective, players traverse open-world environments, solve various puzzles, and battle demonic creatures. Players use whips, flails, daggers, and magic attacks to kill enemies in frenetic melee-style combat. Large blood-splatter effects occur as monsters are killed. In some sequences, large blood stains appear on characters’ bodies and floors; one scene depicts the head of a decapitated animal.

Deaf & Hard of Hearing Gamers: All relevant lines are subtitled and there are no significant audio cues. 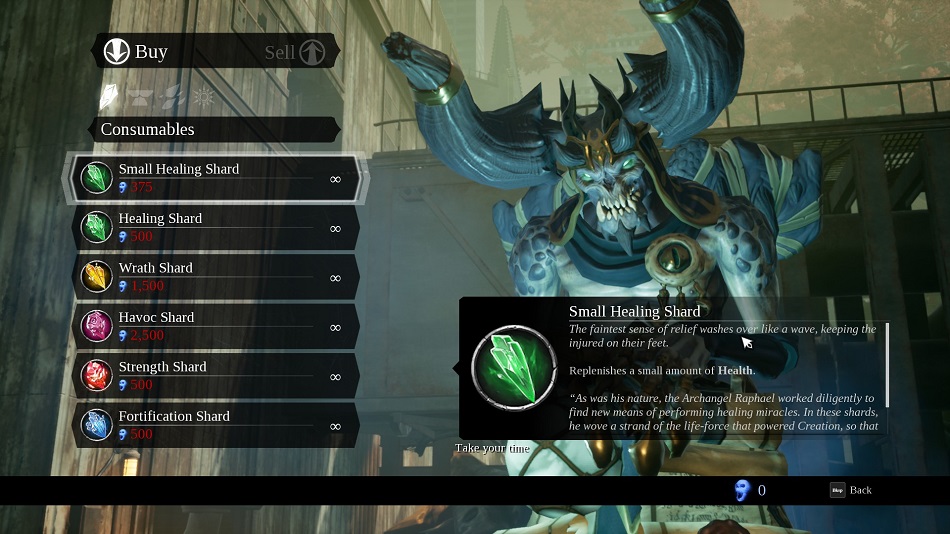 Remappable Controls: The game does not have remappable controls of any kind. 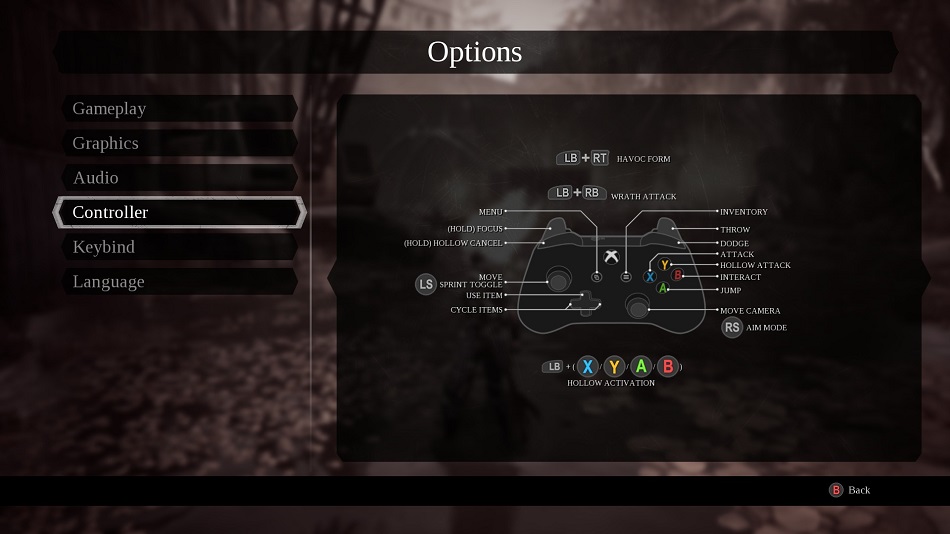