All the flavors come together 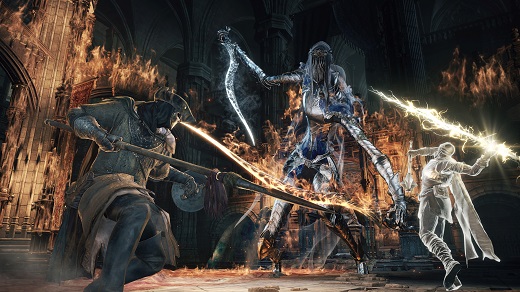 HIGH Dancer of the Boreal Valley, Pontiff Sulyvahn, and the Abyss Watchers

WTF Getting booted when my Steam connection dropped

With 2009's Demon's Souls, From Software gave me something that I'd never had before, and I was initially apprehensive about it—much like I am with new foods. The ingredients were familiar since I'd played Action-RPGs in the past, but they'd never been put together in quite that way. It eventually became a revelation, and while each successive follow-up changed the recipe a little bit, the core of the dish has remained largely intact.

Demon's Souls? Good, but some of the garnish was nonsensical. Dark Souls? Parts of it were undercooked. Dark Souls 2? The appetizers needed work. Bloodborne? Too spicy. With Dark Souls 3 I was presented with something I've consumed many times before, but was still excited about having again. While it's definitely comfort food, it represents the series' most balanced, well-seasoned effort to date.

The player starts as a lowly, powerless undead in a world of frighteningly powerful monsters. With the exception of Bloodborne, Souls games aren't difficult in the traditional sense of requiring precise timing and twitch skills. Instead they're demanding of the player's attention to detail. Situational awareness, pattern recognition, and above all patience are the keys to survival. This remains true in Dark Souls 3, and the lessons taught in every iteration of Souls are on display here.

The ingredients of Dark Souls 3 will be familiar to anyone who's sampled others in the series. The world design is reminiscent of the first Dark Souls—sometimes too reminiscent. Dark Souls 2's improvements to things like equipment upgrades, multiplayer covenants, and general online play mechanics are present. The speed and aggressiveness of Bloodborne's enemies are here, but not overwhelmingly so. To top it off, Demon's Souls thematic references are sprinkled throughout.

In a way this hybridization is a problem, since Dark Souls 3 often feels less like its own venture and more like a repackaging of the other four games. This is especially apparent in one specific late-game area that calls back to an older title a bit too much. For a series that's always featured solid level design and interesting world construction, such a blatant nostalgia play was irksome.

That said, the fact that I've enjoyed these elements many times previously doesn't stop them from being excellent—indeed, Dark Souls 3 features a balance of hardships and consideration for players that's unmatched by the rest of the series.

For example, this is the best-paced of the Souls games by a wide margin. Every time I felt like I was hitting my breaking point, I was presented with a bonfire, shortcut, or some other form of reward for my efforts. This is in contrast to the sometimes-absurd distance between checkpoints in Dark Souls 1, and the over-saturation of bonfires in Dark Souls 2. The challenge is still very much here, but it's metered out evenly enough as to never be overwhelming.

Level design has also been tightened considerably. While there's definitely a strong sense of linearity in Dark Souls 3, the world never feels too constricting. I had a clear sense of where I was and where I was supposed to be going most of the time, and there were enough side paths and secret areas to make exploring most areas feel worthwhile. There is a finely tuned balance between sprawling branches and the critical path, which has sometimes been missing in the past.

The exceptional combat mechanics the series is known for are back and as good as ever. The introduction of special abilities linked to specific weapons (weapon arts) and the new ashen estus flask (for restoring magic points) are both welcome, and some of the enemies and bosses rank among the best in the series. Each was a uniquely enjoyable experience, with no throwaways among the lot. This overall quality is a marked improvement from previous games where there were often repeats and tweaked versions of old fights, and the degree of effort that went into each boss was refreshing.

Now that I've lavished the game with praise, I have to say that I sincerely hope Dark Souls 3 is the final entry in the Souls series, proper. This new entry banks its entire identity on being the sum of parts we've seen before, and the sense of familiarity can be too much at times for series vets. In my view there isn't a lot left for From to do with this universe, and the large number of callbacks and references to older iterations are only acceptable in a finale anyway. While it's definitely good enough to stand on its own, it functions best as the final, most masterfully-prepared version of a dish I've had many times. Rating: 9.0 out of 10

Disclosures: This game was obtained via retail and reviewed on the PC. Approximately 67 hours were dedicated to completing the game once, with all time being spent online.

Parents: According to the ESRB, this game contains: blood and violence. This isn't an overly bloody or gory game, but a lot of the imagery could be disturbing to younger children.

Deaf & Hard of Hearing: While all spoken lines are subtitles, audio cues are crucial to navigating the world and detecting hidden enemies. I would imagine that deaf players would have a very difficult time here.

Remappable Controls: All controls for both controller and keyboard can be remapped from the settings menu.