Mcnamara? Really? You Couldn't Throw Eisenhower or Truman in There? 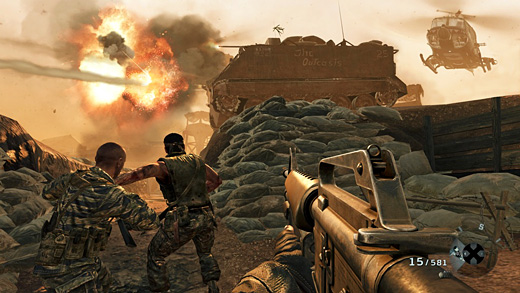 HIGH: JFK spouting off one-liners while blasting zombies in the face.

LOW: The complete and total incompetence of my squadmates.

WTF: Why does the guy I'm torturing suddenly turn around and help me when the bad guys show up?

I have a notebook that I scribble notes in when I'm playing a game for a review. The subject of the notes can range from something important about the game to some witty saying that I just have to share with the internet.

Regardless, I usually have about a page's worth of scribbles that come to mind during my playtime. Call of Duty: Black Ops, the latest entry in the long running franchise, is an anomaly in that this was not the case. In fact when I finished the single player mode and had spent some time with multiplayer, I was a little surprised to find that I had written only one word.

That one word was "competent." After a total of roughly eight hours with Black Ops that's the extent of what had jumped out at me. Nothing profound, nothing grievously awful, and nothing particularly noteworthy. Just… competent.

The campaign is as standard as can be found in an FPS. I ran through several hallways (or what amounted to hallways), shot bad guys with various types of weapons whilst they yelled things in some foreign language, took part in a few vehicle oriented segments, and watched some scripted events where I pressed buttons and cool things happened.

The firefights were enjoyable and intense overall. Combat in and of itself was sufficiently challenging, but the game was so overbearing it felt like I was playing an extremely long tutorial level. Almost the entire game is spent either following one of my squadmates (who apparently don't care if a guy runs right past them to stab me in the back) or going to some sort of HUD marker. While telling me where to go and what I need to do is certainly important, having my hand held nearly the entire time makes it feel extremely shallow.

Saying the story was enough to keep me from getting bored doesn't sound all that great, but it's the truth. The soldier/spy intrigue was done well enough to keep me interested, but beyond that there isn't anything all that fascinating. While it might seem like Black Ops is trying to say something about the historical events around which it is based, ultimately the Vietnam War and the Bay of Pigs invasion serve as nothing more than window dressing for the thin Tom Clancy-like plot.

The multiplayer evokes much the same feelings as the campaign—solid, enjoyable, but nothing special. I didn't see anything here that I hadn't seen in other similar games. I did find it to be fairly accessible as I was performing reasonably well within my first few matches, though. Rewards such as extra weapons and class configurations came quickly, and the ins and outs of playing against other people were pretty easy to pick up. It's good for a few romps every now and then, but I don't see myself sinking much more time into it.

At first glance, the much-hyped zombie mode might seem like the genuinely unique portion of the game. However, the novelty of John F. Kennedy, Fidel Castro, Richard Nixon, and Robert McNamara all grabbing guns and going on a zombie hunt loses its appeal pretty quick. As a result we're stuck with what amounts to a cheap knockoff of Left 4 Dead's survival mode, with only two maps to boot—and while JFK's snarky one-liners are usually good for a chuckle, zombie mode is actually the weakest part of Black Ops.

Trying to put "yeah, it's OK" into a full article is harder than one might think. Games that stir strong feelings are much easier to write about, simply because I'll have a ready supply of superlatives to churn out into paragraphs. In this case, there's really not much else to say here—the FPS is a somewhat stagnant genre nowadays, and Black Ops is Exhibit A as to why. There's no real creative risk being taken, and while that might be just fine for sales figures, it doesn't bode well for Call of Duty: Black Ops' ability to stand out artistically in the immensely flooded FPS market. Rating: 6.0 out of 10.

Disclosures: This game was obtained via retail download and reviewed on the PC. Approximately 6 hours of play was devoted to single-player modes (completed 1 time) and 2 hours of play in multiplayer modes.

Parents: The game has been rated M by the ESRB, and contains blood and gore, intense violence, and strong language. Those content descriptors and the rating should be pretty self-explanatory. No kids, folks.

Deaf & Hard of Hearing: You should be fine. Audio is never a major factor in gameplay, and every meaningful spoken line is subtitled. In multiplayer you'll be at a slight disadvantage since you obviously won't be able to use voice chat, but it shouldn't be too much of a problem unless you want to play competitively.

I disagree, WaW on hardcore was brilliant and Treyarch also made COD 3 which had a very good multiplayer and single player game.

I also do agree with you on that zombie mode is really fun and it’s good that they put it back in cod. I still have to disagree with you on that modern warfare 2 would be the best call of duty. You obviously haven’t played the multiplayer all that much if you say that it was good. Modern warfare 2 multiplayer was horrificly unbalanced and frustrating. I have played mw2 mutliplayer over 20 days and i know what im talking about.

Infinity ward created the best COD’s, the modern warfare series. Treyarch have completed possibly the worst COD, world at war (seriously, have you tried playing that on the hardest level, granade much?) and a good, but not great black ops. Multiplayer – I think this is the strongest part of black ops, but they haven’t advanced much from modern warfare 1, if at all. Zombies – If you haven’t played it on world at war then it will provide you with some fun, for about an hour… maybe more if you are with friends. Story – Did not live up… Read more »

I totally agree with every word, well said. I think the as-expected rave reviews for the game are yet more proof of the immaturity of most of the gaming press.

I would have to respectfully disagree with the comment that zombies is the worst aspect of the game. In world at war zombies was played a lot by many many people and i’m happy that they brought it back in black ops. In my personal opinion after beating story mode, playing zombies, and playing in online freeplay and wager matches i would say the multiplayer aspect of the game is its weakest link…The new weapons are cool and all but the graphics on the maps, how the guns look like plastic toys, and the cheap firework sounding explosions are a… Read more »