It's Not Worth the Obvious Pun 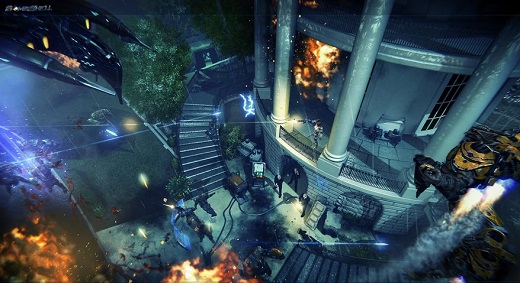 WTF Grenades that roll past enemies, go in a circle, and then off a ledge

I honestly can't remember the last time I was let down by a game as hard as I was by Bombshell. I certainly wasn't expecting a simple twin-stick shooter to be the pinnacle of the medium, but the elevator pitch of "badass lady with a robot arm blasting aliens" behind it was appealing enough.

Shelly "Bombshell" Harris is a former explosives disposal expert who lost an arm in a blast caused by a mad scientist. After accepting a mechanical arm that can transform into a variety of weapons, Bombshell goes on a one-woman trek to destroy the scientist and rescue the President of the United States.

This premise for Bombshell is a good one, and is set up for the kind of extravagantly violent absurdity that drives titles like Saints Row or Borderlands. Shelly herself has a pretty slick design and lots of potential. However, the positives end there. Everything else in Bombshell? A total mess.

The visual presentation is awful on many levels. First, the graphical fidelity is inexcusably poor for a game released in 2016. We can harp on how graphics don't make a game as much as we want, but there has to be a certain level of quality in order to make it tolerable to look at. All the objects in Bombshell are strangely distorted and fuzzy, and that's with me playing on a brand-new gaming PC with a modern video card. Of course, such grunginess can be accounted for with a unique and appealing art style, but Bombshell fails there as well.

Outside of the main character, the game is incredibly boring from an artistic standpoint. Environments are bland and the enemy designs are dull, with the same four or five models being used over and over again with only minor tweaks here and there. Those tweaks are also barely visible due to the aforementioned graphical fuzziness.

To make matters worse, the user interface is terrible. The objective list, weapon indicator, and health/energy meter are all so massive that they badly obscure one's view of the surroundings. The camera is also center-locked to a zoomed-in view of Bombshell, which makes following the on-screen action more difficult than it should be, even on a large monitor.

Now, five paragraphs later, I can finally start talking about the mechanics, which are—surprise!—also terrible. Enemy encounters are sloppy, and the AI is laughably simplistic even by video game standards. Most of the time they either charge with reckless abandon or wander around in a circle doing nothing. Most large enemies will simply muddle around or even stand still while they're riddled with bullets from afar. Combine this with little creativity in level design, and we've got a bunch of hallways filled with monsters walking in circles that might shoot the player sometimes.

Weapons also suffer from the same jankiness as everything else. The railgun upgrade for the base weapon is far stronger than anything in the game, rendering other weapons useless outside of a few specific situations. Sometimes grenades, or "Bowling Bombs" as the game calls them, will roll towards an enemy, past them, go around in a circle, and then fall off a ledge.

Glitchiness also abounds, with enemies often freezing in place or walking off ledges for no apparent reason. Sometimes text boxes will stay on the screen long after the lines have been spoken, or just not appear at all. Bombshell's one-liners—meant to be snappy—are completely flat, and often trigger at strange times outside of combat. The game's one possible saving grace, Shelly herself, is devalued and diminished by all the garbage around her.

Frankly, there's so much wrong with Bombshell that I could spend another 5000 words just describing problems instead of writing an actual review. Not since Star Wars: The Force Unleashed II have I been so completely turned off by every single facet of a game. Bombshell is a failure in every meaningful way, and feels like a barely-functional Alpha build rather than the finished product it's supposed to be. Rating: 1.5 out of 10


Disclosures: This game was obtained via publisher and reviewed on the PC. Approximately 6 hours of play was devoted to single-player modes, and the game was not completed. There are no multiplayer modes.

Parents: According to the ESRB, this game contains: intense violence, blood, and gore. This definitely isn't for kids, but honestly I would be more concerned about exposing them to such bad level design rather than some blood or some sexual innuendos.

Deaf & Hard of Hearing: Audio isn't a major gameplay factor. While all spoken lines should have subtitles, sometimes the text boxes won't appear. Again, it's glitchy.

You’d think 3D Realms would’ve learned from their mistakes after Duke Nukem Forever and TRIED to make something at least passably playable for their next game… but nope.