Do not Waste Your Time Playing this Game 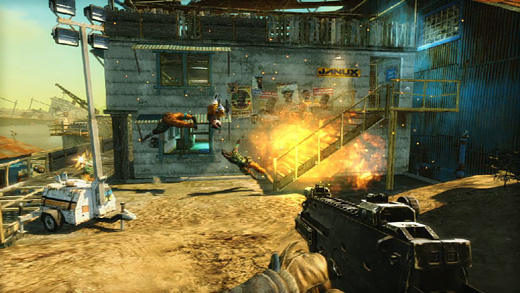 LOW Everything before that.

WTF Why was this made?

Boring. Tedious. Dull. Bland. Especially "bland." These words and others like them tend to get thrown around a lot in reviews, but few games earn these adjectives more than Bodycount

, the very definition of generic first-person shooter. In every possible respect, this game can be described as "bland." Now because this game is so bland, it's difficult to express my opinion without constantly using the word "bland" over and over. So, in the interest of making this more interesting, I will not use the word "bland" again. It'll be tough, but I'm willing to make that sacrifice for the good of the Internet.

In Bodycount, the player is cast as a nameless operative working for a shadowy organization called The Network, whose apparent reason for existing is to infiltrate global trouble spots and restore order by killing everyone involved. On one of these missions, the operative discovers…something, and has to take out this said something. That's really as deep as it gets, and while a deep story isn't necessarily required in a game like this, the depth of the story matches the depth of the game.

Bodycount's run-and-gun gameplay is mediocre and awkward. The controls are fairly sluggish, and gunfights tend to be frustrating affairs due to this. Trying to react to enemies is frustrating, especially when they have the annoying habit of spawning behind me where I can't see them. The HUD in particular is also perplexing, as information like the ammo count is very small and displayed in a very difficult to read color scheme.

The environments are dry and uninteresting, and on top of that, the game consists of a near straight line between different waypoints, making for an extremely simplistic experience.

Bodycount is incredibly repetitive, even compared to some of its contemporaries like Call of Duty: Black Ops. Almost all gameplay consists of shooting near-indistinguishable enemy types, with an occasional bullet sponge enemy thrown in to "break" the monotony.

Honestly, if it weren't for the HD presentation and graphics, I would have guessed this game came out around 2000 instead of 2011—and even then, the game's formula is so incredibly simple and the environments so dull that it wouldn't have stood up to the likes of Turok on the Nintendo 64. Calling Bodycount a "throwback shooter" is far too kind. "Stagnant, outdated shooter" fits much better.

In fact, after finally removing the disc from my Xbox, I was left wondering why this game was even made, let alone released. Normally with such a terrible product, I can at least see what the developer was trying to do (a la Star Wars: The Force Unleashed 2 or Dragon Age 2) but in this case I couldn't even figure that out. It's almost as if releasing a shooter that wouldn't have held up in the late '90s was their goal. If so, they exceeded with flying colors. Drab, dreary flying colors.

is a bad game. A very bad game. It's overly simple, the setting is dry, and the controls don't even work all that well. There is quite literally nothing good about it. It is the very personification of…bland. Yeah, I broke my promise. So there.Rating: 1.0 out of 10.


Disclosures: This game was obtained via publisher and reviewed on the Xbox 360. Approximately 4 hours of play was devoted to single-player modes, and the game was not completed. No time was spent in multiplayer modes.

Parents: According to the ESRB, this game contains blood and violence. It's about as violent as Halo, so base your judgment on whether to give this to your kids on that. Although making them play this might get you brought up on child abuse charges.

Deaf & Hard of Hearing: You'll be fine. Spoken lines and audio aren't factors in gameplay, and there are sufficient visual aids, although they are somewhat hard to see/read.

One thing I’d have mentioned is that it’s almost impossible to tell how near death you are. I guess it ties into the HUD complaint, but that was the single craziest design decision I noticed.

You know, seemingly inexplicable death sequences being so great and all.