Two Halves of a Trick Coin 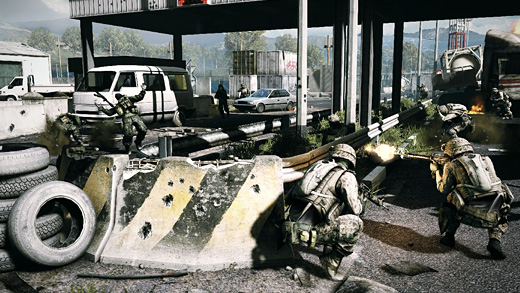 HIGH Driving a tank, running into an enemy tank, frantically trying to shoot each other, and then getting out and destroying both tanks with rockets.

A game being split between a dedicated single-player and multiplayer experience is not new. In fact, it's becoming the standard if the previews of Mass Effect 3 are any indication. The problem with this approach is that usually one side of the experience suffers at the expense of the other. As examples, Metroid Prime 2's multiplayer was infamously shoehorned in where it was clearly not needed, but the single-player was still good, if a little lackluster. The campaign in Halo 3 was woefully short and unsubstantial, but the multiplayer was top notch.

falls into Halo 3's multi-heavy camp, and thus it presents an interesting dilemma in game evaluation: here we halve two wildly different games in one package. One half is a linear, droning single-player campaign that fails to stand out in any real way. The other half is a massive multiplayer romp that, while not particularly innovative, is still a blast for anyone who enjoys team-based online first-person shooters (FPSs). Is it fair to evaluate both halves together as one game?

The single-player game is, as I said, a linear slog. Just like countless others in its genre (Homefront, Call of Duty: Black Ops, etc.) the campaign is a simple point to point journey interspersed with shooting and explosions. There is little to say about it, other than when playing I was constantly questioning why it existed. Run to the objective marker, shoot the thing/things in my way, run to the next objective marker. Repeat step three until finished.

Honestly, Battlefield would be better served by a freely accessible set of tutorial missions instead of having this sort of single player mode. Being able to practice things like basic tactics, learning the differences between the classes, and above all else, grasping how to fly the helicopter would have been extremely welcome. Instead, I was forced to find a newb practice server and just stand around waiting until the helicopters and jets respawned.

In contrast, the multiplayer is exactly what one would expect, which is a good thing. Taking part in a 64-player game of Rush was a great time, even without any kind of tutorial I found myself picking up the nuances of the game within a reasonable period. I stuck primarily with the Engineer class (which should not be a surprise given my Team Fortress 2 habits) and sticking to my role of healing the tanks and blasting rockets every which way. It's clear that Battlefield 3's multiplayer was the focus during development, and in this regard I enjoyed myself without question, even with the twitchy helicopter.

The PC is obviously the ideal platform for Battlefield 3, as dedicated servers and support for such a large amount of players would be impossible on a console platform. However, while I had some great sessions once I got into a game, the process of finding a game is far more troublesome than it should be.

In order to do anything online, players must use the Battlelog, a web-based interface for joining games and maintaining a friends list. The Battlelog is a pain to use, as simple things like adding someone to my friends list, setting up voice chat, or even just browsing for a server are hidden within a mess of unnecessary pages. It's mind-boggling to me why they chose to do something like this instead of having a simpler in-game system to handle it, because in the age of sleek infrastructure systems like Steam and Battle.net, this kind of mess is totally inexcusable.

I enjoyed my time with Battlefield 3

's multiplayer, and I wish my thoughts about the game could end there. Unfortunately it also tried to force a totally unnecessary single-player game on me, and the browser interface looks like it came straight out of the 90s. It's a shame that the developers couldn't realize which half of their game was the better one, since ditching the single-player in favor of ironing out the problems with multiplayer might have resulted in something truly epic. Rating: 7.0 out of 10.


Disclosures: This game was obtained via publisher and reviewed on the PC. Approximately 2 hours of play was devoted to single-player modes (not completed) and 5 hours of play in multiplayer modes.

Parents: According to the ESRB, this game contains blood, intense violence and strong language. The level of violence and cursing is about on par with what once could expect in an average war movie, so kids should probably be kept away.

Deaf & Hard of Hearing: You should be fine, mostly. The screen is rife with visual aids and audio isn't a major gameplay factor. However, if you try to play multiplayer in hardcore mode (where visual aids are at a minimum) you will likely have some problems since you'll be far more reliant on sound in that situation.

Sorry to resurrect this but something caught my eye:

As much as I have grown to hate, loath and then finally detest battlelog over the year and a bit since it came out….. I’m really confused as to how you found it to be “90’s”.

Perhaps you should do some creative Google searching to remind yourself what 90’s browsing truly looked like.

Outside of flash games what got launched with a browser?

So true what you say man! Love to the Battlelog.

Battlelog is a “pain”? Really? Your Metacritic summary claims “the browser interface looks like it came straight out of the 90s”… I have to ask– what browser/OS are you using? IE5.5 on Win98? The website is one of the most interactive and well-thought-out server browser systems for any game I’ve played. The integrated stats server history, filtering and other features are priceless, and you really won’t find this much attention to detail anywhere else. It’s also very well designed. The 90s? Really? Were you even alive in the 90s? You must have a very specific aesthetic, if you think Battlelog… Read more »

Absolutely agree with the need for BF3 to have discarded the single player Crap-paign and instead gone with a useful tutorial/training grounds segment. Especially for the players new to the BF series. There is a Steep learning curve before one becomes a good Pilot of a Jet or Chopper. Trying to learn to fly during a live online match is an exercise in frustration. The better pilots and ground units kill you before you get 30 seconds of flying in. Making it very frustrating when trying to learn proper Flying tactics and leveling up to get the Chopper and Jet… Read more »

Strictly speaking this is not the most thorough review I’ve ever read on this site. But in the same time the author is right about not having to actually go into an in-depth analysis of the multiplayer – chances are the vast majority of people who buy Battlefield 3 already have pretty substantial experience with other online FPS games and most likely any of the last two Call of Duty games and/or BF: Bad Company 2. As such, there is really no need to basically describe all the basic features (although a few words on what has changed in different… Read more »

I do say it’s an online multiplayer FPS, which should be descriptive enough for any moderately experienced gamer, so an in-depth analysis of what it is shouldn’t be necessary. And as for Modern Warfare 3, I haven’t played that so I can’t make the comparison. Reviews aren’t meant to be lists of features, and any extended discussion about the exact design of multiplayer would have been exactly that. Battlefield has a forumla that hasn’t changed a whole lot over the past 10 years, and BF3 doesn’t alter that formula in any significant way, so frankly there isn’t a whole lot… Read more »