When Firefly is the highlight of your Batman game, you have a serious problem 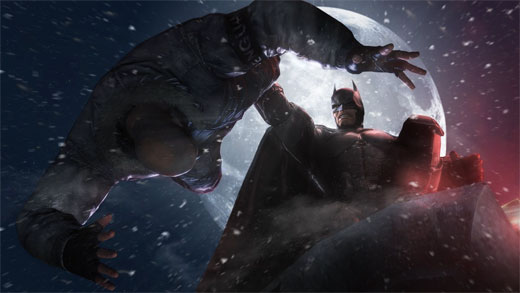 HIGH Everything involving Firefly, minus his dialogue.

LOW Everything involving Bane, including his dialogue.

WTF If I need to sneak into the police station without drawing attention, why am I fistfighting the entire Gotham Police Department?

The Arkham games have always stood out to me for two main reasons — the first is that they're just good games in general, combining elements from franchises like Metroid and Zelda with a simple (yet deep) fighting system and stealth mechanics to keep things fresh. The second reason is that while the overall narrative is rather poor in both games, the Batman "feel" is pitch perfect, especially in Arkham City.

, we're purportedly taken back to play an earlier, less experienced Batman in order to explore the, uh, origins of the Bat and many of the mainstay villains that we see in later games. While this is a great idea in theory, Origins feels less like a trip back in time and more like a half-finished Arkham City. The feel that was so right in the first two games is now essentially gone outside of a few short segments, and combined with many other problems, Origins falls well short of the standard set by the rest of the series.

Things begin when crime lord Black Mask puts a $50 million bounty on Batman's head, and all manner of villains come to Gotham to collect. While Origins scrapes the bottom of the barrel as far as Batman's rogues' gallery is concerned, this does set up the potential for a lot of unique battles with the various assassins. Unfortunately this potential is almost totally wasted, and even if it weren't, the atmosphere is so wrong that it may not have made much of a difference.

First, the vast majority of the game runs counter to the idea that this is a rookie Batman. As the adventure begins, he already has his fearsome costume, most of his gadgets, the batcave is all set up, and he can stomp most criminals without fear. There are very few times when Batman ever feels overmatched or outclassed, and this lack of green-ness robs the game of any progression that might have been had by, say, seeing him invent his mainstay tools like the Batarang, or even by being bested by the common thugs he tries to thwart. Without a hero's journey, we're left with an origin story with very little origin in it.

Speaking of the story, Origins seems content to let motivations and reasoning for several characters go completely unexplained, particularly Bane. To say any more would go into spoiler territory (not that there's much worth spoiling) but it culminates in a painfully stupid ending sequence that makes the underwhelming Asylum and City endings look like brilliance in comparison.

In contrast to the previous games where the environment was used to convey much of Gotham's atmosphere, Origins relies on some short combinations of cutscenes and platforming/combat to get the "origin" angle across — it's about 20 or so minutes of content, and it takes about half the game to get to it. The little backstory that exists is fairly well done (particularly one bit concerning the Joker), but the inelegant way in which it's told plus the time it takes to get there severely hampers its effectiveness.

In a broad sense, this version of Gotham feels flat and lifeless compared to the open world from City, which is particularly bad considering that the area in Origins is quite a bit larger. The previous clever level designs have been replaced by a lot of group melee fights which get old, fast. There were countless times where I was asked to infiltrate an area to "gather information", only to fistfight about a hundred thugs instead of actually sneaking around in a Batman-like fashion. There are also plenty of side missions to do, but very few of them felt compelling enough for me to investigate.

The level/encounter design problems extend to the bosses as well. Of the eight assassin battles, there's only one that's significantly different from normal group battles. This was particularly disappointing, since Arkham City's bosses were not only competent Zelda-style "final exam" bosses, but they were well-designed around the character in question. Origins, on the other hand, seems to have taken a page from Arkham Asylum's book and just repeated the same two fights over and over again.

On top of all this, Origins is incredibly glitchy. There were several points where I had to reload my game or find some other workaround because I couldn't talk to an essential NPC or hit a switch I needed to progress. Combos and counters often won't execute when the right buttons are hit, and enemies would often get stuck in walls or float in midair while running. Asylum and City had none of these problems, making their presence in Origins extremely galling. Not only does this game feel unfinished from a design perspective, it also feels unfinished from a technical perspective.

It's tempting for me to say that Arkham Origins

might have turned out better if it were given some more time in the oven, but I can't even say that with good conscience. Things have been taken in such a fundamentally wrong direction on so many levels – to be perfectly frank, it would be better if Arkham Origins didn't exist. A potentially good Batman backstory is wasted on a cheap, buggy cash-in, and the reputation of an otherwise quality franchise has been sullied. My advice to those with a Batman itch? Replay Arkham City instead. Rating: 3.0 out of 10


Disclosures: This game was obtained via rental and reviewed on the PS3. Approximately 13 hours of play was devoted to single-player modes (completed 1 time) and no time was spent in multiplayer modes.