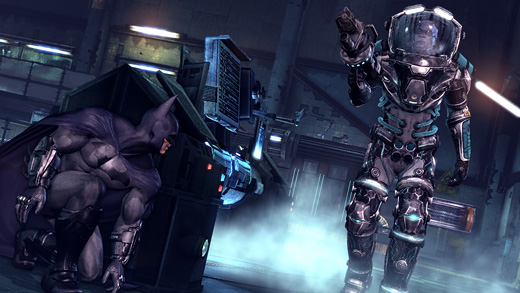 WTF Who the hell thought that creating Arkham City was a good idea?

Superheroes are a unique fixture of culture, especially in the United States. Like any other art form, these mythological gods reflect the values and attitudes of their time. Superman was born out the the Great Depression as a beacon of hope against all the injustices of the world. Spider Man's youthful, energetic persona was rooted in the free-wheeling 1960s. Batman is a unique superhero in that he has no special powers—he is a mere mortal that crashed the gods' party, and as such, he represents the idea that we could do it as well. A dark figure in every sense of the word, Batman is a "normal" person lashing out at the world that hurt him.

With their obvious immersive capabilities, games have always had a special opportunity to give players the true experience of being a superhero, but until recently they hadn't fully realized that potential. 2009's Batman: Arkham Asylum changed all that, as the Batman Experience was the heart and soul of the game. Almost every single design element was dedicated to making the player feel like Batman, and it succeeded brilliantly. Batman: Arkham City

seeks to bring that super-everyman experience to an even grander scale, and it also succeeds brilliantly… in almost every respect.

Not long after the events in Arkham Asylum, a portion of Gotham City has been turned into a massive prison for Gotham's worst criminals, including nearly all of Batman's most recognizable foes. Naturally, something sinister is afoot within Arkham City, and Batman infiltrates the prison to find out what it is. With an open world structure (as opposed to Arkham Asylum's confined Metroid Prime-like setting) Arkham City's area is far larger than its predecessor, giving the player the thrilling feeling of actually patrolling Gotham's darkest corners.

Controlling Batman is like a dream. Grappling and gliding around the city is a joy, and I never got tired of traversing the cityscape—a very important thing, as I had to do a lot of travel. The game's various missions will send Batman from one corner of the city to the other countless times, which in many games could have been a crushing chore. Thankfully, flying around the city is one of the best things about Arkham City. In fact, the open world helps give the player the purest Batman Experience ever devised.

Batman's (or any superhero's) nights generally consist of stealthy patrols around the city, stopping any evils he may come across. At times, Batman can be overwhelmed with calls for help, and while this may initially come off as annoying, I found it incredibly immersive. Think about it—how would Batman really feel on nights like this? Probably a little overwhelmed, right? That fact that the player is experiencing what it feels like to be at the city's beck and call for almost everything and never receiving more than a cursory "thank you" from the populace is one of the most "authentic" parts of being a superhero, and it's something Arkham City illustrates beautifully. 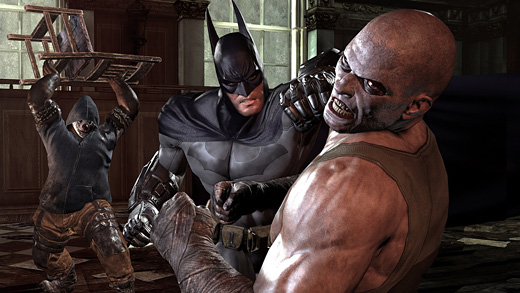 In addition, many of my problems with Arkham Asylum have been addressed. The hints that ruined a lot of the challenge in Arkham Asylum can be (mostly) turned off now. Enemy AI has been vastly improved as well. In the previous game, all I had to do was get above thugs and they would never find me. Now they'll occasionally (gasp!) look up, and in certain instances, they'll even check things like ventilation shafts and floor grates. These changes make the enemy encounters much more challenging, as they should be. Remember, Batman is not invincible. He has to use smarts and tactics to get the upper hand, and in Arkham City I was forced to be much more creative in how I approached the villainous hordes.

The bosses, one of Arkham Asylum's real sticking points, have also been vastly improved and designed in a way that measures up to the level of craftsmanship featured in the rest of the game. I won't go into to too many details here, but each battle with a major villain felt appropriate for that specific character —something that was sorely lacking in the previous game outside of the Scarecrow encounters.

While the mechanical flow of the game is unquestionably fantastic, I can't say the same for the narrative. In fact, the writing is undoubtedly the worst part of the adventure, and that's a real disappointment considering the involvement of Paul Dini, the mind behind the brilliant Batman: The Animated Series. The story of Arkham Asylum wasn't particularly great, but it did feel a much more focused than Arkham City. It's clear that Rocksteady tried to cram in every possible familiar villain and story arc that they could, resulting in a plot that comes off as just plain sloppy and overstuffed.

On a related note, another cause for concern is the game's overwhelming use of the word "bitch", along with some other cringe-inducing dialogue. With such a scattershot story, the writers apparently tried to (over)compensate by making the in-game chatter more "gritty", which involves lots of grisly spoken lines that feel very forced and awkward. It winds up standing out for the wrong reasons and it hurts the game overall.

Another failing is that the much-hyped Catwoman missions are dependent on an online pass, meaning that players who buy the game used will have to pay extra to play them. Online passes are something I generally despise, but I can say that players who don't have these missions available aren't missing a whole lot. While Catwoman is fun to use and handles differently than Batman, her missions are so short and infrequent that their omission isn't terribly noticeable. Still, this issue and the others i mentioned are tragic since they hurt the experience in a way that has very little to do with the overall design of the game.

Games have the ability to give players the experience of being a superhero in a very special way that is unique to the medium, and in Batman: Arkham City

that experience has been crafted to a near perfection. It's a downright shame that the game has the aforementioned issues, because everything else is absolutely masterful. Rating: 9.0 out of 10.


Disclosures: This game was obtained via retail store and reviewed on the PS3. Approximately 25 hours of play was devoted to completing the single-player mode once. There are no multiplayer modes.

Parents: According to the ESRB, this game contains alcohol reference, blood, mild language, suggestive themes, use of tobacco, violence. I'm honestly shocked that this game got a T rating. There's a TON of grisly stuff being alluded to ("I'll cut your eyes out","Cut them in two",etc.) and on top of that almost everything Catwoman does is sexualized in some way. These things are not *bad* in and of themselves, but if I were a parent I'd treat this as if it were M rated.

Deaf & Hard of Hearing: You should be fine. All spoken lines are subtitled, there are plenty of on-screen hints and visual aids, and audio isn't a significant gameplay factor.

The online pass and day-one DLC/pre-order crap really annoyed me with this game, so I’m glad you highlight it — well, sorta — as negative in the review. It’s pretty much put me off buying it, but if I do it’ll be on the PC anyway — a good move on Rocksteady’s part; wait for Skyrim’s release on PC to see what happens when you roll out a game clearly not optimised for the format (RAGE being the most recent example). PC gamers ain’t gonna be happy. =p