Your goldfish is jealous 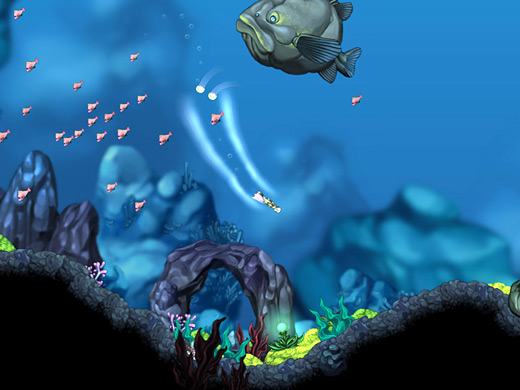 HIGH The dreamlike charm that permeates the entire game.

LOW Having to stop in the middle of the action to sing.

I could make several laughably bad "jewel beneath the waves" puns here, so I'll just save everyone the trouble and say that BitBlot's indie hit Aquaria is a definite winner…which, granted, also happens to be beneath some waves. In the realm of the 2D platformers that make up some of Aquaria's roots, I can say without question that it belongs on the shelf in the company of Super Metroid and Mega Man X.

The game follows the story of Naija, an amphibious girl living beneath the ocean who must solve the mysteries behind the disappearance of several lost civilizations of the water—loosely similar to Lady in the Water, except not boring or convoluted in the slightest. Indeed, the story reaches that evasive point between depth and simplicity, being compelling enough to make me care about Naija's trials while also being simple enough not to get in the way of the gameplay. And while the narrative is certainly a high point, the game's appeal consists of much more than that.

Aquaria has a certain charm about it that elevates it from a simple platformer to a fine gaming experience. Naija swims almost effortlessly through a gorgeous undersea environment (which gets more out of sprites than one would imagine) combined with excellent music/ambient sounds and a wide range of enemy and non-enemy creatures to be found. All of these things give way a dreamlike feel (and no, I was not on drugs) that holds throughout the entire game. Indeed, this feeling caused exploration of the game world to be a treat rather than a hindrance, which counts for a lot when the player spends a large amount of time searching each area for items and such. The music fits extremely well with the game's various settings, from the freedom of swimming through a new area to the intensity of an impending battle to a forgotten graveyard of a lost people. The character of Naija is also handled well—the voice work for her is great, and I saw more character development and exposition than one would expect from a game of this type. And on top of all that, seeing a female lead that wasn't over sexualized for once was refreshing to say the least. 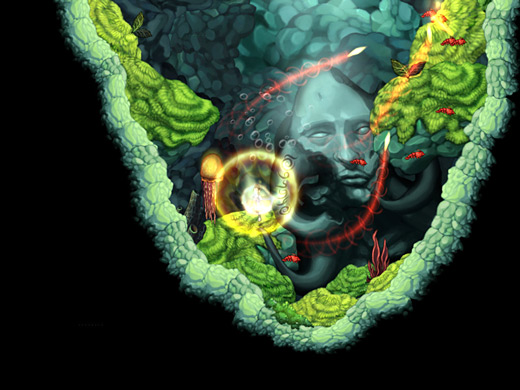 Aquaria's gameplay is simple and elegant, much like its 2D ilk. Naija must swim her way through dangerous waters, picking up various new abilities and treasures along the way. Starting in a small cave at the beginning of the game, progress yielded way to what became a truly massive universe, with the discovery and exploration of each new area bringing a real sense of accomplishment. Progression is ability-based, as the new forms Naija acquires will give her additional powers which will allow her to access more areas. There aren't very many puzzles in the traditional sense of the word, but there are several musical puzzles that make use of Naija's singing ability, which is also used to change forms and activate various devices throughout the game. I found the game to be challenging, but not so much that it ever became frustrating, achieving that hard-to-reach middle ground between boredom and frustration. The later levels in particular gave me some trouble, and ultimately it was satisfying to see such a pretty game not be afraid to show some fangs.

The only real gripe I can make is a slight one against the controls. The player has the option of using the keyboard/mouse combo or a controller. Personally I found some actions, precision swimming chief among them, better suited to the controller while others such as singing and form switching were better served by the keyboard and mouse. For example, during a few of the boss fights I had to switch from one form to another quickly in the middle of combat. This was somewhat awkward, as I found myself switching back and forth between using the keyboard and the controller in several instances, especially for the form switch hotkeys. If Aquaria ever makes the jump to a console, the ability to stop the action when I want to sing or having a form cycle function would be nice, since having to stop mid-battle and sing the song to change forms would be a tad frustrating.

Aquaria is an extremely high-quality product and a fine example of a genre that hasn't gotten a lot attention in recent years—it's no surprise to me that it took top honors at the 2007 IGF awards. Its charm and style engrossed me from the opening level and never let go, and I received an experience with lots of substance, challenge, and a little heart thrown in for good measure. I can only hope that a console version will be released eventually so its gets the greater exposure that it deserves. Rating: 9.0 out of 10.

Disclosures: This game was obtained via Steam download and reviewed on the PC. Approximately 16 hours of play was devoted to single-player modes. There are no multiplayer modes.

Parents: This game has not been rated by the ESRB at the time of this writing.  There was nothing major that I would be uncomfortable exposing a child to, although some of the monsters might be a little spooky.

Deaf & Hard of Hearing: All spoken lines are subtitled. However, some of the musical puzzles require playing a song by ear and there is a portion of the final boss fight that uses audio cues pretty heavily, so a person with poor hearing might have some trouble with this game.

I just tried Aquaria as part of the first „Humble Indie Bundle“, that rested on my hard drive since I bought it over a year ago. I was instantly stunned by Aquaria’s beauty and serenity of gameplay. I totally agree with your review. I haven’t had a boss fight yet, but I can already see your issue with the song control (playing with keyboard & mouse). I happen to have a 16:9 video projector and Aquaria is just MADE for it. I’m sitting on my couch, dreaming away in this wonderful world… Last, but not least, this is a cross-platform… Read more »

From the get-go, I never had any disillusion about what Aquaria was-it isn’t a rhythm game by any means, and if your desire is to just sing along with the background music, then yes you will be disappointed. As far as the lack of freedom to have fun that you experienced, I never encountered it and I completely disagree with your position. Cooking never bothered me, as it was simply a means of managing my resources in order to get better items. It gave me some control over what was in my inventory, making sure I wasn’t completely at the… Read more »

I gave Aquaria a fair chance. Five or six hours, maybe. I really wanted to like it, ever since I saw the first videos of it. I think there was a lot of potential there. But in practice it’s a total mess of a game. Aquaria wouldn’t let me enjoy it. I really liked swimming around and exploring and singing in harmony with the background music. If this were focused on that pleasant experience, I would love it. But it was so unfocused that it rarely let me have that experience. It seemed certain that what I really wanted was… Read more »