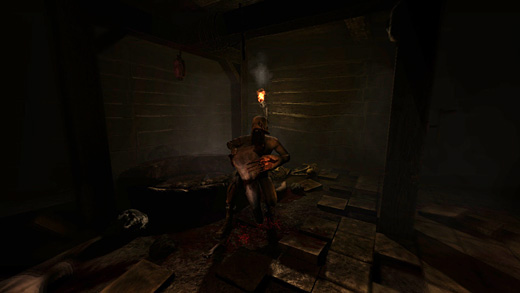 HIGH: Encountering a monster for the first time and being forced to run and hide.

LOW: Encountering a monster for the first time and being forced to run and hide.

WTF: Encountering a monster for the first time and being forced to run and hide

Games, like any other art form, are capable of eliciting very strong emotions. We get choked up when Aeris dies, we laugh at the antics of Phoenix Wright's quirky witnesses, and we get angry when Mega Man can't quite make that jump over the pit. Over time the range of responses that games are able to invoke has only increased, getting the player more and more involved in the goings-on of their worlds. Still, there is one emotional state that I've never felt in a game—fear. Constant, gripping fear. Ask yourself, have you ever felt truly afraid in a game? Have you ever felt for yourself the imminent danger that the player character is supposed to be feeling? I can't say I ever have.

is to date, the only game that has ever scared me. Not scared as in a short burst of shock, but in a heart-pounding, sweat-inducing, I-need-to-stop-playing-so-I-can-calm-down kind of scared.

The player takes the role of Daniel, the main character who wakes up in a dark castle with no memory of who he is or why he's there. That's the entire setup, and the simplicity of this concept lends itself brilliantly to the sense of isolation that Amnesia conveys so well. Completely alone in the castle, Daniel must contend with all the things going bump in the night on his own, with no map and completely unarmed save for a lantern.

Amnesia creates the best atmosphere I've ever seen. The wonderfully disturbing castle combined with subtle visual and audio effects are seamlessly woven together to create something terrifying on a level I've never experienced before. On top of the aesthetic, the structure of play is designed to ensure that the player is always on edge since there is absolutely no fighting back against the various enemies encountered. This prohibition on combat creates a sense of helplessness that challenges every video game instinct I've had burned into my psyche. 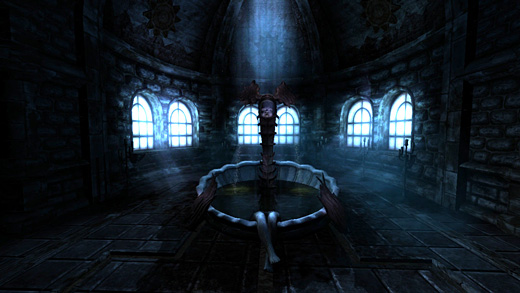 You see, the first thing any gamer thinks when encountering an adversary is, "how do I kill it?" That is the lesson we've had pounded into us. No matter what, the player always has some kind of weapon to use against the bad guys. Even in "stealth" games there's usually a way to take out or at least avoid a given enemy. We're always in a position of power, to a certain degree.

Amnesia is different. The player is completely defenseless against the horrors of the castle. My only recourse when encountering a scary-looking thing was to literally run and hide, and hope that they would go away. When combined with the aforementioned aesthetic, the game managed to keep my pulse elevated nearly the entire time. While true horror fans will likely salivate at this prospect, the crippling fear the game instilled in me nearly made me give up on it.

At the very beginning, Amnesia gives a few statements as to how this setup works.

Don't try to fight the enemies it said.

OK game, you got it, I thought.

Don't stay in the dark for too long, it said.

Not a problem, I thought.

Turn the lights off and put headphones on, it said, with a wicked smile inflected in the words.

Hmmmmmmm…….OK, I thought. Why not? If the game is going to lay out the terms by which it should be played, why should I not oblige?

I should not have obliged.

Amnesia is an extremely intense experience even with the lights on, and taking the game's advice on how to play makes it visceral. I only lasted about two hours or so with the dark/headphones setup before I had to turn the lights on. This felt incredible—the game was literally too good for me to handle. After seriously considering giving up, I chose to soldier on… With the lights on, of course. This made things a bit less stressful, but the game still had quite a few tricks up its dark, hideous sleeve.

I could hear it getting closer every now and then, and sitting in the dark caused my character's sanity level to slowly drop, which in turn caused the screen to distort and cue disturbing sound effects. My hand trembling over the mouse, I couldn't move, couldn't think, and couldn't even motivate myself to exit the game.

I've been shocked in games before. I've been startled, agitated, and even creeped out a little, but I have never, ever been as stunned by fear as I was at that moment.

That my friends, is fear, and Amnesia is a game that invokes it like no other. The imagination is capable of dreaming up things that are more terrifying than anything conjured up on a screen, and Amnesia does an excellent job of screwing the player's imagination to a point where it exists in a constant state of abject terror.

Of course, that's not to say that hiding from some shambling monstrosity is all that Amnesia has to offer. Oh, no no no.  As Daniel makes his way deeper into the castle, bits and pieces of the story are revealed at a steady rate and the true horrors of his former life become apparent. I won't spoil it here, but the details of Daniel's backstory are so gruesome and horrifying that I'm having a hard time thinking about them even now. Again, the atmosphere is amazing when it comes detailing these events.

is a game that I both love and hate simultaneously. I don't have the stomach for most horror (hell, I watched 20 minutes of Hostel once and had to turn it off) but I can't help but appreciate a game that does what it's trying to do, and does it so well. The fact that it was able to reduce me to a jumpy, gasping mass of mustached man more hesitant to open doors after playing makes me love it for what it is, while at the same time I honestly dread the thought of playing it again. It was without a doubt one of the most difficult, draining, and stressful gaming experiences I have ever had, but it's also an absolute masterpiece. Rating: 10 out of 10.


Disclosures: This game was obtained via Steam download and reviewed on the PC. Approximately 9 hours of play was devoted to completing the game once.

Parents: At the time of this writing, this game has not been rated by the ESRB. There's lots of blood, some gore, and tons of disturbing imagery. If it wasn't obvious from everything I said above, keep the young kids away. This game practically gave me nightmares, so I wouldn't want to see what it does to a little one.

Deaf & Hard of Hearing: Unfortunately, you'll likely have a lot of problems. Audio cues are used very frequently, especially when it comes to letting you know there's a monster nearby, and I think the game would be a lot more difficult without them. In a broader sense, sound effects are an important if not essential part of the experience, so you'll be missing out on a lot of the intended moods.

Yeah i remember when we were in the store i wanted mom to get a horror game & i thought Amnesia looked like it might be… Little did i know that i would be to frightened to even play, instead mom was the one playing the wholesale time & i watched. But even watching it i was at the edge of my seat because it was frightening & i could almost feel like i was there even though it was mom playing & not me. This is a game that deserves a reward. Horror Game Of The Century would be… Read more »

i just play this one ONCE, is freakening, shocking, disturbing and well done the fact that you lack of any method of defense, have a nut loose in the head and are scared of the dark makes an thrilling combo, and adds the sensation of fear, real fear to another level i try it ‘like a boss’ my 5.1 well positioned and lights off, i was able to play it for 15 mins, before turn on the lights, and check carefully my ENTIRE home to feel ‘secure’ sometimes the mouse ‘interaction’ tend to be frustrating enough, and add it the… Read more »

I beat this entire game and I can honestly say that is the proudest gaming moment of my life. Amnesia is not just the scariest game out there, but the scariest EXPERIENCE I have ever gone through.

Just going to jump in here a bit late. I never found Silent Hill 2 even mildly scary. It had some disturbing imagery and an atmosphere that should have worked for it. I’m pretty sure that the obtuse puzzles and lack of any real threat from the enemies is what really killed the game for me. However, I feel that Silent Hill: Shattered Memories took a step in the right direction. Having to run for your with nothing to protect actually evoked some sensations of horror. Unfortunately, the game dropped the ball in a lot of other areas. Amnesia, on… Read more »

Having Silent Hill 2 as my first horror game played leaves me proud and honored. Playing Amnesia: The Dark Descent after a few years leaves me absolutely dreaded, horrified, and completely satisfied. With graphics and audio becoming masterfully controlled I would not be surprised if a special horror game comes around with a label: “Warning! May cause temporary and/or permanent psychological/physical damage. I will be sure to play that game, when it comes around.

I liked Silent Hill but this game really takes fear to a new level.

of Siren. While in Siren you do have some weapons, they can only stun or slow the zombie villagers you encounter. The near-real contemporary setting made it even scarier for me. Definitely give it a shot if you still have a PS2 lying around.

Same here, but i think it might be because my computer is not powerful enough. The bluriness of Call of Cthulu did not bother me because I could still move my head around smoothly whereas there’s a short delay in Amnesia. I also felt sick playing Call of Duty Black Ops because of those lags.

I played Silent Hill 2 and I do not think its as scary as Amnesia (partly due to the first person perspective), but many many people do recommend it for its story alone.

I never had a problem with getting nauseous, but then again I don’t get motion sick easily. The unease from the distortion effects was intentional, so I’m not surprised it might get to some people though.

Loaded the demo after the glowing review at 4players.de.
Don’t know if i would like the game, it began slow, with not much i knew what to do and why i was there, but after some minutes it felt like i had to throw up because the effects punched my stomach…
Had no issue with the occasional shaky cam and blurring of e.g. Call of Cthulhu but the demo of Amnesia was too much.

The only other games so far i couldn’t stand playing where Unreal 1 and Jedi Outcast. Don’t know why those were incompatible to me.

If I was planning to jump into some other horror games SH2 would probably be first based on the recommendations I’ve gotten. This will do for now though 🙂

Agree with the Silent HIll 2 suggestion. Absolutely unnerving. Same with Fatal Frame 2. If I had a decent computer I would so be playing this right now.

You really should play Silent Hill 2.