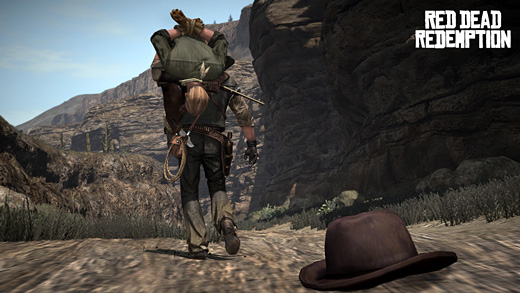 SPOILER WARNING. I MEAN IT.

I liked Red Dead Redemption. I want to throw that out there first, since a lot of what I'm about to say will probably make it seem as if I didn't like it. This is the first game in the Rockstar open-world family that I've been motivated to finish, mainly because of both the engrossing recreation of the (admittedly fictional) Old West and the character of John Marston. In the Grand Theft Auto games I've always succumbed to the desire to simply look up the cheat codes and wreak havoc on an unsuspecting city, as neither the character I was playing nor the city itself were interesting enough for me to want to explore them beyond causing mayhem.

Red Dead Redemption was different. I found more in the game universe than targets to blow up and John Marston is a big step up from the usual Grand Theft Auto-style sociopath. However, like Grand Theft Auto, the game gets overly repetitive in a lot of ways and contains its fair share of head-scratching design elements. While I'm well aware of the technical blemishes like clunky shooting or confusing horse riding, the game's greatest flaw is its pacing. This one aspect was enough to keep Red Dead Redemption out of the echelon of great games, and it's something that a lot of games get wrong.

The game begins with John approaching the hideout of Bill Williamson, one of the gang members John is hunting. As we progress through the beginning missions, John's history with Bill is revealed to a certain extent. He talks about their old gang days, but dodges questions about why he is now trying to track Bill down. The journey twists and turns as we must get help from a lot of varied and interesting characters, most of which bounce off John extremely well. Indeed, one of the biggest things that separates Red Dead Redemption from Grand Theft Auto is the fact that I actually liked some of the people that were giving me missions. Everything builds up to the climax at Bill's hideout, which the game does a great job of setting up.

Problem is, it wasn't the climax. 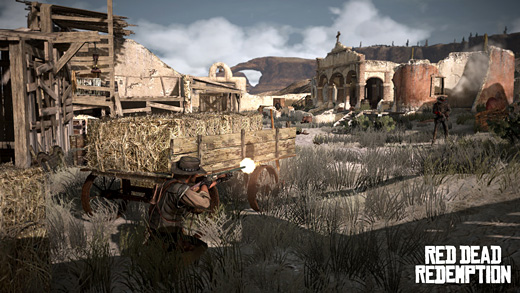 Bill somehow escapes to Mexico, and this is where the game is nearly ruined. While the drop in quality of the NPCs is a big factor, what really stuck out was that the focus becomes less on the conflict between John and his former gang and more about a Mexican civil war. On top of that, we're now focusing on a second gang member, Javier, who wasn't even mentioned in the first act and we don't know anything about. John talks about him here and there, but nothing ever comes close to the kind of pre-confrontation development we saw in the opening scene with Bill.

And after the Mexico portion is finally over, we're asked to go after the gang's old leader, Dutch. Let's stop here for a second. John is being forced to hunt down his old buddies in order to save his family, and the three pillars of that task are Bill, Javier, and Dutch. Bill is hugely important in the first act, but he almost completely disappears in the second. Javier is thrown in haphazardly and there's never really a connection with him. Dutch is a great adversary because of his history with John, but he is barely mentioned until the the last third of the game. I think things would have been a lot more focused and paced if the task of hunting down all three of them and not just Bill was made more clear at or close to the beginning.

Bill, Javier, and Dutch represent three "bosses" in a sense. Not that there are specific drawn out battles with them (nor should there be), but that they represent points of accomplishment to the player. Since the existence of two of them isn't even acknowledged until fairly late in the game, the narrative feel very meandering. I think some of that is intentional, as shrouding John's past in mystery is central to his "Man With no Name" persona that is so prevalent with the Western genre. And while keeping the player in the dark on a lot of things is important, a simple acknowledgment of the "I need to get these three guys" goal would have done wonders for keeping the narrative more focused.

Picture this. At the beginning, John mentions the three men he must find and not just Bill, who subsequently dies at Fort Mercer at the end of the first act. Instead of the sloppy focus on the civil war in the Mexico portion, we can see more of Javier, the contrast between him and Bill, and what it means in relation to John's past. Javier's defeat sets up the wonderful third act and the pursuit of Dutch. Everything from that point on can stay the same. That's a much clearer progression, and we don't have to deal with the civil war crap.

That's how I'd have handled it anyway. It's no secret that I love my boss battles, so even a set of bosses in spirit is appealing to me. Pacing Red Dead Redemption around some of these spiritual bosses would've alleviated a lot of the slowness and made the game more enjoyable overall.

The sidequests arent supposed to affect the main game, they there for fun and to fill the game up a little more, I think its an amazing gsme, my favorite one right now.

[quote=Richard Naik]
I don’t think an RPG would have worked with this particular story. Even the Honor meter was kind of superfluous, since there’s almost no incentive at all to ever be “evil” outside of just killing random people. A Western RPG would be interesting though.[/quote]

Oh, I wasn’t suggesting the same plot in this hypothetical RPG. But think what you could do with the coming of the railroad, water rights, corrupt and honest cattlemen, prospecting and more. Alas, it will never be…

[quote=”Pedro”] Definitely, after the Mexico section, I was just hanging on until the end as I wanted to finish it. The thing that kept me going was the same as frogofdeath below – scenery and atmosphere. I didn’t mind the family quests too much – roping horses or whatever they were – in the later section, as it felt more realistic than anything that had gone before. In fact I would love to see RDR: The Roleplaying Game, which would centre around the game’s less lunatic characters.[/quote] I don’t think an RPG would have worked with this particular story. Even… Read more »

I’m usually the first to agree when someone finally comes out and highlights flaws in a big – often hugely overrated – title, and heck, I usually can’t stand Rockstar-made games, but I gotta admit I don’t agree with you guys on this one. I mean, I can maybe see why one would find the Mexico section of the game dull, but I honestly never felt that at all, and only ever considered it after I had read some comments on the game. For me, the game’s writing, dialogue, characterisation, setting, sound, and – mainly – atmosphere was so compelling… Read more »

“Gameplay is essentially the same from start to finish, so if it doesn’t kill the beginning or the ending I don’t think it’s totally responsible for the middle’s problems. The tone you refer to works in the first portion of the game, then gets lost, and comes back again at the end. To me that’s the reason the middle section drags so badly.” It is the same, but at the beginning it is novel enough, and is supported by enough other things like engrossing story and characters, as well as the player learning the game, that the player hasn’t become… Read more »

Good commentary. I feel like the whole trip to Mexico makes the player completely lose any connection to Bill. He just kind of shows up at the end of the episode. Not sure why, but it definitely feels different than the confrontation with him stateside. Javier also seems tacked on, and I’m not really sure why he was included. For all intents and purposes, he probably could have been left out as a character. There was little added and his role may have been better suited played by Bill. Not sure I fully agree with your take on Dutch, but… Read more »

I 100% agree with your take on RDR. Although I would go a step further and say because of how absolutely lousy the game is once you hit Mexico, it’s not worth playing (because after that point, you won’t enjoy it).

I believe the game should have been about 7-8 hours long, instead of the ~15 hours it took me to finish. Everything Mexico and onward felt like a giant chore.

Plus, money, hides, side quests, etc. were all pointless because nothing affected the storyline in any way. RDR was – at best – a mediocre title gameplay-wise.

@Pedro Gameplay is essentially the same from start to finish, so if it doesn’t kill the beginning or the ending I don’t think it’s totally responsible for the middle’s problems. The tone you refer to works in the first portion of the game, then gets lost, and comes back again at the end. To me that’s the reason the middle section drags so badly. @Trent I haven’t played any of the Kain games, but you say that the pillar guardians are illustrated at the beginning. In RDR the only one we know at the start is Bill-Javier and Dutch aren’t… Read more »

Now I haven’t played RDR, so bear that in mind when you read this. It seems to me that Bill’s escape at the end of the first act was an attempt to keep the game from seeming formulaic. Imagine if they had, as you suggested, said “these three need to die” and then you kill one of them at the end of each act, bop bop bop. I mean, lots of games do that, but it’s also a really tired setup. I wouldn’t be surprised if Rockstar was trying to avoid that kind of rote progression, though it sounds here… Read more »

I think most people agree that the game lost coherency in Mexico and didn’t recover it till late on. While your proposal is interesting, and probably would have the effect of providing focus, I think there are more reasons why the game lags in the middle. In the first third, I think it suffers from being neither fish nor fowl – there are some great naturalistic characters in Bonnie and the Sherrif (whom I’d love to have seen more of), and then there were the freaks and geeks of the Gravedigger, Irish and the Snake Oil salesman. I enjoyed all… Read more »