Because True Heroes Dream in 3D 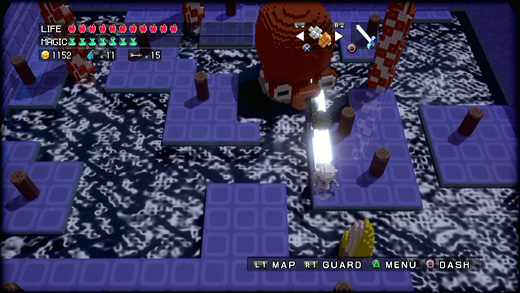 HIGH: Seeing the huge full-power sword for the first time.

LOW: The dungeon play can get a little monotonous.

Homage or ripoff? There's a very fine line between those two things, and the location of said line isn't always clear. Silicon Studio's 3D Dot Game Heroes tries to walk this line ever so precariously, banking on a full acknowledgment of what it is to keep it out of ripoff territory and in the house of homage. Fortunately this strategy pays off in the end, as we're presented with a sometimes retro, sometimes self-deprecating, and often charming adventure.

In some unspecified ancient time, the whole world was in 2D until it became apparent that nobody cared about 2D anymore, so the king decreed that the world would then be 3D—hence the title and the blocky appearance of the world's residents. This is not so much a plot device as it is an acknowledgment of the industry's move away from 2D gaming, which the game both mourns and celebrates at the same time in its visuals. Artistically, the game world is gorgeous, with a fantastic interpretation of what an old-school NES game would look like in 3D. The blocky characters and structures fit in just right, and the soundtrack also captures the mood superbly.

On top of all that, there's also a hero, a dark king, and a quest to stop him too, but that's really beside the point. This is as much the game's story as it is a commentary on the history of gaming and its evolution. There are constant references to old NES games and lots of little self-deprecating jabs towards the developers and the industry. This charm makes 3D Dot Game Heroes unique in that it is fully aware of what it is, and it's a better game for it.

Getting back to the point about homage, 3D Dot Game Heroes is not just a Zelda clone—it is Zelda wearing a slightly different hat. Practically everything here is straight out of the original Legend of Zelda and Link to the Past, from fairies to hearts to potions to dungeons to an oddly bottle-deficient society to just about anything else that can be plucked from the franchise. Overworld with super-cheery theme song? Check. Dungeons mysteriously consisting of a series of connected rectangular rooms? Check. Boomerang? Check. There's no attempt to hide what this is, nor should there be.

By the nature of being a homage, 3D Dot Game Heroes serves as both an example of what made Zelda great and some of the things that the real franchise needs to do away with in order to regain its prestige. Most notably, the formulaic structure that has dominated the series since its inception could probably use a retinkering, the reward of an extra heart upon clearing a level still wrecks the difficulty curve, and the steady progression of dungeons can get a little monotonous. Still, I can't criticize the game too harshly for simply emulating the good along with the bad, but it was a nice bit of affirmation to see these things causing the same feelings as they did in a traditional Zelda game.

Ultimately 3D Dot Game Heroes does exactly what it sets out to do. It's a nostalgic look back at the classic Zelda games sprinkled with some commentary on gaming history, and a great example of retro gaming done right, even if it does keep the flaws along with the goodness. Rating: 7.5 out of 10.

Disclosures: This game was obtained via publisher and reviewed on the PS3. Approximately 6 hours of play was spent playing, and the game was not completed.

Parents: This game has not been rated by the ESRB at the time of this writing. Nothing here for the kiddies to be scared of.

Deaf & Hard of Hearing: There are no spoken lines or significant audio cues.

Okami is definitely the better game of the two. Twilight is the same game we have been playing for waaay too long.

The funny thing about okami is as much as i loved it, i think i was so tired of the Zelda formula i only ever made it half way through.

Good to hear, both in that they’re not unusually frequent, and that there’s an install option.

There’s also the option to install to HD. I did that, and then actually turned the load screens BACK ON so i could see all of the homages to old franchises.

They were a little annoying, but it’s nothing I hadn’t seen in other games, so it wasn’t a huge factor in my overall opinion.

How are the load times? I assume they’re no big deal since you didn’t even mention them, but I’ve heard on forums that they’re frequent/annoying. Is that accurate?

Haven’t played Twilight Princess yet and after having some troubles going through the much fresher Okami i don’t know if i am ever going to.
This game with its HD Boom Blox design looks interesting though.

I guess since I’m not interested in the original anymore, the homage won’t blow my mind either.