Being Dead Is Hard Work 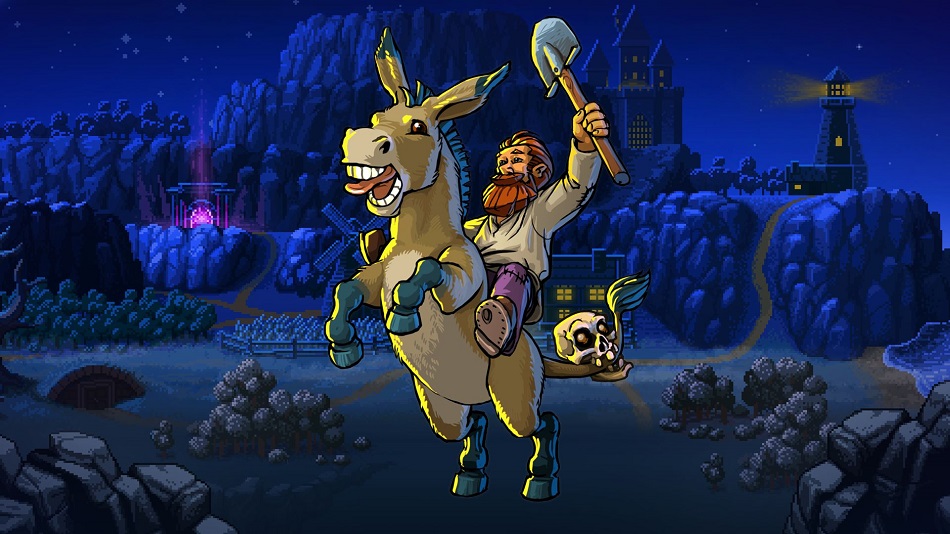 HIGH It’s like my childhood grew up with me.

I don’t often find a new game that bumps its way into my top ten, but Graveyard Keeper has managed it. It reminds me so much of things I played growing up like Harvest Moon and Animal Crossing, but includes enough wacky comedy and WTF humor that I was drawn into the story just to see what the next NPC would say.

Graveyard Keeper is a multi-directional scroller with classic 16-bit graphics. It opens with the main character dying and inexplicably awakening in a village on the other side. He wants desperately to return to his still-living wife, and the possibility seems within reach if he can succeed at being this new land’s graveyard keeper. Whether the other villagers are also dead is left unclear, and the player character quickly learns to stop banging on about being deceased and just do the job he’s been given.

Speaking of which, the player’s job includes maintaining a graveyard, expanding a church, and managing a small farm. Tasks to be done for various villagers also crop up, and mining for resources to craft and maintain tools is a big part of gameplay. Further enriching the formula are a tech tree and an impressive amount of map exploration as new areas are unlocked and new resources and abilities become available.

From the start, the dark humor and offbeat characters were my favorite part. A talking skull offers terrible advice unless the player gets him drunk. A communist donkey hauls corpses into town on a cart and gets argumentative when it feels undercompensated, giving his political views in favor of a trade system — the keeper’s carrots for the donkey’s corpses. 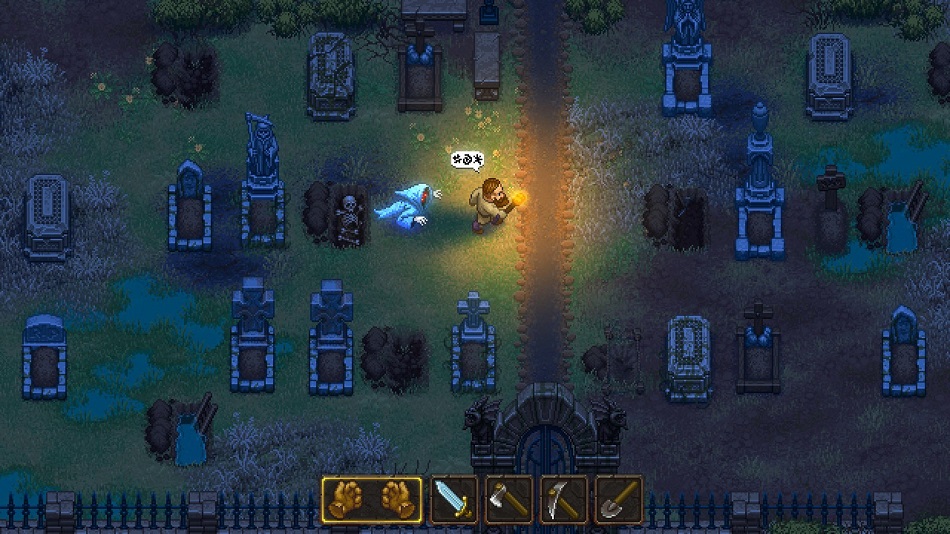 There’s also a lot of social commentary to be found in dialogue with the Bishop who just wants food, a general store that will sell human meat if there’s a profit, and a whole slew of townsfolk who have been ostracized for being odd. The incredible character dynamics make Graveyard Keeper a great experience.

The depth of Graveyard Keeper’s mechanics also blew me away. Little details like vendors depending on supply-and-demand systems made it possible to flood the market with my own products, and I was pleasantly surprised by how much actual thinking I had to do to progress throughout the game. Every task takes time and energy, and every resource has practical uses on top of possible profit, making Graveyard Keeper ultimately a game of balance.

On the other hand, there are certainly some downfalls. Graveyard Keeper initially seems a little too bleak as some of the first quests aren’t doable until much further down the line. I spent 15 hours trying to navigate questlines and tech trees, gather resources, and get a head start on upgrading my graveyard before finally completing the first quest!

Also, GK runs on a clock and the time available per cycle seems impossibly short for the amount of work to be done. Each in-game day is about nine realtime minutes split about evenly between day and night. Some NPCs are only available during one time or the other, or on a specific day. This made questing a bit frustrating when I was waiting for the next day the Astrologer was in town and unable to progress until they arrived, for example. 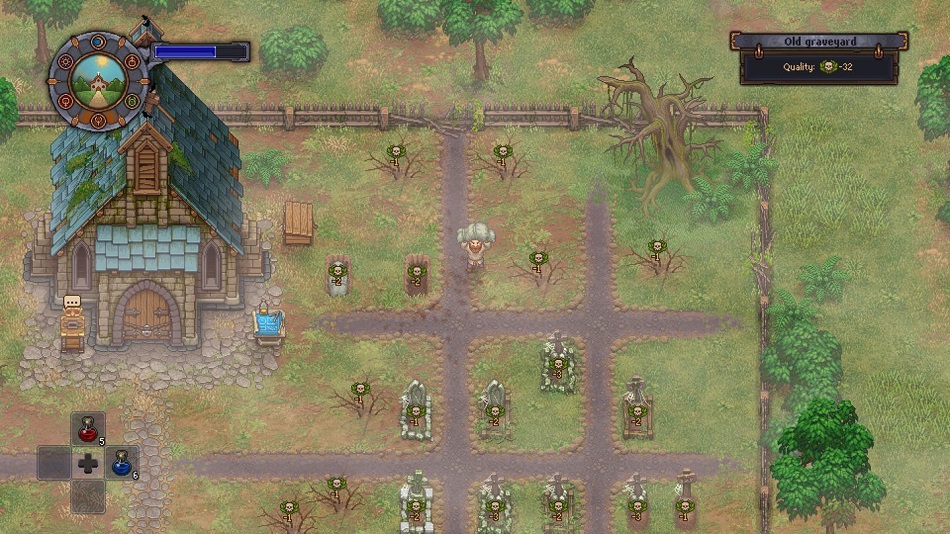 However, my biggest frustration with Graveyard Keeper is the dependence on trial and error. There’s little direction provided, and I found myself constantly referring to online guides and discussion boards. For example, when corpses are delivered, the player can complete autopsies to get meat, blood, and more from them before burying them in the graveyard for money and an improved graveyard rating. However, corpses come in different quality levels, and this changes their impact on the graveyard score. As it turns out, removing somebody’s meat lowers their corpse quality — surprise! Things like this need to be spelled out in the game itself.

Finally, there’s no concise way to track quests, and some NPCs only explain how to complete their tasks once with no way to recall the information later. Long-forgotten jobs were nearly impossible without those directions, so I was often looking up hints and advice on long-forgotten things like where to find a bucket of blood or how to use the “meat stamp” once I got it.

With all that being said, Graveyard Keeper does a great job of offering a complex world with a number of significant player choices — entire questlines can be accessed (or shut out) depending on the player’s responses to certain figures. One important example is whether the player chooses to work with or against The Inquisitor. Clues like The Inquisitor’s location suggest he’s important in getting the player home, but he wants your help burning witches at the stake. In agreeing to help him, I improved our relationship and unlocked new interactions. Saying no loses relationship points but earns money instead. The same is true of other figures, like The Merchant. Picking a fight with him locks the player out of establishing a business agreement until they can bring back a hefty sum of money in reparations.

Originally, I had planned to write this review after I completed Graveyard Keeper, but after 100 in-game days I still have a ton of quests left, two Church expansions to build, and at least one area left to unlock. I’m not sure how much left there is to this one because it’s the sort of experience that hides its true scope, but I can say that it’s one I have a hard time putting down and I’m looking forward to (hopefully) reuniting the Keeper with his wife. Rating: 7.5 out of 10

Disclosures: This game is developed by Lazy Bear Games and published by tinyBuild. It is currently available on PC and XBO. This copy of the game was obtained via publisher and reviewed on the XBO. Approximately 15 hours of play were devoted to the single-player mode, and the game was not completed. There are no multiplayer modes.

Parents: According to the ESRB, this game is rated T and contains Fantasy Violence, Mild Blood, Mild Language, and Use of Alcohol. There’s also a lot of cannibalism and dark jokes about death, religion, and politics, although it’s generally non-graphic. Witches are burned at stakes on-screen, but there’s no screaming or blood. Corpses and autopsies are commonplace, including the novice removal of various body parts, but the bodies themselves aren’t shown.

Deaf & Hard of Hearing Gamers: All dialogue in Graveyard Keeper is subtitled in speech bubbles and continues when the player presses a button (player-controlled pacing). The only sound cue in this game was upon delivery of corpses and there were some visual cues to mediate this, such as the corpse cart arriving and leaving through town and a counter that displays how many bodies are in the mortuary when the player approaches. The subtitles/fonts are not changeable and a bit small. 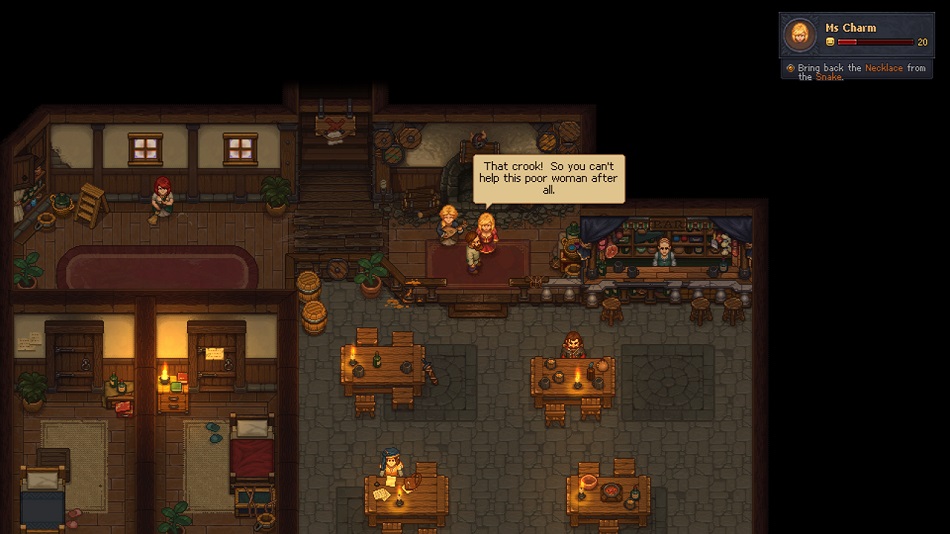 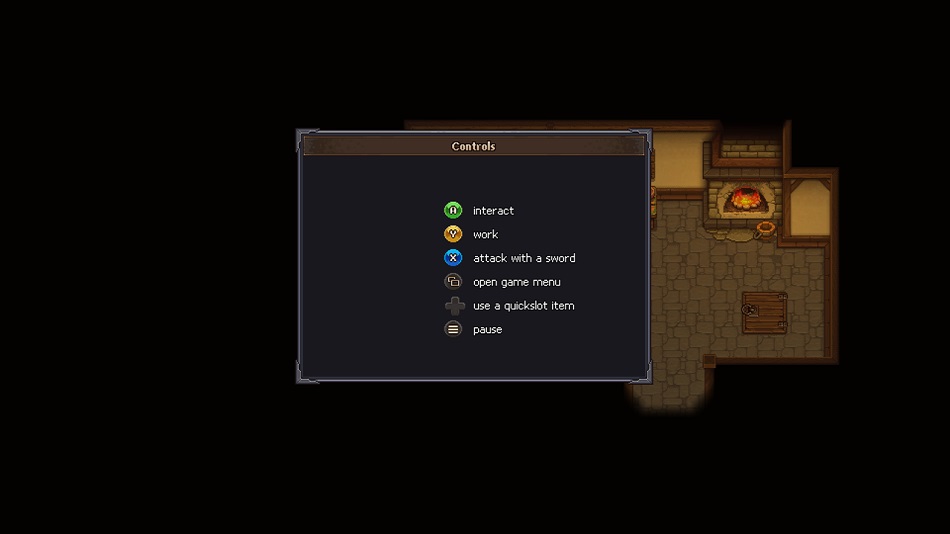 Rebekah first found GameCritics doing a research paper about accessibility in videogames, and was intrigued by the standards found on the site. Seeing an opportunity to combine a love of games with a love of writing, Rebekah reached out and has been writing for GC since then.
Latest posts by Rebekah Cheeley (see all)
Tags: Graveyard Keeper Lazy Bear games PC Rebekah Cheeley review Tinybuild Xbox One
Subscribe
1 Comment
Newest
Oldest
Inline Feedbacks
View all comments