Looking Back At Right Now 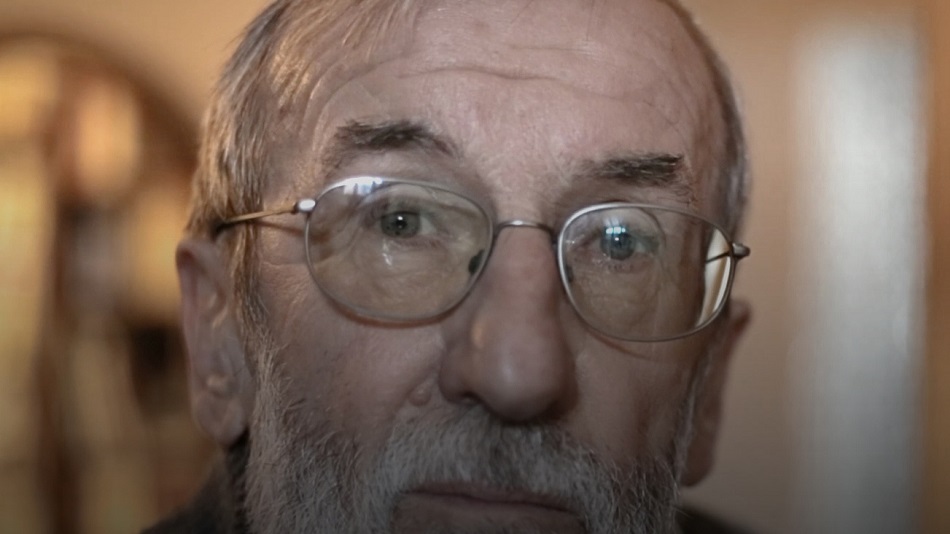 HIGH The gut-wrenching journeys of so many people.

LOW Lack of direction regarding the player’s goal.

Attentat 1942 does a beautiful job exploring a tragedy with all the respect and sensitivity that its survivors are due. Diving into the devastation of World War II through the perspectives of Czechoslovakian citizens, this game allows players to experience the testimonies of survivors in the year 2001, looking back at a time they won’t ever forget.

As the granddaughter of a resistance fighter in Czechoslovakia who worked against Hitler’s regime and the Nazi occupation, the player engages in interviews and explores old documents to try and piece together precisely what happened to their grandfather who disappeared for a time during the war. In modern day, the grandfather is in the hospital and declining quickly, so there’s not much time to piece together his history and bring him comfort in his dying days.

The narrative is told through documents and videotape footage of real people talking about their experiences, although it’s not totally clear whether they are playing characters or relating actual facts. In either case, it seems clear that the boundary between fiction and reality here is meant to be blurred, and it’s quickly apparent that each character only has a shred of the story.

Nearly everything written in the game is in German or Czech, and the language spoken is Czech, with very large, clear English subtitles across the bottom of the screen. It’s a strong choice to not dub, and I was often left feeling that this is not a story I am meant to be part of. Something about hearing tales told in the native language of the people who lived it is humbling, and left me wondering what stories I might tell in my old age.

In terms of design, Attentat 1942 has a slow start and doesn’t play much like a game in the sense of offering exciting action or drawing players along a deeper plotline. In general, players will engage in minigames ranging from choosing the best questions during an interview to something like solving a seek-and-find style puzzle by cleaning up messes in an old house. 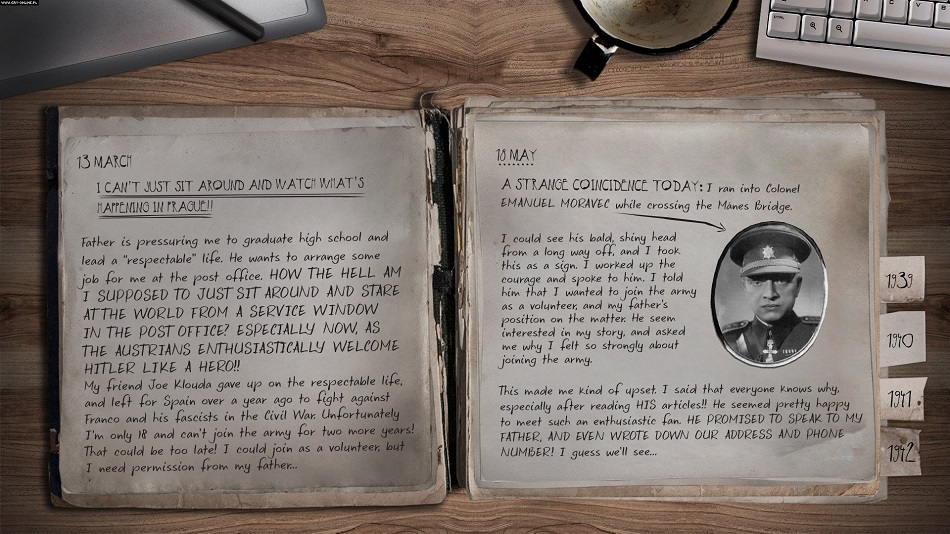 My favorite minigame involved time-sensitive dialogue choices. A person would state “I was scared, but I managed to get out of it when I said..:” and then the player selects dialogue choices piece by piece to form a response. Selecting the right choices would give the player a coin (used for second chances at an activity if they fail) and a satisfied storyteller who was proud of their quick thinking during that memory. Failing would mean no coin earned, and the interviewee might say something quite different, or seem less satisfied with their account. With a variety of approaches in its content, Attentat 1942 allows the player to see the sort of quick decision-making and careful wording that real-life people had to make.

More often than anything while playing, I was struck by the emotions of the featured people and the themes they identified. One man explained that good people sometimes do terrible things because it’s easier than standing up against them. A woman said that it’s hard to see the point in resistance when the only result seems to be misery, despite her husband pointing out that there would be misery either way—how do we know in the moment what will be the least harmful?

The thing is, we can’t ever look into the future. Bound to a linear timeline, we can only see what’s happening now and what happened in the past—and only a fragment of those things. Attentat 1942 brought me to tears several times when I was witnessing  people who experienced tragedy but didn’t know it until much later when they were recalling how they survived, the decisions they made, and how they live with themselves now. This hit me because we’re all going to get old someday, and we’ll all have to look back and justify the actions we’re taking today. Whether we’re kneeling during the National Anthem (or not) or standing our ground to defend the Second Amendment (or not) we will inevitably be asked to justify why we did what we did.

Attentat 1942 focuses on people who made hard choices and lived through hard times during World War II, but what stood out for me is that the parallels to our own time are so clear. When I’m in my 80s and telling my grandkids about the boy who said mean things to me, or about the girl who thought it was funny to push me, the people who did those things are likely going to be telling their grandkids that such behavior was normal at the time, and they can’t be judged or held accountable. Similarly, I don’t think we realize we’ve survived something until someone else points it out afterwards, because it was just another phase of our lives.

There are lessons to be learned in Attentat 1942. Whether on social media or on the streets, there’s something to be said for taking a stand in the world. It might be hard to see it now, but we can only hope that in fifty years we’ll we be proud that we were talking about #YesAllWomen and #BlackLivesMatter and #LoveIsLove because we changed the times… or perhaps the times will change us? Attentat 1942 is a welcome wake-up call showing that it’s impossible to look into the future, but we can recall our past, and when doing so, good people are going to wish they had something better to say for themselves than “I didn’t know what to do.” Rating: 8.5 out of 10

Disclosures: This game is developed and published by Charles University and the Czech Academy of Sciences. It is currently available on PC. This copy of the game was obtained via publisher and reviewed on the PC. Approximately 1.5 hours of play were devoted to the single-player mode, and the game was completed. There are no multiplayer modes.

Parents: According to the ESRB, this game is currently unrated. This game was generally non-graphic although the content was very heavy, and did imply or refer to rape, gun violence, promiscuity, and directly discussed genocide during and after the Holocaust.

Deaf & Hard of Hearing Gamers: All dialogue in this game is subtitled with fairly large, clear subtitles. There are no captions, but there are visual demonstrations of most sounds (like exclamation points to show sudden noise in comic cinematics, or a shaking screen when the rumbling train goes by, etc.). Deaf and Hard of Hearing gamers should not experience trouble playing this game.

Remappable Controls: No, this game’s controls are not remappable, but the only controls are left-click and space bar.

Rebekah first found GameCritics doing a research paper about accessibility in videogames, and was intrigued by the standards found on the site. Seeing an opportunity to combine a love of games with a love of writing, Rebekah reached out and has been writing for GC since then.
Latest posts by Rebekah Cheeley (see all)
Tags: Attentat 1942 Charles University Czech Academy of Sciences Documentary indie PC Rebekah Ocker review WWII
Subscribe
1 Comment
Newest
Oldest
Inline Feedbacks
View all comments

This is an excellent review and very helpful in playing. I have played some of the game but do not quite get the hang of it. I am 80. I found out 10 years ago that my grandmother and great grandfather and two great uncles and an aunt were Jewish. My great grandfather came to the US in 1912, probably to escape antisemitism and hard times. He missed the Holocaust that killed his 10 siblings. What would we do? We need to do what we can while we can. Thank you for the review.