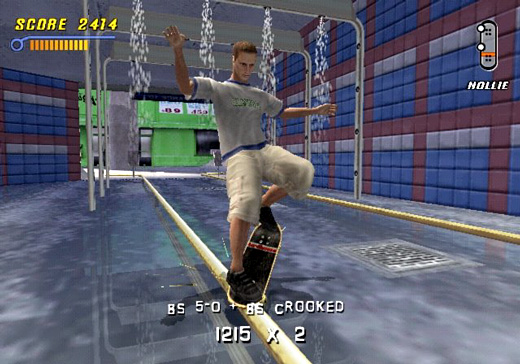 Back in 1999, when I first got my hands on the Tony Hawk's Pro Skater demo for my PlayStation, I knew that I was in trouble. I played it for hours, trying to improve my scores and seeing what crazy combinations of tricks that I could muster. I'd never ridden a skateboard—and I still haven't—but games like Skate or Die on the Commodore 64, Top Skater in the arcade, and even Street Sk8er for the PlayStation put me in a position where I could actually be that cool guy on the board without breaking every bone in my body. Pro Skater had that certain something, though… it was an addictive mix of intuitive controls, easy-to-learn gameplay, and competing for high scores. After spending hours on the demo, I bought the retail game in September of 1999 and the rest was history.

Some players hail Tony Hawk's Pro Skater 2 for the PlayStation to be the best game of the series, and I can certainly understand why it's so well-liked. Adding the manual to gameplay, which allowed for longer trick combos and higher scores, was just one of several improvements over the original. Skater abilities were now improved by finding and spending cash to buy stat points, instead of automatically upgrading after certain points in the first game. The ability to build your own skate park was pretty amazing, and players could create their own skaters for the first time, as well. I'll admit that I spent more time playing Pro Skater 2 than I did Chrono Cross, and since both games were new at the time, that was of personal significance.

Although it was the first of many games in the series to hit the PlayStation 2, Pro Skater 3 was the perfect balance between the old and the new and remains the most accessible Tony Hawk game ever created. For my first PlayStation 2sDay column, it's time to take a look at five reasons why I consider Pro Skater 3 to be one of the best skateboarding games around:

The addition of the revert move in Pro Skater 3 allowed for some of the longest and highest-scoring lines ever devised. By pressing either the L2 or R2 buttons just after landing on a half-pipe, players can continue to link tricks to a chain. Add this to the manual that Pro Skater 2 introduced, and scoring combos of 100,000 points or more becomes not only possible, but likely. You're going to need to master both moves in order to meet some of the scoring goals in later stages of the game. Believe me.

Pro Skater 3 was the first game in the series to have just the right level of difficulty to beat the game 100%. Sure, you could technically "beat" the first two games without getting all of the tapes or cash, but Pro Skater 3 was all about goals when it came to progression. The secret tapes weren't terribly difficult to obtain, the scoring parameters were fair (especially with the new level design that allowed for some very high scoring), and none of the goals were really frustrating to achieve. That's not to say that the game is a cakewalk by any means, but the challenge level just felt right to me and allowed for multiple playthroughs with different skaters. I also liked the decision to get rid of cash for stat upgrades and replace it with item pickups. 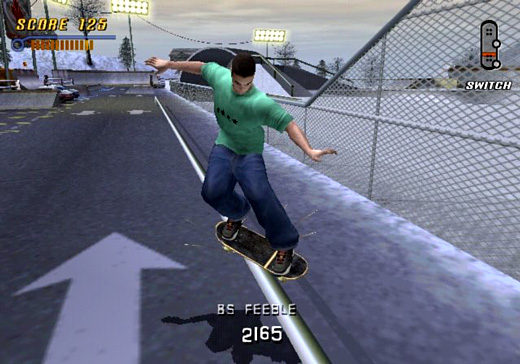 For the first time, mostly because of the PlayStation 2's more powerful hardware, we saw a Tony Hawk game cruising at 60 frames per second. This significantly raised the speed of the game, as well. Seeing all of the different tricks executed with such smooth animation was especially satisfying when the game first debuted, as we'd been accustomed to a much choppier frame rate of about 30 frames or so per second. There are other more subtle touches like lighting and blood effects that look a lot better as a result of the stronger hardware. The funny thing about the Tony Hawk games from this console generation as opposed to the PlayStation 2 generation is that the frame rate has actually dipped back to 30 after Pro Skater 3 had set the bar nearly a decade ago.

One of the best things about Pro Skater 3 is that there's more to see and do after playing through the game. Multiple replays are rewarded with changes in item placement and new content. It's not the same game twice, at least in terms of collectibles and strategy, so it was worthwhile to play once through as your favorite skater, again as a created skater, and at least once more as a hidden skater. Since the game's difficulty was pretty reasonable to start with, it's fun to play through again and maybe collect a couple of those stat points that you missed last time. It's this kind of replayability that keeps Pro Skater 3 in my gameplay rotation with regularity.

Pro Skater 3 was the last of the games in the series that held fast to timed runs and accomplishing goals quickly, and that is the formula that has always worked best. From Pro Skater 4 and on, Neversoft took a more reactive approach and made the Tony Hawk games more open, similar to the sandbox structure in Grand Theft Auto III. This was never a good move for the franchise, and it was evident by seeing Classic Mode additions to later games which almost seemed to be letters of apology to fans who disliked the new direction. Timed runs keep the tension high and allow for quicker gameplay sessions rather than meandering around an open area and hunting down missions to undertake. Criterion took a similar approach with Burnout Paradise after a series of successive sequels and reaction was quite mixed. The bottom line here is that Pro Skater 3's success comes in no small part from adhering to the same formula that made the earlier games successful without making wholesale changes. The series has not been the same since, in terms of quality, accessibility, or fun.

It's fitting that PlayStation 2sDays have kicked off with what is still one of my favorite games of all time, on the PlayStation 2 or otherwise. Pro Skater 3 still plays as well today as it did in late 2001. It's still satisfying to pull off huge combos and scores, and the gameplay is still as easy to learn and difficult to master as ever. You can Get Chuck Unstuck, travel the world by grinding through country flags at the Airport, and trigger a game-changing earthquake… all from your favorite gaming chair. I'd love to hear about your Tony Hawk's Pro Skater 3 experiences. What do you remember about it? Did you ever try the online play? Who were your favorite skaters? Do you still own the game today? Post your comments, memories, experiences, and other stuff below and share!

If you have any suggestions for games that you'd like to see covered in future installments of PlayStation 2sDays, feel free to drop me a line at gameguypeter@gmail.com and I'll see if I can put it in the rotation. I'm working on building my PS2 collection this year, so if I don't have the game you're looking to see covered, I can add it to my wishlist.

See you next 2sDay!

I completely agree with your THPS3 sentiments, though my experience came on Gamecube at launch rather than as a PS2 title. Your thoughts on the difficulty, replay value, and timed runs mirror mine exactly. In addition, I loved the sense of humor the game had. It had the right amount for a THPS game. Some later games (i.e. THUG2) went way too far over the top. Characters like Chuck and the Thin Man were great, but my favorites were the announcers in places like the airport and cruise ship. It was worth turning down the soundtrack volume just to hear… Read more »