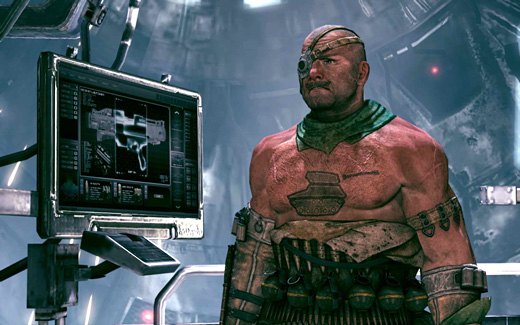 Rage was one of the games that impressed me at E3 back in June. It had a Borderlands vibe to it, but substituted more realistic graphics than the cel-shaded approach that Gearbox Software had taken. The game ran at 60 frames per second, even at an early stage, and was fun to play. My interest level shot up for Rage, and it had been on my wishlist with growing excitement.

Unlike the recent Online Pass trend of locking out multiplayer for used consumers and renters, id Software and Bethesda have decided to target solo players instead. Consumers who buy new will get a one-time use code to unlock secret areas via sewer hatches. Players who don't buy new will not have access to these areas, and it's possible that this code will not be available via DLC. These sewer hatches are said to be loot caches and are "outside the main path".

That quote is from id Software's Tim Willits. Here's a gem from the same piece:

We're not detracting from anything. But I know some consumers, when you can't avoid it, then you get a little touchy subject.

In other words, he knows that this isn't going to be a popular move with consumers… but he really doesn't give a damn. The Industry Defense Force is quick to defend Willits here because, after all, people who buy used or rent games instead of buying new aren't consumers at all. Those people are basically pirates, but without the whole issue of breaking the law.

Here's something for you all to chew on, and I sure as hell hope that I'm not right about this: I believe that this move is the continuation and maturation of an assault on solo players. We've already seen the first shot fired by Rockstar Games via L.A. Noire with its varied retailer pre-order DLC, which didn't allow users to purchase the full game at the time of initial sale. This move began the process of eliminating single-player content in exchange for more money than the $60 asking price. Electronic Arts took a different approach to ransoming the overall quality of the single-player experience in The Masters: Tiger Woods PGA Tour Golf 12 by forcing players to make a choice between buying DLC courses for certain events on the PGA Tour schedule or being forced to sit out that week and forfeit the chance to earn any points or money for that week.

Now we have this move by id Software, which may seem like a minor thing to many… but sets the table for more punitive ransomware actions for all but those who buy new. Locking out loot caches is only a start. What will be next? Could publishers lock out replay value by disabling the game after beating it unless you enter a code? Could entire levels be locked away, saved only for those who buy new? How about locking endings if a code is not entered? The Industry Defense Force claims that this isn't a big deal, but it's more of a "deal" than it was even a couple of years ago… when it didn't even exist. Now it's a deal that almost assuredly is going to get bigger as publishers search for more ways to settle the score with GameStop for not getting any kickbacks for used game sales.

That's the funny thing in this whole mess. The industry either can't or won't go after the source of their grievance, so consumers are not only caught in the crossfire… but they're now the active targets in this War on Used Games. The Industry Defense Force likes to use GameStop as the source of all wrongdoing in the used games market, but they seem to either forget or deny the fact that many other resale destinations exist. When Best Buy opens up their game stores-within-a-store, does anyone think that checks will be cut to game publishers whenever used games are sold? I hope not. Do individual used game sellers on eBay, Craigslist, or auction sites write checks to publishers after a sale? Nope. Does anyone see Amazon making payments to publishers when used game revenue comes in? I didn't think so. Despite all of this being true, people sure love nailing GameStop to that crucifix of blame. Double standards for the win.

We've come to this. The industry apparently has no way of getting its debatable just rewards from the resale of its games, so they've decided to punish the consumer instead… and locking multiplayer action was only the start. This is a brand new slippery slope that the industry has begun to descend, and there aren't the excuses of online maintenance costs to fall back on when you start locking single-player content. It's now a flat-out "Pay us or screw you" mentality for the industry, and there's no way that this doesn't get worse as time goes on. Once you start down that road, there's no turning back. Just wait until we find out what the Online Pass for Batman: Arkham City—a single-player only game—entails.

I do wonder how long we'll keep subscribing to the "It's only…" mentality:

It's only entertainment. Maybe there are cheaper alternatives.

[quote=crackajack]Comparing to a used car is just wrong. A car gets rusty, has to be constantly maintained to stay in a proper condition. A game stays always intact, except for a hard drive error or a disc error. Like in the minidisc commercial… the actual product is always perfect so those passes stuff is correcting the issue by giving the used game buyer what all other used buyers get: A not anymore perfect product.[/quote] To think a used game disc is exactly the same as a new one is absurd. A game does not always stay intact. It is just… Read more »

[quote=Anonymous]The way that we as consumers can do this is quite simple, buy quality DLC.[/quote] Yeah, buy content that you think is worth your money. Only systems that have success, despite being debatable in many cases, only when there are customers who accept the price and all the features included, it will be continued. Is Rage without the underground mission still worth the used game price? Are used game buyers really screwed? Of course this is only the first step. But i would have no problem in limiting the market in the end to either you like the game and… Read more »

I think we need to accept that this type of first purchaser incentive isn’t going to go away. What we can do, though, is encourage publishers to do it in the least negative manner, which I believe is providing codes for DLC. The reasons for this are twofold: Firstly, early DLC is generally content that was cut from the main game to save development time, and as such the game is usually completely unaffected by its presence or otherwise as the seams where that sequence was removed should have been smoothed over anyway. The extra character Shale, in Dragon Age,… Read more »

Crakajack, You provide some interesting feedback. In regards to the comic books, I was trying to point out in comic book stores, a large portion of their stock seems to reside in trade paperbacks/hardcovers. So the comic book companies, due to these trades, are able to keep some portion of their property in “new” status to keep customers in wanting the “perfect product” at some nominal price (compared to purchasing a “mint” comic or some “9.5/slabbed” comic, which can be rather high). I wonder if this “Used Game Controversry” will only be ultimately resolved when each new game, purchased at… Read more »

The consumers control the market. Blaming the industry for not selling the goods you want is sort of ignorant. DRM actually gets (in steps) accepted, on PC definitely faster than on console, but the strategy using DRM for all kinds of bits and pieces just works, so blame yourself and or your friends. I remember you also bought Borderlands incl. DLCs and blamed them afterwards that the DLC is not on the disc. Why did you buy it? Your wallet speaks loud, not your very much broken record articles. I won’t buy UBI-always on, i buy Live-Arcade-games, i buy via… Read more »

– What about used Comic Books? Are Marvel and DC going after comic shops and conventions for sellings used books? Nope. Marvel and DC keep reprinting popular series and stories, usually with never before seen artwork or some such enticement. – What about used DVDs? I’m having trouble comprehending what makes the used Video Game market such a hotbed? Could it be profits? Ten years ago, no game company gave a flying hop what I purchased at Funcoland. What if the game companies re-released the game with some additional DLC included? No..wait..some already have done that (bravo to those that… Read more »

Game companies who practice this stupidity should think: It’s only extra content that has no impact on the game, so why spend time and money developing it? Every single consumer (not just gamer) should be outraged by this practice. To think that companies have any right to profits from any used sales, is moronic. It would be like a car company somehow preventing used-car sellers from including power windows to the people who buy used. That feature is only for people who buy new! What a crock. These game companies are treading some choppy water and better hope these things… Read more »