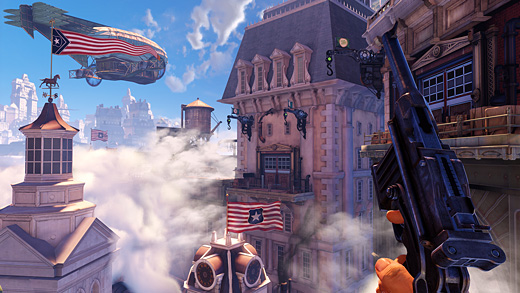 Here are some things that I took away from what I saw of the Video Game Awards (VGAs):

That stuttering framerate during the gameplay footage was enough to make me cringe. Had I been watching the event online, I might have thought it was my connection… but I was watching on cable TV. The framerate problem was with the trailer, and that's more than a little disconcerting for a game that's slated for release in a little under four months. It doesn't look as crisp as it did when I saw it at E3 back in 2011. Granted, graphics aren't the whole story, but this was not a good impression to make so close to launch.

The Last of Us continues to impress.

Naughty Dog sure knows the PlayStation 3 hardware. New footage looks fantastic, and the pedigree of the development team gives me even more of a reason to look forward to the game's release in May. I'm not as big on the zombie trend as many others are, but I'm intrigued enough to follow this game a lot more closely in the coming weeks and months.

Awards? What awards? Here's a friendly piece of advice for the VGA team.

If you're going to call a show the Video Game Awards, try giving more than 20 minutes of the two hours to actual awards. As the telecast ended, some of the awards hadn't been announced. That makes zero sense. It's like seeing the Grammys end with a postscript during the local news that follows it mentioning some of the awards that weren't mentioned. Time management is not a difficult concept; if you're going to keep "awards" in the title, then work them into the telecast.

We get it. People who play video games are considered "nerds." It's been that way for years. When I hear phrases like "from zero to nerdgasm" or Zachary Levi trying to play his "nerd cred" card by addressing the audience as such, I look at the last ten years and see zero progress despite the ranks of those who play video games getting progressively larger. We're normal people, honestly. We can be addressed as such. Stop trying so damned hard with "nerd culture."

Video games are changing, whether I like it or not.

The Walking Dead won Game of the Year. Journey won PlayStation 3 Game of the Year. Viewers and gaming press reacted with cries of joy and elation. These games are critical darlings, breaking the mold of what we've considered video games to be. There's more of a focus on games being art, about games forcing players to sense some kind of emotion, and about a departure from what we've been used to. As a game player, I am not at all interested in these things. I don't play games to get emotionally invested in the characters. I'm far more interested in action as someone with arcade tendencies than I am with a point-and-click adventure. I think that I'm reaching a crossroads in console gaming where games and game design are going one way and I'm going in a completely different direction. It's unfortunate for me, but not a bad thing for the industry at large. Games are growing up, even if I don't want to. At least I'll have older systems and games to play and enjoy the way that I prefer things to be.