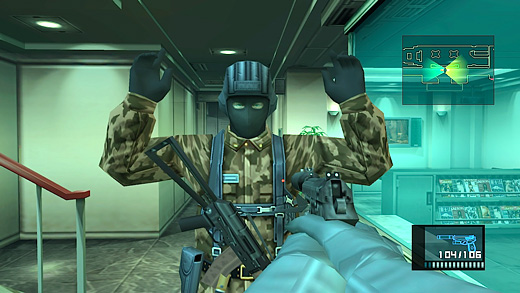 I finally got my hands on the Metal Gear Solid HD Collection this past weekend, thanks to a decent trade-in promotion. It's the first new game that I've picked up since Sonic Generations back on November 1st, and I was excited to get it since I've been a pretty big fan of the Metal Gear franchise since playing Metal Gear Solid 13 years ago.

When I got home from the store, I was looking forward to popping the disc into my PlayStation 3 and seeing how the games looked in HD… but upon reading the disc, I got the message that I've seen way too many times over the course of this console generation:

A 60MB file for three games that already existed.

Combine that with my slow internet speed, and the required update took long enough to kill my enthusiasm and I shut the console down when it was finally over. I haven't turned it back on since, and am not sure when I will. It was a complete buzzkill… almost like some sort of penalty for wanting to play games from the last console generation on a new platform.

We've come to just accept that updates—including ones that occur the day that games hit stores—are the way it is. This is after years of console video gaming when publishers shipped games knowing that they had to get it right the first time, or else risk defective returns and consumer backlash. Bugs in games from generations past were frowned upon and negatively affected not only reviews, but consumer experiences. These days, we expect bugs in our games because a patch or update will inevitably fix most problems. It's as if the responsibility to ship bug-free games has faded and is no longer recognized.

When I've talked about my stance on this, I've run into pretty staunch defense:

I get that sometimes things can get missed and that constant connectivity allows these things to get fixed without returns or recalls. It's a great tool, but why do we see this so much and so early? It's like DLC in a way. Good intentions at first, but has become overdone and questionable as time goes on. Games like The Elder Scrolls V: Skyrim, for example, get shipped with bugs that get explained away because of the game's size and scope… then forgiven because of a patch that not everyone can access. Sure the game is big, but PS3 owners seeing performance issues because of save sizes got through QA? Really? Look at the 100+ MB Day One patch for Battlefield 3 on the Xbox 360. Why is this even excusable? Even high-speed internet users endure a window of waiting instead of being able to get into the game that they just spent $60 on.

You know, you wrote off those pretty strong arguments without much thought.

It really is a matter of “deal with it”. You obviously aren’t a PC person, which is fine. However, updates are a very regular thing on PCs. The fact that it finally started to creep onto consoles isnt really a big deal. It blows my mind that people care so much about this.

And again, you don’t NEED to download it, unless it is an online game. If you don’t want to get the update, then don’t get it.

Although I share your frustration (also having a PS3 and a slow internet connection), I tend to just skip patches when I’m sitting down to play, then leave them downloading overnight. I’ve got a 90meg Skyrim patch waiting to d/l – I ignored it last night as I only had an hour or so to play, but I’ll leave it downloading at a more convenient time. The only time it’s anything more than a minor annoyance is if it impacts my ability to sign in to multiplayer (like MW2).

Peter, well, I agree, sort of… What I am pissed about even more are Online Passes, another fuck-you-dear-dumb-customer-measure. But, on topic, I also have to say, aren’t you just a little bit overreacting? Is the real problem here not the (rotten) game-industry, but gamers who buy 60$ games? If I would pay a 60$ new game and I’d need a 100mb+ patch I’d also be irritated. But then: just don’t. I buy my games second hand. Then they’re cheaper, and most bugs/problems are patched/solved… I mean, there is so much more wrong in the videogame industry… Like, total lack of… Read more »