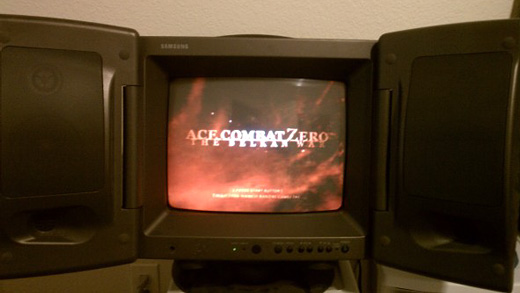 After spending the balance of the last three years in storage, I finally set up my Samsung GxTV this past weekend.

It's here in my office, just to the right of my workstation. Despite literally thousands of hours of use, the GxTV still works. The picture isn't quite as sharp as it once was, but it's good enough to make my PlayStation 2 (PS2) games look great again… as opposed to seeing the graphics so stretched out and muddy on my high-definition set in my living room. I also moved my PS2 in here, and after spending a few hours playing games on the GxTV over the weekend, I can happily say that what's old is new again.

Here are some shots of the GxTV:

Perhaps the best part of the GxTV is the sound that this television set produces. As you can see, the speakers fold out and there's a sub-woofer just behind and above the back of the set. The bass is deep and the volume is impressive; it's exceptionally loud even when the volume is raised to just 1/4. There are also a couple of simulated surround settings for the sound, which are just different enough to give each a try. No matter which game you play, it sounds fantastic. For late nights, the headphone jack in the front of the set is perfect… and it, too, still works after nearly 15 years.

The GxTV isn't a total slouch in the picture department. The screen is small, but it's perfect for a personal-size television. The color is still good, and it displays PS2 graphics with decent sharpness. A game like Ace Combat Zero goes from looking blurred and stretched on my 48" Samsung 1080p set to sharp and still impressive on the GxTV. Unfortunately, my personal photography skills and the Droid Incredible camera that I used for the shots above really don't do the picture justice when it's in motion. The games look great, and it's a trip back to the late 1990s and early 2000s for me. 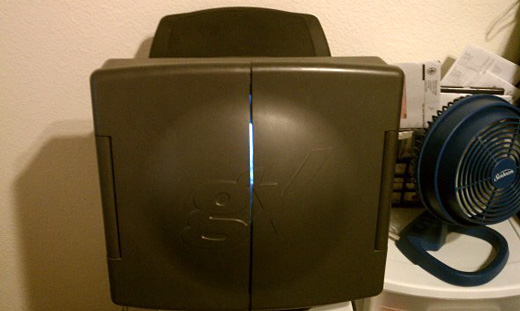 I bought this GxTV from Electronics Boutique back in 1997. I had heard about it in various video game magazines and just had to have one. Since then, it's followed me wherever I have gone in my travels and has consoles like the original PlayStation, the Nintendo 64, and the Sega Dreamcast plugged into its AV inputs in the back. Sadly, one of the two AV inputs was damaged and no longer works… so I'm left with one. Thanks to AV splitters, though, that shouldn't be a problem should I end up adding other classic consoles to my collection in the future. Undoubtedly, this TV is the way to go with my retro consoles, and I'm glad to be putting it to good use once again.

While I'm talking about PS2 games, here are the games that I added to my collection this weekend after trading in some current-gen games towards them:

Chulip, Viewtiful Joe, and Viewtiful Joe 2 were still new copies, although they were the display copies and were open. It's also worth mentioning that the copy of Street Fighter Anniversary Collection that I got was in great shape. Sadly, two other games that I got—Xenosaga: Episode I and Yakuza 2—were scratched and defective, so I'll have to return them this week and find other games. I still have over $50 in store credit left to spend my building the PS2 collection, as well. All in all, it was a good haul.

Man I thought I was the only one that had one of these. I got one back in the day to play my Dreamcast, N64 and PSX stuff. It’s hasn’t been used for the more recent consoles and certainly not the HD ones. But it was a great little machine. I hope Sony’s answer to this TV will be as accessible for the HD gamers.

Peter, out of curiosity did you try hooking your ps2 up to your hdtv using component cables? When I did that the picture was much nicer than using the standard a/v cables on my hdtv.