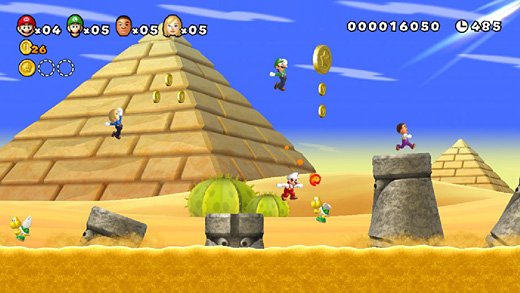 If you're a console gaming fan, like I am, you probably remember where you were when the name and specifics of Nintendo's Wii follow-up were announced. I was in a Starbucks on the morning of June 7th, a few hundred feet from the Nokia Theater where Nintendo was holding its press conference. I also remember exclaiming out loud something to the effect of, "That's really what they're calling it? Wii U? No. NO!"

I started to make judgments in my head immediately. The controller looked like an iPad. The name was just weird. My hopes were a bit dashed that this new hardware was going to be as great as many were hoping. I was hoping that I'd get to see a little bit of it during our KmartGamer session with Nintendo, but I'd already registered a first impression.

It would be proven wrong.

We were introduced to Wii U in a locked room. When I was able to touch and interact with the Wii U controller for the first time, I saw a lot of potential that wasn't there with the initial announcement. The controller may look awkward or heavy to hold, but it isn't. The screen was capable of some pretty sharp video output, and seeing the Legend of Zelda demo running on the television screen—and then seamlessly moving to the Wii U controller's screen—was remarkable. Being able to adjust the lighting on the fly demonstrated the impressive nature of the visuals, and removing the heads-up display from the main game screen and instead using the controller's screen was a great idea. It felt like a console version of the Nintendo DS experience, and the possibilities that ran through my head regarding what Wii U could do quickly added up.

The highlight of the gameplay session that we had was with Chase Mii. A cross between hide-and-seek and early maze game ideas, Chase Mii supports up to five players. The player with the Wii U controller gets a short headstart and runs into the distance, using the map on the controller screen to see the locations of the other players and an overhead lay of the land. The other four players have to find and chase down the Wii U player, using on-screen distance cues while watching the screen to see if a glimpse of the escaping player can be had. There is a Power Star power-up that the Wii U player can obtain to make him or her invincible and run faster, but getting that power-up can be dangerous if pursuers are waiting there. It's reminiscent of the Care Packages in the Call of Duty games; if you get one, it can be a huge boost… but don't think that opponents aren't there waiting for you. The game ends when either the Wii U player is caught, or if that player eludes capture for a set period of time. It's deceptively fun and addictive; each of us on the KmartGamer team had a try with the Wii U controller and we all seemed to be in agreement that our initial judgments about the Wii U were off-base.

Although I came away impressed with the technology, there are still major questions about the Wii U that can only be answered as we get closer to the release date for the hardware, which is nebulously scheduled for 2012. The first hurdle to be cleared is pricing, and given that Nintendo CEO Satoru Iwata is on record saying that the Wii U will likely cost more than $250, this is a huge hurdle to clear. The Wii had the distinct advantage of being the cheapest console on the market back in 2006, but will not have the same advantage in 2012 in a more challenging economic climate. There's also the issue to launch software. The stumbles of the 3DS during its launch window should remind Nintendo that strong IPs must be leveraged at launch for the platform to have a chance to succeed, especially given the potentially expensive nature of the hardware. Lastly, there's a question about the Wii U controller itself. If there's only going to be one included, there is uncertainty about how games will adapt to using only one along with some legacy Wii controllers.

The lesson to be learned here, however, is that Nintendo can't be counted out. It's far too easy to make early judgment calls and be completely wrong about something, and the Wii U is proof of this. If Nintendo can pull things together and release the platform at a reasonable price that won't scare consumers to the competition, there's a lot of potential here. The trailers show a myriad of possibilities for Wii U, but this promise absolutely needs fulfillment.

[quote=Modern Angel]So, E3 2012: the new XBOX is announced. E3 2013: the new PS is announced. The window in which Nintendo has to convince gamers to switch from Wii, PS3 and XBOX360 to Wii U is very small.[/quote]I think I am in the minority, but I don’t think new machines from Sony and Microsoft are coming that quickly. To usher in the HD era, Sony and Microsoft bet hard on tech and the results were a $400 from Microsoft and a $600 from Sony. Even at that price Sony and Microsoft lost tons money on that hardware. It’s only in… Read more »

with the Wii U is that the pure power of the console does not surpass PS3 and XBOX360 by very much. So, E3 2012: the new XBOX is announced. E3 2013: the new PS is announced. The window in which Nintendo has to convince gamers to switch from Wii, PS3 and XBOX360 to Wii U is very small. In 2013, Wii U will be what the Wii is now: an innovating console that lags behind in performance, making gamers buy the new XBOX and the new PS instead, which will probably be significantly more powerful than the Wii U. I… Read more »